The Lord’s Prayer has been a staple for so many Christians around the globe for centuries. For many of us, it was one of the first prayers that we memorized. And odds are, we didn’t memorize it as an assignment in Sunday School, but rather we memorized it here, meaning in worship, as we recited it together, with the many generations surrounding us, each and every Sunday. Not all Christians do that though.

Some are even very much against the reciting of prayers in worship, claiming that prayers must only be done extemporaneously. I have a lot of respect for churches like that because they value authenticity, and there is certainly a lot to be said for that. However, since I grew up Lutheran, reciting the Lord’s Prayer is not only second nature to me, but I also know the value of reciting it each and every Sunday.

So when I saw that this reading from Matthew was coming up I thought to myself, oh, this one will be easy! It’s so familiar to most of us! I’ll just take it line by line and boom we’ll be done! Ha! As my dad always says, “Nothing can ever be easy.” Maybe you can guess the part of today’s reading that I’m talking about. Yeah, the ending. Jesus finishes teaching them how to pray and then just has to add, “If you forgive others their sins, your heavenly Father will also forgive you. But if you don’t forgive others, neither will your Father forgive your sins.” Jesus! What’d you have to go and say that for! Couldn’t you have just said “Amen” and been done with it? But no, you just gotta stir things up don’t you Jesus! Just can’t leave well enough alone!

Now, before we get into what Jesus meant by such tough words there are two side notes that I think we should cover, two tangential topics that came to my mind as I was thinking about this sermon that I don’t think we don’t talk enough about in the church. The first one is all the gendered language in today’s reading. The Bible translation that we use here is pretty good about using non-gendered language when the author is referring to anyone, not just men.

But sometimes, it’s just hard to escape, especially when the pronouns refer to God. In today’s reading God is referred to as Father no less than five times in our short eight verse reading. In my own personal, private spiritual life, the part that only occurs in my head, I don’t have a problem with this. But if Jesus has taught me anything, it’s that it ain’t all about me. I bring this to your attention for two reasons.

One, there are many in our society that have not had any positive male figures in their lives. For many people, maleness is automatically a negative. For some, maleness is downright evil, depending on how bad a person’s experiences were. So, by only using male pronouns for God, we are inadvertently putting some huge roadblocks in front of some people’s journey with God. And why do we continue to do that? Just to satisfy our own preferences, our own way of thinking that we really don’t want to change—because it’s comfortable for us. But again, if Jesus has taught us anything, it’s that it’s not all about us. And sometimes, we are called to sacrifice our own preferences as we care for a hurting world. Which is something we’re well practiced in! I see that in you all the time! And this is just another way of practicing that.

And the other reason I bring this to your attention is simply because only referring to God as a male is simply not good enough. It limits how big our thinking about God can be. Personally, I think God can be both genders. I think God can be no gender. And everything in between! Trying to place God in our human-sized labels like "male" is only doing a disservice to us and our ability to experience God for who God really is. I believe, with all my heart, that we can be much more imaginative about God, than a white old guy with a beard sitting in the clouds. Surely, God is more than that right, bigger than that, more comprehensive than that? The Bible is very creative with the way that God is described! And if the Bible can be, I think we can too.

The other side note is more of a heads up, or a downright warning really, and it has to do with Jesus’ tough words about forgiveness in this reading. I met with our Journey of Faith leaders recently, Journey of Faith is what our new member process is called here at Bethlehem, and we were going over some of the upcoming Sunday Bible readings that are coming our way over the next few months. And let me tell you, we are in for one heck of a ride! My goodness, if you think today’s reading is tough, wait till you hear what’s coming!

At one point the Journey of Faith leaders asked, “Can’t we just read something else pastor?” It’s tempting, let me tell you! But we won’t, and here’s why. Tough Bible passages are meant to be wrestled with. God invites the struggle. Because in that struggle we will learn more about God and each other. And is there any better, safer place to wrestle with the Bible, to wrestle with God for that matter, than right here? And if after the struggle you still don’t like what God has to say, it’s ok! God can take it!

Ok, now, about that God not forgiving you business. Jesus said, “If you don’t forgive others, neither will [God] forgive your sins.” What the heck Jesus! I thought you’d forgive us for anything! That’s not the Jesus we’ve come to know! We have this tendency, and I’ve talked about this before and will probably need to in the coming weeks, we have this tendency to make everything about salvation or damnation, to make everything either the best case scenario or the worst case scenario, leaving little room for anything in between. And I think that the church would be well served, if it had a bigger imagination than that.

Because the truth is, very little in the Bible is actually about going to a heaven in the clouds, or a hell below the earth, after we die! God has been spending most of God’s time, for thousands of years, on helping us figure out this life, in the here and now, that there hasn’t been much time left for anything else! That’s where Jesus comes in. Jesus enters the scene to remind us that, the next life, the afterlife, is already taken care of. Don’t worry about, especially because, nothing you can say or do will have any effect on it anyway, lest we fall into the belief that we can earn our way to heaven. Let’s focus on the here and now, Jesus says, where we can have an impact, and let’s leave the rest to God.

So with that in mind, what does Jesus mean when he says that God will not forgive our sins if we don’t forgive others? Well, it depends on what we believe about forgiveness. Now, I’ve preached on this before so if any of this sounds familiar that’s why, but it’s certainly worth revisiting. I mean, forgiveness is kind of a big deal to our faith right? And if you want a more in-depth refresher just ask me later and I can tell you where to find that sermon. But forgiveness is not a feeling, in the same way that love is not a feeling.

Forgiveness is an action, more precisely it’s a decision, a decision to move beyond something that’s getting in the way of a relationship, a decision to not allow whatever it is that’s getting in the way of that relationship to dictate, to have power over that relationship moving forward. It’s the decision to say, I may not be able to forget this, but this relationship is too important, and I’m going to decide to move past it. This will no longer define us. That is what true forgiveness is. It is not a feeling, it is not liking a person all of a sudden that has hurt you, it’s moving forward, it’s moving past it.

Let me give you an example of this from my own childhood when I learned this lesson. I shared this story in Bible study a couple months ago and I’d like to share it with you all now. So, I’m probably around ten years old. And I’m at a family get together at a relative’s house in my hometown of Vacaville. I was there with my parents and the uncle whom I was closest to was there as well, my Uncle Dennis. At some point in the evening’s festivities, my dad, said something that really hurt my Uncle Dennis’s feelings.

I had never seen these two argue before, they were like brothers up until my Uncle died last year. So to see them at odds was quite traumatic. To this day I don’t know what was said but my uncle and his wife, my Aunt Ann, angrily left and went back home to the Bay Area. We go home as well. It’s late. I’m about to go to bed. And there’s a knock at the door.

My ten-year-old nosy-self got up to see who was at the door at this hour, and I watched my dad open the door to see my uncle standing there. My uncle was at least six and a half feet tall, so there he was, this large than life being to me, standing at the door, with bloodshot eyes, clearly upset, and he looks my dad in the eye and says, “We need to talk.” I don’t know what happened after that, I wasn’t privy to their conversation they had that night. My dad probably told me to go ahead go to bed.

But what I do know is that after that night, they were ok. Whew! What an impression that left on me—to see someone that I looked up to, literally and figuratively, drive back from the Bay Area that night, to make things right with his brother in law—to see him put their relationship above any hurt feelings—to see him not be able to go to sleep that night until they were ok! What an impression that left on me. 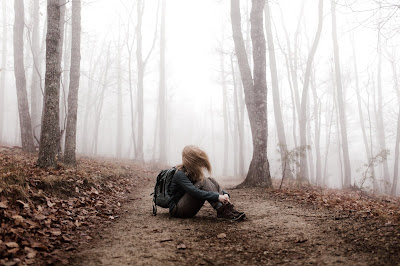 But God doesn’t want to be back there! God wants to move on, move ahead, move forward with us. And so God stays there, gently, and sometimes not so gently, urging us, pushing us, prodding us, to move past whatever is getting in the way of our relationships with others, and to forgive, remembering that forgiveness is not allowing it to define the relationship anymore, forgiveness is not allowing it to have power anymore. But God, who is ever faithful, will stay back there with us, as long as we’re back there. Thanks be to God. Amen.