Jesus is still on that same mountain—the same mountain that he has been on for three weeks now, at least to us. For the last three weeks, we have been reading what has come to be known as the Sermon on the Mount, which covers three whole chapters of the Gospel of Matthew. And today, we come to the end of it. The sermon has been chock full of many wise sayings, lessons, the Beatitudes, as well as some pretty tough teachings that are just as hard to hear today as I’m sure they were then. Today’s reading has hope and promise, as well as some harsh warnings from Jesus. This first sermon of Jesus’, which is sort of a springboard for the rest of his ministry, may leave us scratching our heads at times, and I’ll warn you again, that head scratching is not going to end today.

But in spite of that, there’s one thing that we can take away from it that’s certain: Jesus means business! I want you to hold on to that over the coming weeks because it will come in handy as we wrestle with some very tough passages from this Gospel, some very tough words from Jesus himself. Jesus could sense that his ministry on earth was not going to last long, he was making too many enemies too fast. And so, when he finally gets this opportunity to tell the world what God wants them to hear, he knows he’s only got so much time to do it.

And so, there are times when he might sound harsh, but I think it was just his all-business approach to his work that we are hearing. Don’t get me wrong, I’m not making any excuses for Jesus. Jesus can take care of himself. And to be honest, not even this helps me with some of Jesus’ harshest lessons. And that’s ok, we don’t have to agree or understand everything that Jesus said. That’s where grace comes in.

So, let’s tackle today’s reading. Jesus begins this third and final chapter of this sermon with a lesson about judging others. Taken at face value, we have what seems to be an unrealistic command, something that we just can’t humanly accomplish. Jesus said, “Don’t judge, so that you won’t be judged.” Is Jesus setting us up for failure here? By all means, raise your hand if you have mastered this so you can teach me! None of us can do this. We all judge! So does that mean we are all doomed?

Well, from everything else we know about Jesus, I think it’s safe to say that he did not mean that we are all doomed. So what does he mean? Whenever you come across a Bible passage that just doesn’t make sense, or just doesn’t seem right, that probably means that there’s a puzzle piece that you’re missing. Maybe it’s a translation issue, or something about the context that we don’t know, or the culture, or the original audience or any number of things. My advice in those instances, trust your instincts, and start asking questions.

In this case, it’s a translation issue. With all the translations out there, you’d think this would be a less common problem that it is by now but alas, even the newest translations fall short too often. In our reading today, the trouble is with the word “judge.” Now you might be thinking, how hard could it be to translate the word judge. Well, that same Greek word, kreno, is translated no less than 14 different ways in English! Judge, determine, condemn, sue, question, and regard, just to name a few. So, how do you determine which one to use? Well, context is key, but also cultural, literary, and social factors are involved. So, when scholars take all those factors into consideration, many have determined that simply using the word “judge” here is inadequate. It’s just not strong enough of a word.

Which makes sense because our initial problem with what Jesus says here is the fact that we know we all judge which made it sound like we were all doomed. Now many scholars think that a more accurate word would be "condemn," "do not condemn." One scholar in particular, Ben Witherington, takes it a step further to mean, do not unfairly condemn. I mean, I think if we just didn’t condemn people at all that’d be great! But what I think scholars like Witherington are doing here is reacting to the larger point that Jesus is making. It’s not just about judging, or condemning, but it’s about applying critiques, evaluations, suspicions on people that we won’t allow to be applied to us.

This is about making condemning judgments on people unfairly, uncharitably, especially when we are not willing for that to be done to us. That’s what Jesus is getting at here. This is something that we are all guilty of and it’s something that we really need to address, especially in light of the fact that we now have this awesome welcome statement, that we now have the responsibility to live into. So, I want to show you a video, the source of which is HBO, and there is one bad word, the s-word. Oh boy, the s-word in church, what’s the world coming to. I believe this video highlights a modern day example of what Jesus was trying to get at here. 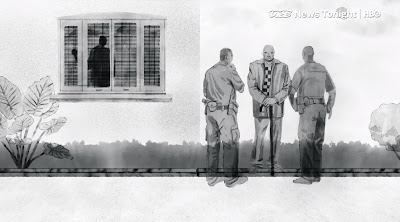 Do not condemn unfairly. And so you don’t think that I’m picking on white people, this was just one example of this in today’s world. As a straight male, I have to constantly keep myself in check whenever I encounter people from the LGBTQ community or women. I have to recognize that my straight maleness carries with it the stain of an abuse of power, power that I didn’t earn but was simply granted to me at birth, when I entered a world that has treated those other two groups unfairly, and that unfairness is built into the system.

Am I personally at fault for that? Not exactly, but do I carry the responsibility to change the system for the better? You better believe it, which is why Jesus takes it a step further! Jesus doesn’t stop at saying do not condemn. But he sums up his entire sermon, the entirety of scripture actually, by saying, “treat people in the same way that you want people to treat you; this is the Law and the Prophets.”

The Golden Rule, “treat people in the same way that you want people to treat you.” But in order to do that, it takes some intentionality. Intentionally asking yourself, “Is what I’m feeling or thinking about someone, in any way, influenced by prejudices that have been ingrained in me since birth? Is what I’m about to say or do, what I would say or do to anyone, or is it different because of our differences? But we have to constantly be asking ourselves these questions. We have to be ever vigilant about what goes on in our heads subconsciously. This doesn’t come naturally! What comes naturally is unfairly condemning people. That comes very easy to us. And Jesus knew that! Jesus knew that because Jesus was one of us!

There is so much pain and suffering in this world. Let’s not add to it senselessly. We have enough to address with things like hunger, and homelessness, and the sick and dying. Racism, homophobia, sexism, xenophobia, there’s just no need for such things. But make no mistake, you can be a good person, and still contribute to any of those isms unknowingly. The only way they will end is by keeping ourselves in constant check for such things, by learning all we can about them, by listening when given constructive criticism, and by heeding Christ’s call, to treat others the same way we’d want to be treated—remembering that it doesn’t come naturally, and that we are going to fail at it. Thankfully, we have a God who never gives up on us, nor condemns us unfairly. Thanks be to God. Amen.