The Zagging of Jesus

So, to recap the last few weeks from our time in the Gospel of Matthew so far, Jesus was born, was baptized as an adult, and was then tempted by the devil in the wilderness. That’s the story so far, minus only a few minor details like angels and magi. Now, having been baptized by John and tested by the devil, Jesus is ready to get to work! And what does the savior of the world, the master of the universe, the ruler of the cosmos do first? He asks for help of course!

Something you will notice about Jesus as he’s presented in these Gospel accounts is that every time you think he’s going zig, he zags. I mean, what in the world would Jesus need help with? He’s literally the king of kings! But yet, here he is, asking for help, calling his first followers, his posse, his squad. First he calls Peter and Andrew, then James and John. And there’s something quite mystical, even theatrical, about the way he calls them. 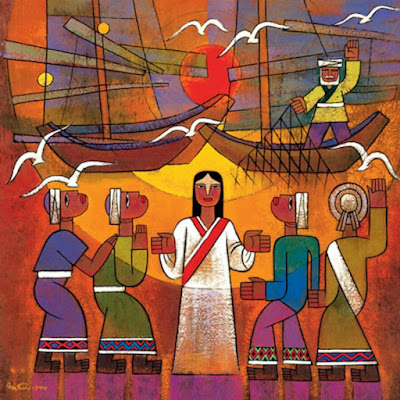 We find these four fishermen minding their own business, just going about their daily work, casting nets, mending nets, when out of the blue Jesus comes along and says “Come, follow me, and I’ll show you how to fish for people.” Now, if a religious leader you knew, came to your place of work, and said, come follow me and I’ll show you how to, I don’t know, build people instead of houses, or program people instead of software, or count people instead of money, you’d more than likely call security. But what do they do, they drop their nets, they drop everything, and go with Jesus. And you know, we may never really know why. What was it that made them make such a drastic life decision? We may not know why, but we do know what it was they dropped those nets for? And I wonder if it came as a bit of a shock to them.

It’s very likely, that they were assuming that they were joining up with a guy who was going to overthrow the government, lead a revolt against the Roman Empire; and what Jesus needed help with was starting a grassroots campaign to that end, and maybe even, help with forming an army. And you can’t fault them for assuming that. Life had been tough under Roman rule for quite some time, especially for the Jewish people in that region. And so, when a popular character like Jesus comes on to the scene saying things like, “Here comes the kingdom of heaven!”, we too would assume those things. It’s just the way our brains work. A modern day example of this would be assumptions made by many with Dr. Martin Luther King Jr., whose birthday we just celebrated this past week.

Dr. King led a peaceful, non-violent protest for civil rights but there were many that did not agree with him and thought that a more assertive tactic, even violent tactic, was necessary to further the cause. However, he didn’t budge on this. And believe it or not, even after his assassination at the hands of a sniper over 200 feet away, who was an escaped convict who still managed to buy a rifle and scope from a local sporting goods store, there are still people, to this day, who think Dr. King should have been more aggressive.

The NRA came under serious fire this past week when they tweeted that “Dr. King applied for a concealed carry permit…and was denied.” Meeting violence with violence, is just the way we are wired. And that may have worked fine when humans were living in caves but that sure as hell doesn’t work today. Dr. King knew that because Jesus knew that.

Which brings us back to Jesus zagging when everyone thought he was going to zig! What does that even look like? Where do we get that saying, zig zag? That’s gonna cost me an hour of my life online as I “research” that this week. Anywho, things did not play out the way that Peter, Andrew, James, and John may have expected. Jesus does not start a grassroots campaign to overthrow the government, nor does he begin building an army. Where does he go?

He goes to the sick and diseased. He goes to those in pain. He goes to the demon possessed. He goes to those with epilepsy. He goes to the paralyzed. In other words, the poor, the outcast, the uncared for, the forgotten. I’d bet you my firstborn child, that was not where Peter, Andrew, James, and John thought they were headed when they dropped those nets. They go from being called from the seashore, right into the depths of human pain and suffering. And that must have had a lasting impression on them.

It clearly had an impression on Jesus, because it was that place, the depths of human pain and suffering, that Jesus’ Sermon on the Mount came from, which began with what we now call the Beatitudes—blessed are the hopeless, the grieving, the humble; blessed are the hungry and thirsty, the merciful, the pure in heart; blessed are the peacemakers, the harassed, the insulted. Jesus comes out of experiencing the worst of human pain and suffering and delivers what just may be the most well-known sermon the world has ever heard.

But even this is yet another zag when they were expecting him to zig! Because preachers in Jesus’ day, not unlike many preachers today unfortunately, were telling people that it was their fault for the suffering that they endured, that it was probably their sinfulness, or their parent’s sinfulness, or because their faith wasn’t strong enough, or some other garbage.