Time—that elusive element to our existence. It is both a curse and a gift, and sometimes simultaneously both. One day we are lamenting the amount of time that has passed between this and that, and another day we are thankful for the passage of time. If I’m honest with myself, I think I tend to lament more than anything when it comes to time. There never seems to be enough hours in the day, there never seems to be enough quality family time, date nights, I watch my girls grow into women right before my eyes and wonder how well I’ve used that time. I’m sorry if that was a little depressing. I told you, I lament time more than I do rejoice in it. That probably has something to do with my personality type. But time is just something that you can never get back.

No matter how you personally regard the passage of time, I think it’s safe to say that time is on the minds of many of us at this time of year for a whole host of reasons: the days are shorter, holiday preparation has snuck up on us yet again, how many times have you heard someone say I can’t believe it’s Advent already! Where did the summer go? For many reasons, time just seems to get in a few extra jabs this time of year. And time seems to have been on the minds of our authors of today’s readings. Isaiah looks forward to a time of peace where war no longer exists. Paul says that it’s time to wake up, the night is almost over. And our passage from Matthew is a portion of Jesus having a private conversation with his disciples.

And apparently time was on Jesus’ mind that day too, only in a much more dramatic and scary way than Isaiah or Paul. Many a child have been freaked out by this passage. And before I go any further, let me just say that this passage is not about the Rapture, the belief that God is going to make a certain number of believers just vanish into thin air someday, like in the Left Behind book series. That is not a part of Lutheran theology, nor in most mainline Protestant churches, and it’s certainly not biblical. It makes for exciting fiction, but that’s all it is. But even aside from the Rapture, this passage is still quite eerie, even for us adults!

Jesus begins with a reference to Noah, when one group was saved and the rest of the world, while they are eating and drinking and being merry, are swept away by a flood and die. He continues with these disturbing images of two men in a field, and then one dies; and two women at a mill, and then one dies. And then he tops off all these scary images with a thief breaking into a home! Now, in all fairness to Jesus and his mood that he was in, this comes in the 24th chapter of Matthew, towards the end of this Gospel. In fact, when Jesus gets done talking with them, he gets arrested. So he knows what’s coming, and he knows it’s just around the corner. So, we’ll have to forgive him for the mood that he was in that day.

Because, in the midst of all this imagery, rapture debate, and moodiness, it’s easy to lose the whole point of Jesus words here. And Jesus’ point is twofold: time is of the essence, and I am coming back. Now, there is just as much diversity in thought over the second coming of Christ as there is over the Rapture. On one end of the spectrum some say that Christ will come back in physical form when every person on earth has been presented with the gospel. On the other end of the spectrum others say that the second coming has already happened, Christ has returned in you and me, the body of Christ on earth. That is what we’re always calling ourselves right? I think most Lutherans are somewhere in between that spectrum.

And what I’d really like to highlight about this is the “both/and” nature of our theology, the “now/not yet” nature of our theology. And this season of Advent plays on this beautifully. You may be wondering, why in the world are we even talking about the second coming of Christ? Aren’t we supposed to be preparing for Jesus’ birthday, the first coming of Christ? Well, that’s part of it, but it is about both. It is about the past, the future, and the present. Because as we hear all these scripture texts this season about how the world longed for, yearned for, God’s Christ to come and save them, we hear those texts in our own context, in our own longings for Christ, in our own yearnings for salvation to come to this world too.

Likewise, Advent reminds us that it is both us and Jesus that come into this world bearing the light of Christ, it is both now and then, both here and there, both in this world and the next. We will soon be hearing the cry of John the Baptist to prepare the way of the Lord—that in some mysterious way, we carry the responsibility and honor of ushering in the coming of Christ into this world, of preparing the way for Christ to work in this world, now, in the present. How do we do this? By following Christ’s lead, by doing all those things that he urged his followers to do. 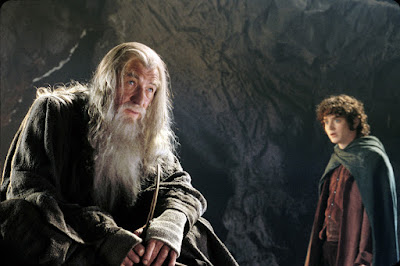 So, how will we decide what to do with the time that is given to us? Because time is of the essence, not because we are in danger—God’s love is unconditional and cannot be defeated—but because there’s a lot of work to do in the world, and we have the responsibility and honor of participating in the second coming of Christ. Thanks be to God. Amen.