God I love John the Baptist! One of the greatest characters in the Bible. With his standout wardrobe and his hipster diet, he’d fit right in on the west coast, well if it wasn’t for the animal fur that is. But I love him for far more than these things. I love his attitude. He did not let anything get in the way of his message, not the sideways glances that I’m sure he got, the judgement in people’s eyes, the outright threat of persecution from the religious leaders, the Pharisees, nothing got in his way, not even himself.

I used to think of him as this fearless, come what may kind of character but I’m not sure how realistic that is. He may very well have been fearful, he may very well have been terrified of what may come from his behavior and words. He may have woken up each day of his ministry and thought this may be his last day of freedom, or his last day on Earth. That’s probably a little more realistic.

And personally, I’d love to think of myself as a John the Baptist kind of guy. Lord knows, even though I grew up Lutheran, I have had many struggles fitting in to our very white denomination. And John the Baptist too, I’m sure, had trouble fitting in. But if truth be told, I would not have been John the Baptist, I probably wouldn’t have even liked the guy, I probably wouldn’t even have given him the time of day, or have even been in the desert to hear him speak. If truth be told, I would probably have more in common with the religious leaders, the Pharisees, who persecuted him. Which is why I think he holds such a special place in my heart, he almost has a superhero-like status for me. He represents so much about who I’d like to be, but sadly am not.

And why are we even talking about this strangely dressed, bug eating, religious fanatic in the desert calling people to change anyway? Aren’t we supposed to be getting ready for Christmas? Isn’t that what Advent is all about? Last week we talked about the second coming and now this? Well, yes, this. Advent certainly is about peace, hope, love, and all those Christmassy things. But it is also about refocusing, reprioritizing, reorienting, or as John the Baptist put it, and please forgive my language here, Advent is about changing our hearts and lives. I know that c-word is a foul word in churches, but like John the Baptist I’m not going to apologize.

Now, in most other Bible translations, you probably have heard John the Baptist calling people to repent, rather than change their hearts and lives. And here’s one of the many reasons why I like this translation so much. The word repent is a very churchy word right? Not only is it insider language, but it’s a word that needs unpacked when you use it, and even worse, it presupposes that everyone in the room has grown up in the church and knows all the insider language. And I can assure you that is not the case here at Bethlehem, and besides, how unwelcoming is that? So I do my best to refrain from using such words which is why I like “changing hearts and lives” better. It’s a little more wordy, not quite as catchy, but much more accurate.

Because that’s exactly what John the Baptist is calling us to in this story—to change our hearts and lives. And there’s that foulest of words again. We like to joke about how we don’t like change in the church but my God it is not a joking matter. Every complaint that a pastor receives, every snide remark about some new thing a pastor brings, whether it’s an idea or something more tangible, all the murmuring behind a pastor’s back that magically gets back to them eventually, it all has at its roots in fear and disgust of change.

And for the sake of our calling as the gathered body of Christ, we really have to try harder to get over that. This fear and disgust of change only leads to one thing, stagnation. Not death, no, churches and other organizations can exist for a long time, never changing, never moving, staying right where they are, it happens all the time. But I wouldn’t call that living, would you?

Which is why John the Baptist calls us to change our hearts and lives—so that we can experience new life, and bring new life into the world. It’s another baptismal call to death and resurrection, but as always, before resurrection can come, death must come first, which is just another way to say, change must come first. And boy to we humans resist that at every turn. We have become experts in how to resist change without even knowing it. I’ve been going to a chiropractor for some sever back pain recently and she was explaining to me why she can’t just adjust me once and then I’m cured. She said that my vertebrae have gotten used to being misaligned and are now fighting her to remain in that position of misalignment. And I thought, what an interesting image for our faith journeys.

So much about our human nature resists the things that God calls us to. Much about our existence is misaligned with the things that God calls us to: love, kindness, mercy, equality, justice, change. Which is why we come back here, week in and week out, to practice those things of God here so that we can live them out outside these four walls. It is why we take this journey each year which begins with the season of Advent—to be realigned with the ways of Christ. And to be fair, we resist it because it’s sometimes a painful process, an uncomfortable process, being a work in progress isn’t always fun. Where do you think all this negative imagery comes from in this passage: change, shouting, uncomfortable clothes, a diet of bugs, confession, snakes, angry judgement, chopping axes, and let’s not forget the fire! 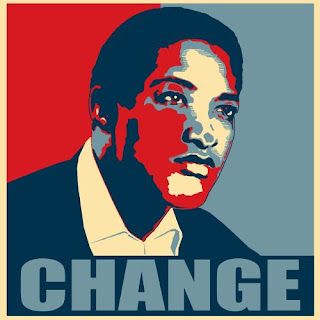 I’m reminded, thanks to parents who introduced me to a ton of music, of Sam Cooke’s song “A Change is Gonna Come.” Cooke wrote this song in 1964 in response to the racism that he experienced over a lifetime of living as a black man in America. Being turned away once again by a “whites only” motel in Louisiana, is what finally compelled him to sit and write this song. You can hear both his hope and his pain in these lyrics:

I was born by the river in a little tent
Oh and just like the river I've been running ev'r since
It's been a long time, a long time coming
But I know a change gonna come, oh yes it will

It's been too hard living, but I'm afraid to die
'Cause I don't know what's up there, beyond the sky
It's been a long, a long time coming
But I know a change gonna come, oh yes it will

I go to the movie and I go downtown
Somebody keep tellin' me don't hang around
It's been a long, a long time coming
But I know a change gonna come, oh yes it will

There have been times that I thought I couldn't last for long
But now I think I'm able to carry on
It's been a long, a long time coming
But I know a change is gonna come, oh yes it will

Sometimes the pain and discomfort of change that we are called to is in response to the pain and discomfort that many in our world are facing on a day to day basis, for oh so many reasons, that we cannot even begin to fathom because of our own privilege. May we, in the spirit of John the Baptist, be bold enough to respond to that baptismal calling, to die and rise each day, to change and live again each week, year in and year out, for the sake of a world in desperate need of change and new life. Amen.