"The God Who Saw Me"

Ron Valadez · "The God Who Saw Me"

Raise your hand if you’ve ever heard the story of Abraham and Sarah as abusive slave owners! Don’t be embarrassed by that! It’s not a story that gets read a whole lot. In fact, it isn’t found in the Revised Common Lectionary or the Narrative Lectionary! So, you’ve never heard it read on a Sunday morning before. At best, you may have heard it in a Bible study but even then, it’s a disturbing story to read, let alone study. Which is why I think this new lectionary that we begin today, will be fascinating and eye-opening for us! The simple question, Why don’t we hear the story of Abraham and Sarah as abusive slave owners read in worship, is enough to spark a fantastic conversation! But for now, let’s just stick to the story itself. First, a little background is in order.

Not long before our reading from Genesis, Abraham was given a promise. He was promised that a nation would grow from his family, that would be as numerous as the stars in the sky. This story is most notable by the fact that when Sarah, his wife, hears this, she laughs, denies it, but God insists that indeed, she laughed. That is the Sarah that we’ve come to know and love, the woman who laughs at God’s promise, and is able to have this playful exchange between the two of them. A very different Sarah than found in our first reading for today! Still childless, Abraham and Sarah wait for this promise to come true. They wait and they wait and they wait. Until finally, Sarah decides to put matters into their own hands and takes her African slave named Hagar, and gives her to Abraham to have a child with!

Now, every study Bible that I grew up with always had a note at this spot to let the reader know that this was indeed a common practice in that day. I don’t know if that was their way of sidestepping the gigantic elephant in the room, or if they were just in denial, but, I don’t care how common it was, this was a disturbing practice! Wrong is wrong, no matter the century! And make no mistake, this was not consensual! Hagar was a slave. This was no more consensual than when a slave is told to make dinner or harvest the grain. It’s no wonder the Church hasn’t had us read this on Sunday mornings! But wait, it gets worse! After Hagar gets pregnant, Sarah gets jealous of her, even though this was her idea! Criminy! We think our families have issues! But the hits don’t stop there!

Sarah goes to Abraham, who, by the way, is a spineless buffoon in this story, just going along with whatever Sarah says. She goes to him to deal with this slave of hers who thinks she’s better than her now just because she’s got his baby, according to Sarah. I swear this sounds like a trashy reality TV show, doesn’t it! Spineless Abraham says, she’s your slave, do with her what you want. So, Sarah beats her! Yeah, let that sink in for a bit. This was the last straw for Hagar who promptly ran away. And this is where our first reading picks up. God finds her out in the wilderness by a spring, heading in the direction of Africa, her homeland. Like her master Sarah, Hagar has her own profound interaction with the Almighty, but there is no laughter here.

After explaining to God why she was there and where she was going, God’s response is nothing short of alarming. God tells her, in no uncertain terms, “Return to your mistress, and subject yourself to her.” I’m guessing that was not the response that Hagar was expecting. But who knows what she was expecting, this wasn’t even her god, this was her cruel master’s God. For all we know she thought, so that’s where they get their cruelness from! And this is where it gets tricky. Because we all know that our God is not a cruel god, and yet, in this story God seems to do something that seems a bit heartless. And I think that needs to be named here, not sugar-coated, not explained away, not made excuses for, just named. Not for God’s sake, but for the sake of Hagar and her story she left behind for us.

As well as for the sake of everyone who has ever been asked to do something horrifically difficult for the greater good. Sometimes, it’s just enough that your plight is recognized, by someone, by anyone. I feel like we need to be a good friend to Hagar in this moment and just say, “Wow, that must have been really rough, that must have really stung.” I’m guessing many of you have experienced something similar. When you’ve gone through a terrible experience, and no one seems to recognize just how horrible it was? And I’m hoping you’ve also had the opposite of that, when someone not only recognizes it but acknowledges it with you. Doesn’t that feel like such a weight lifted from you? And I think most of the time we’re not looking for a pity party, we’re not looking to put a team together to get retribution.

Heck, we’re not even looking for help! Sometimes all we want is to be seen, for our current struggle to be seen for what it is. Someone to end all the second-guessing that we do with ourselves: Maybe I’m overreacting. Maybe it’s not that bad. Maybe I’m being too sensitive. Maybe I’m the problem. What a breath of fresh air to have someone say, “No, you’re not overreacting, that was horrible.” But back to our story because it doesn’t end on such a sour note, and we haven’t even talked about Mary yet! So, God doesn’t end there, God continues the conversation with a promise. God says that she also will be the mother of a nation. Her offspring will eventually be too numerous to count! And it will start with the baby boy growing in her belly, Ishmael. And that’s when something truly fascinating happens. 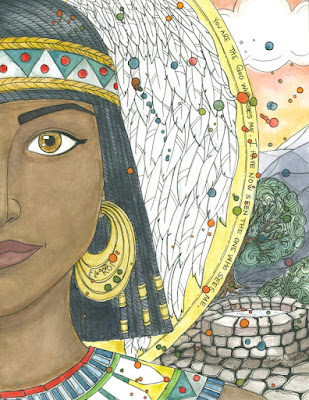 Hagar gives God a name! Not only that, she is the only person, in the entire Bible, to give God a name! Hagar, an enslaved, African, single mom, says to this god who appeared to her in her wilderness, “You are El-ro’I”, which means “God who saw me.” Lest we try to label her as only a lowly victim, Hagar proves to us that she is so much more. In spite of horrible circumstances, she is a force to be reckoned with. So much so, that when she meets God, she defines their relationship. And speaking of another powerful woman, Mary gets a promise of her own in our Gospel reading. The promise of all promises, and like Hagar, this promise comes to fruition through her future baby boy. Only this baby boy doesn’t end up being the father of a nation, he turns out to be the ruler of the entire cosmos!

And like Hagar, God comes to her not as a stranger, but as someone who knows her, who sees her, who has kept a caring eye on her, and her extended family, like Elizabeth, who has some amazing news of her own to share! And with the strength of Hagar, Mary says, “How can this be…?” As if to say, hold up a sec, run that by me again! How exactly is that gonna work? Mary needs a few more details before she agrees to anything! Unlike her ancestor Abraham, who just went along with whatever Sarah said. After getting a few more details of the plan, Mary of course, like her ancestor Hagar, acquiesced. And also like Hagar, it would mean a difficult road for her from here on out. God knows, parenthood is a hard road as it is! But their roads were fraught with so much more.

Not unlike most of our lives, if we’re honest. So, what name would you give God? As you look back on your life, and the experiences that God has walked with you through, and maybe even nudged you into, or shoved, sometimes it feels more like being shoved, how have those experiences shaped your relationship with God? And how might that be captured in a name? For Hagar it was El-ro’I, God who saw me. For Mary, it was Jesus, which means “God who saves.” This Advent, I encourage you to ponder what name you might give God. That is your homework.

And for extra credit, also ponder how your own name for God could be a breath of fresh air for someone else who has experienced something similar and might feel less lonely after hearing your name for God. As you engage in this work of naming God this Advent, may you be comforted by the God who Sees You, may you be strengthened by the God who saves, and may you be inspired by Hagar, the woman who named God, and Mary, the woman who birthed God. Thanks be to the God who has named us her Beloved Children. Amen.