This passage from Isaiah made me wonder, and please forgive me ladies if I’m overstepping here as a man because what do I know about childbirth, right? But this passage made me wonder if part of the reason why childbirth, is so difficult and painful, is to ensure that the mother is so invested in this child that she will do anything for it. Stay with me now, as I either enlighten you or dig myself into a hole I can’t get out of! Think of it this way, in any relationship, there is a threshold of when you can just leave and cut your losses, right? That point where the investment that you have put into this relationship is too high to give up now, and so you just keep putting in the work. In childbirth, the mother meets that threshold on day one!

From the moment she takes that first look into her baby's eyes, she thinks, “We’ve already been through hell and back together, there ain’t noth’n that’s gonna take me away from you now!” This is the beautiful analogy that the author of Isaiah uses to describe God’s devotion to us. It’s an analogy that we wouldn’t understand without our shared experience of childbirth, either as participants or supporters, and it’s a devotion that we wouldn’t understand without a willingness to see God with female attributes and experiences like the pain of childbirth, the struggle of carrying a baby for nine months as your body is contorted to fit the baby, and of course, the devotion between mother and child, that is simply a devotion like no other. I’m sorry but I really don’t think dads can even touch it.

However, believe it or not, this sermon is not about childbirth, or motherhood, or even parenthood. It’s more about, seeing God in all of God’s splendor, and exploring what gets in the way of us being able to not only do that for ourselves, but share it with others. So, here’s probably the biggest hurdle that keeps us from seeing God for who God really is, and that’s our bad habit of referring to God solely with male pronouns. For millennia, God has been seen as a man, specifically, a white, old, straight man at that. Now, is there anything inherently wrong with that? Absolutely not! What limits our view of God is when that’s our only image of God! Think of it this way, you know me, I’m a sci-fi geek so just bear with me.

If an alien sent you a private message. A message only to you, and wanted to know more about Earth but was too scared to come down and see for themselves. Their first question to you is, “What does a human look like?” What would you send them? A picture of a man? Well, that’s only part of the human experience, isn’t it? That would not provide the full story. So, how about a picture of a man and a woman? Hmmm, that’s still only part of the experience! Ok, how about a picture of a man, a woman, an infant, a toddler, a grade-schooler, a middle schooler, a high schooler, a middle-aged person, and an elderly person. How about now? Is that the complete picture of what humans look like? Of course not!

I’d bet my firstborn that the images going through your mind are mostly white people. And there’s nothing wrong with that, those are the images that our society has placed as our default. The challenge is to step outside your default position, and not stay there! So, back to our alien. Black and brown people would see those pictures and think, well, what about us? Aren’t we what humans look like too? Of course! So, you find black and brown versions of all those pictures, as well as East Asian and West Asian, and native peoples. Ok, surely we have enough pictures to show this alien what humans look like now, right? That’s when a transgendered and a non-binary person taps you on the should and says, “I don’t see us in any of those pictures.” Holy cow! 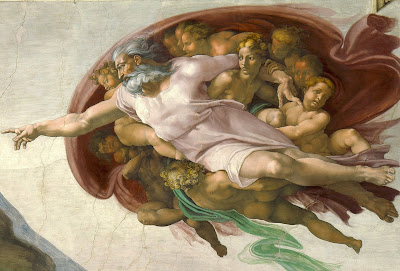 How many pictures would you have to send this alien! Do you see where I’m going with this? Just being human, is endlessly multifaceted, and there are endless combinations of what it means to be a human. Now, imagine that same question, about God. What if the alien asked, “What does your God look like? A hundred years ago, this is the image that would immediately have been sent. But as we just explored, this image, of a white, old, straight God doesn’t even begin to encapsulate who God is. So, what images, and language even, would we send that alien to show them who our God is? That sounds like an overwhelming assignment, doesn’t it! Where would you even begin? Well, let’s begin with scripture on this Majesty of Christ Sunday, and see just how majestic God is described there.

We already covered God as a woman in childbirth, so we would send them that lovely picture, but the Bible also imagines God as a midwife and a mother comforting her child. We would send them this one as well, the Bible is chock full of male images for God, like King, Lord, Groom, Husband, and Father. The Bible also describes God as human attributes, like breath, a face, ears, eyes, a finger, a hand, a mouth, a voice. So we’d have to send them all those images as well. And so far, these are just the human images and attributes that the Bible uses to describe God. And there are even more non-human descriptions! Let’s start with animals. In the Gospel of Matthew Jesus says, “How often I wanted to gather your people together, just as a hen gathers her chicks under her wings.”

So, we’d have to send those aliens a picture of a hen gathering her chicks. As well as a mama bear being robbed of her cubs, from Hosea. A dove from the Gospel of Mark. An eagle, from Deuteronomy. A lamb, from the Gospel of John. A leopard, from Hosea. Hosea must have liked wild forest animals. And let’s not forget a serpent, no not the one from Genesis, the one from Exodus that Moses lifted up, that John compared to Jesus. But the Bible doesn’t end there! It continues to imagine God as inanimate objects! So, we’d have to send those aliens pictures of: bread, a cornerstone, a cup, a drink, a fortress, a fountain, a gate, a hiding place, a horn, a lamp, a shield, a temple, a tower, a bush on fire, a cloud, a tree, dew, light, a morning star, like on our bulletin cover, rain, a root, the sun, a vine!

But wait, there’s more. The Bible includes things you can’t even see to describe God! So, we’d have to send those aliens descriptions of things like: silence, the way, the feeling of shade or quenched thirst, thunder, wind, as well as hope, strength, truth. All these and more are how the biblical authors imagined God. And yet, this became our default. Now, I’m not going to get into why that happened. For now, it only matters that it did, and more importantly, how willing are we to step outside that defaulted position. Not do away with it! No one is saying to discard this image. But what are we willing to add to it, in the same way that our biblical authors added to this?

Next week, we will be starting a new lectionary, a new one-year collection of assigned readings for Sunday. And this lectionary, not only comes with a selection of Bible passages to read, but the author, the Rev. Dr. Wilda Gafney, has also included her own translations of every passage. Why do I mention this, because she uses all kinds of descriptors and titles for God. Some are fascinating and unique like Sinai’s Fire, and Too Holy to be Pronounced. I love that one! Too Holy to be Pronounced! And you will also hear many feminine descriptors and titles for God like She Who Speaks Life, Mother of Mountains, and Womb of Creation. Some of these you will immediately fall in love with, and some will inevitably rub you the wrong way, or sound so unrelatable and foreign to you.

When that happens, don’t give up, stick with it, be brave! For that is often a signal that God wants to take you somewhere new. And even if that’s not the case, know that whatever descriptor or title that you don’t care for, is probably bringing new life to someone else in this room. And if that’s not enough for you to stick with it, I don’t know what to tell you. Truth is, our God is so big! So much bigger than this. So much bigger than any one image, or adjective, or title. Our God is so much more majestic than that, and we owe it to the world to show God for who God really is, in all of God’s glory. Thanks be to God! Amen.