I’ve had several names over the course of my lifetime. Not in the alias kind of way, I wasn’t running from the law or anything like that. But when I was very little, and I can’t believe I’m sharing this publicly, my sister and mom used to call me Tinkers. We don’t need to get into where that came from but luckily it didn’t stick for too long. Then when I was around four, my favorite uncle, Uncle Dennis, came up with a new name for me. Mostly because, not only was my name Ron, but my dad’s name was also Ron, and to top that off, my then brother-in-law’s name was, you guessed it, also Ron. So, rather than having three people answer when anyone said Ron, and I have a feeling my Uncle Dennis was trying to help me out by ditching that other name, he decided to start calling me JR, short for junior in Ron Jr.

And it worked! It stuck. Everyone from my childhood family still calls me JR to this day! Crisis averted. Well, that may be an exaggeration because it’s not really about the name, is it. Whether they called me Ron, or Ron Jr., or JR, or that other name, it’s less about the actual name and more about the relationship that each name represents. Though I may not care for the name that my mom and sister used to call me, I remember fondly the relationship that the name sprung from. Same with my given name, and the connection that it represents between my dad and I. And with JR, and the memories with Uncle Dennis that continue to serve me throughout my life, long after he left this world. And with the new names I’ve been given since, like Dad, and Pastor, and the many terms of endearment that my wife uses.

All the names for me, past, present, and future, are all beautifully wrapped up in so many wonderful relationships and memories. And speaking of names and relationships, our first reading continues with the theme of naming from last week. Only instead of God getting a name, it is Sarai that gets a name, as well as her future baby boy. Let’s start with Sarai though. In this story, Sarai is given the same blessing that Hagar and Abraham received, she would become a mother of nations, rulers would come from her womb, for generations to come! And to mark this promise, God gives her a new name, Sarah. Well, sort of. Here’s the interesting thing about this “new” name. It turns out to just be an alternate spelling of the same name. Its meaning does not change.

Sarai and Sarah both mean “princess.” A fact that my wife Sara likes to remind of occasionally. So, what’s the big deal then? Why the spelling change? If it’s the same name, what’s the point? Two things came to mind. First, we talk a lot about God’s transforming power in our lives, creating us into something new from our very core. What we might not talk enough about is that at the same time, God accepts us as we are, and no amount of transformation will cause God to love us any more than God already did at first sight. So, changing the spelling of her name, is a recognition of who she is, faults and all. And remember, just last week, she was portrayed as an abusive slave owner. So, these are not perfect people that God was dealing with here, neither Sarah nor Abraham! 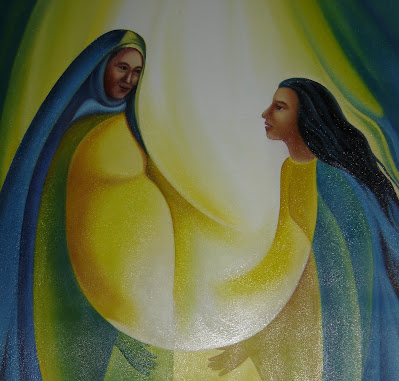 In fact, you could easily make the argument that God isn’t even dealing with “good” people here! But I think that’s the point, I think that’s what makes these stories so powerful, and these people so fascinating and relatable! The conclusion that the author wants us to come to is, if God can use them, as faulty as they were, God can use anybody, even us. And the other thing that came to mind was that though this spelling change didn’t represent a new person, as if Sarah was now this new and improved version of herself, it did represent a new relationship, with God—a relationship that would have a profound affect on this 90 year old mother to be. And just to make sure that they didn’t forget how far they’d come, God names her baby boy, Isaac—which means, laughter.  God’s way of saying, for the rest of your lives I’m gonna make sure you remember that you both laughed at me! Who says God doesn’t have a sense of humor! For generations to come, it would be a reminder to think twice before laughing at God’s promises. And speaking of God’s promises, the two women in our Gospel reading are overflowing with them! Like Sarah, Elizabeth is also having a baby in old age, and Mary is having one at a very young age, and out of wedlock at that, a very dangerous circumstance to find oneself in that day and age as a woman. And yet, both of these women carry within them two very special babies. Elizabeth’s baby turns out to be John the Baptizer, aka, John the Baptist, and Mary’s baby turns out to be the long-awaited messiah!

What struck me though about this part of the story was not their babies, it was the interaction between these two pillars of the faith. As amazing as their babies would turn out to be, their mothers were already pretty amazing! It’s no wonder that they turned out as good as they did with mothers like these. What struck me about their interaction was in both what was said and what was not said. They both come to each other with pure affirmation of each other, to lift up one another, in solidarity and support. What is not here is any sense of competition. And I know that might sound funny, but just think of their ancestors and all the competing they wasted their time on, even within the same family.

I mean, Mary would not be telling a lie if she said to Elizabeth, “Well, good for you, having a baby at your age! Look at you! All I have is the savior of the entire universe right here!” We laugh but we also know how human of a response that would be. But not from these two. Mary travels far to be with Elizabeth, and Elizabeth, she’s just tickled pink at the sound of Mary’s voice, so much so that the miracle child within her leaps for joy! You can’t tell who is honored more, to be in the other’s presence. And in a world where we’re expected to compete with everyone and everything, I just found that so profound and inspiring. If our first reading was all about relationships, then this Gospel reading shows us what they can look like. And for Mary and Elizabeth, it looks like affirmation, support, encouragement, care, love, and honor.

What our world could be like, if we could be more like Mary and Elizabeth in this moment between them. What our world could be like, if we were more affirming of others, supportive of others, encouraging, caring, loving, and honoring of the child of God found in everyone, especially those we’ve never met, those we’ll never meet. From the way we treat others, to how we greet others, is it Merry Christmas or Happy Holidays, to making the effort to use the correct pronoun. There are so many ways we can follow Mary and Elizabeth’s lead of lovingly affirming those around us.

I thought this sermon was going to end with me asking you, “What makes joy leap from within you?” But instead, I think the question before us is this, “How can you make joy leap from those around you, family, friend, or stranger? What can you do to affirm, support, encourage, care, love, and honor those that God puts in your path, so that pure joy leaps from within them? May the God of Elizabeth, Mary, and Sarah, go with you, as you find out. Thanks be to God. Amen.