Sermon inspired by Judges 13:2–7 and Luke 1:46–56 as found in The Women's Lectionary for the Whole Church

In our first reading, we have yet another Bible story that is not found in any other lectionary, and so, once again, you have never heard that story read in Sunday worship before; which is kind of odd because the baby boy that is spoken about is none other than Samson! Known for his superhuman strength, as well as his long hair, he’s one of the better-known Bible characters. Believe it or not, you can even find Samson action figures! And then of course there’s the bitter love story between him and Delilah. But the portion of the story we read doesn’t focus on him, he hasn’t even been born yet. No, it focuses on his mother. I don’t know if you’ve picked up on this yet, but Advent has been full of annunciation stories.

Unfortunately, she is in a long line of women in the Bible who were never given a name. Some of them played major roles, and some minor, not that it really matters. Cain’s wife? Nameless. Noah’s wife? Nameless. Queen of Sheba? Nameless. Job’s wife? Nameless. Peter’s wife and mother-in-law? Nameless. The woman healed by touching the hem of Jesus’ robe? Nameless. Jesus’ sisters? Nameless. The many other women standing in support of Jesus while he died on the cross. Nameless. And that’s just a small sampling of the well over a hundred women who go nameless in the Bible. And let’s be clear about this, they all of course had names, but these authors took it upon themselves to unname them. Yes, I know that’s not a real word, I just invented a new verb. 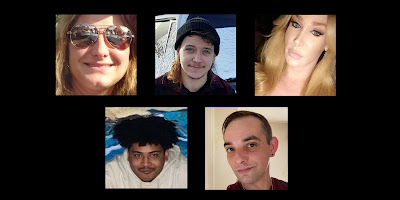 These biblical authors, that we call “inspired by God”, stripped these women of the first identifying marker given to them at birth. Disrespectful doesn’t even begin to describe that act. Because it’s not just a stripping of one’s identity, but of one’s dignity as well. I’ve seen two examples of this recently in the news. The first was after the mass shooting at Club Q, a gay nightclub in Colorado Springs. Police Chief Adrian Vasquez released the names of the five who were murdered, and when he did so, he not only was careful to use their correct names, because not all of them were using their names given at birth, but he also stated their correct pronouns. I had never heard that before, not from an official of any kind in a press conference, and certainly not from law enforcement. It was a profound moment.

Profound not just for the dead, but for their supportive family members they left behind who got to witness their loved one be named and seen for who they were. And profound for all our living LGBTQ+ siblings who yearn to be named and seen correctly. Police Chief Adrian Vasquez began by saying, “"We respect all of our community members including our LGBTQ community. Therefore, we will be identifying the victims by how they identified themselves and how their families have loved and identified them." After reading their names and pronouns, he said, “We strive to give the victims the dignity and respect that they deserve.” 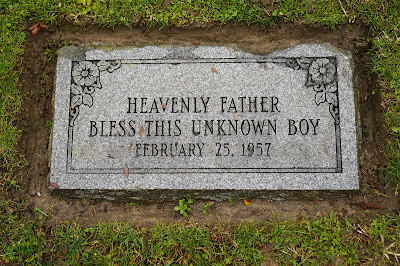 The other example of the importance of being named that I recently saw in the news came out of Philadelphia. There was a huge crack in a cold case from 1957 of a murdered four year old boy, only known as The Boy in the Box, as the technology of the day prevented them from identifying him, until now. New DNA tests finally came back with helpful results, allowing them to finally identify him, Joseph Augustus Zarelli. What really struck me about this, was that they had been working on this for 66 years, and never gave up! Not only that, but the entire city has not only heard of the Boy in the Box but actively memorializes him by leaving flowers on his grave on the date of his discovery, and toys at Christmas. He has remained in their hearts for so long, even though they’ve never met him!

Why? Philadelphia Police Commissioner Danielle Outlaw said this at the press conference, “When people think about the boy in the box, a profound sadness is felt, not just because a child was murdered, but because his entire identity and his rightful claim to own his existence was taken away.” Whew! I know, heavy stuff. Thank you for sticking with me. We’re not going to end on a sour note, trust me! Back to our Bible story. The mother of Samson gets this great news from this heavenly messenger that she’s going to have a baby, and she runs to tell the good news to her husband, who doesn’t believe her. Because, why would a messenger come to you and not me, he thought. And he doesn’t know what to do, even though she just told him the instructions that she was given.

So, he asks for the messenger to return, still not believing that this was really a messenger from God! God obliges, and the messenger returns, but not to him, to her. She runs to get her husband, and the messenger basically tells him, I’ve already told her what to do, just let her do it. Her husband burns an offering to God and in the fire the messenger ascends into the heavens right before their eyes. Her husband, still looking upward like a deer in headlights says, “Great, we’re dead.” I’m paraphrasing, but he was convinced that God was now going to kill them! And it takes his wife to calm him down and say, if God was going to kill us, why would God bother with any of this? Because she knew, that this was bigger than her, this was bigger than him, bigger than them.

She may not have known the details but her gut was telling her that this story they were a part of had a larger purpose. And was she right! Her baby boy grows up to save his people from both themselves and an outside threat, sacrificing himself along the way to do so. Hmmmm, foreshadowing the story of a future baby boy? I’d say so! Speaking of whom, in our Gospel reading, we have what’s known as the Magnificat, where today’s first and last hymns come from. It’s Mary’s response to her own annunciation, as well as Elizabeth’s. And like the nameless mother-to-be from our first reading, Mary and Elizabeth know that they are part of something much larger than them. They know that this is going to be a difficult road for both their sons and themselves as mothers of sons called to fight injustice in the world.

And Mary, speaks some of the most astonishing and insightful words ever recorded in scripture, which Luke put into verse and many have set to music for two thousand years now. These words are astonishing because they are not what you’d expect from the sweet, little, Mary that we’ve seen on TV. She begins by acknowledging her own blessedness to be a part of such a story of God’s, and that quickly turns into nothing short of a battle cry. Somehow, like her nameless ancestor from long ago, she has this insight into the bigger picture that’s going on, of the work that God is going to do through her and her baby boy. Somehow, she knows that he will be both salvation and destruction for so many people.

Not because of whether they believe in him or not, but because she has been given eyes to see the world for what it is, with all its beauty and with all its heartache, and she has every intention of giving those eyes to him to see the world through—eyes that can see both the goodness and evil in this world, eyes that can see who the privileged are, and who the nameless are, the forgotten, the unseen, the dismissed, the different, the unheard. Somehow, she knew that her little baby boy was either gonna mean salvation for those whose hearts were broken, and a whole lotta trouble for those who took advantage of them.

How was she so confident in that? Because she had the same God you and I do. A God who names us and sees us for who we are, calling us her very own children. A God who sees the nameless of our world and points us toward them. A God who sees the privileged of our world, and sometimes that’s us, and calls them to use their privilege for the greater good, for the bigger picture. For we have the privilege to be a part of a story so much greater than us, both as recipients, and as coworkers with Christ, bringing justice and dignity to a world who still needs it so badly. Thanks be to God. Amen.