One of the challenges with this new lectionary so far, has been keeping God as the central mover and shaker every Sunday. And I think that’s because all these women from these stories so far have been so fascinating and movers and shakers in their own right! They are all forces to be reckoned with, and I have to resist the urge to make them the core of the message. Thankfully, my seminary training has kept me in check, reminding me to keep scripture foundational, and God central, specifically Jesus. ‘Cuz let’s face it, we wouldn’t be here if it weren’t for the birth, life, death, and resurrection of Jesus of Nazareth. But these ladies from these stories, my goodness! They weren’t playing around! They meant business!

Which makes sense because anyone who comes from a disenfranchised group, has to work harder to be seen, to be heard, to get ahead in life, to exist. And so it was with just about every female character in the Bible. What has been fascinating for me, and I hope for you too, is the way these Biblical women have been paired with the Jesus narrative, the way their stories run alongside it, and thereby highlighting things I’ve never considered before. It’s been just as enlightening to find similarities in these stories, as it has been differences. And since we are keeping Christ central in all of this, what has happened is that each of these women have shown us a piece of God’s character. By getting to know them, we have gotten to know God, a little better each time.

So, before we dive into today’s stories, let’s do a quick recap of what they’ve revealed to us about God so far. We started in Genesis with the story of Hagar, Sarah’s African slave who after being abused by her, runs into the wilderness to escape, only to be found by God, revealing to us a God who not only sees us, but allows us to see her. And more than that, our God sees the invisible of our society. Hagar, shows us a God who sees. Sarah, Abraham’s wife, laughs at God’s promise of a baby at her old age. And instead of striking her down where she stood for laughing, God engages in a playful back and forth with her. Sarah, shows us a God who can take a jab and not get bent out of shape.

Mary and Elizabeth show what it looks like to affirm and support others, rather than compete with them. They show us a God whose ego isn’t bigger than her heart. And in her unnamed state, Samson’s mother shows us the importance of being named and seen for who we are. She shows us a God who upholds the dignity and respect of others. This brings us to today’s first reading, which is yet another Bible story that has never been assigned to be read in Sunday worship services. So, if you’re not that familiar with this one either, it’s not your fault. This is the story of Hannah, the mother of the prophet Samuel. Now, he should be way more familiar to many of you, we’ve read lot’s of stories about him over our lifetimes. 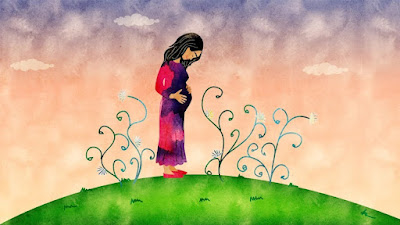 His mom Hannah, however, like many mothers, has had to be content working in the background, in the shadows of the men around her. I’d say this is the case with many parents, doing the things that good parents do and not getting much credit for it. And it’s not until you become a parent yourself, and you see the lengths that you would go to, to raise your children, to guide them, to protect them, to provide for them, that you realize, “Wait sec, is this what my parents did for me?” Odds are, yes, they did, but I say that knowing that not everyone has had the privilege of having loving parents. Hannah was though, but I got to admit, she has a unique way of expressing that love. The back story is basically another tale of a barren woman in a very abusive, dysfunctional family.

I know, how many times are we gonna hear a story like that, right! It’s almost like God is trying to tell us something, isn’t it? Anyway, Hannah, still childless, endured some pretty harsh treatment, both from her husband, and her husband’s other wife. When he would divvy out the food, he would give much less to her, then he would to his other wife, because he thought that God was keeping Hannah from conceiving. You have to remember that their progeny was closely tied to their identity both as humans and as religious adherents. Meaning, if you didn’t have kids, male or female, then two things were assured in their minds, you were incomplete and would be forgotten when you die, and that there must be a reason why God is keeping you childless.

Which was code for, you must have done something wrong to deserve that. Let me be clear, we do not believe such things today, well, some brands of Christianity do, but not here. Unfortunately, our Bible is chock full of not only characters that believed such things, but authors too. It’s a lot to wade through and sort out but that’s why you have geeky pastors like me to do it with you! So, not only was he withholding food from her, but his other wife, would emotionally abuse her constantly! She would mock her and laugh at her and make her feel worthless. She was merciless. The author states that Hannah would cry every time and not eat, and that this went on for years. Today we would call that depression and an eating disorder. You can’t tell me the Bible isn’t relatable to our modern ears.

Hannah’s husband then has the audacity to ask why she is so sad all the time! Like I said, a very dysfunctional family. So, Hannah goes to the temple to pray, still crying, only to be dismissed by the priest who assumes she was drunk. Yet another abusive man in her life, only this time it’s spiritual abuse. Then she makes this very unusual deal with God. She says, if you give me a son, I’ll give him back to you so that he can serve you his entire life. A very odd deal, especially from someone who wanted a baby so badly. It’s not like she had ten kids and didn’t mind losing one! She had none! A very odd deal indeed. But not as odd as following through with it! And that’s exactly what happens!

She does have a baby boy, and that’s where our reading picks up the story, and she gives him to the temple priest, the same one that accused her of being drunk, to be raised by him, and trained to serve in the temple for the rest of his life. Talk about commitment! I’ll have to remember this story the next time I preach on stewardship! Not only is she generous in giving to God but she gives off the top, her only son! Hmmmmm, now where have I heard about an only son before? Oh well, it’ll come back to me. In our Gospel reading, we have another story of God intervening on a woman’s behalf. Joseph, is about to divorce Mary, quietly, how kind of him, after finding out she was pregnant and he ain’t the baby’s daddy!

She was on the brink of living a hard life of alienation and poverty, as their society did not look kindly on that kind of behavior. But God, as she always does, advocates for Mary and appears to Joseph to tell him what’s up. And though we all know how that story ends, our first reading gives us a glimpse into another aspect of Mary’s motherhood. The fact that she too, had to give up her son in service to God. But unlike the prophet Samuel, his service cost him his very life. But I’d like to leave you with a bit of a twist to Hannah and Mary’s gift, because it’s not really that they were paying back to God what had been given to them. In reality, they were both paying it forward. And so, they show us a God who is selfless. We know that because of their songs.

This is the part where we ensure Jesus remains central to the message. Like Mary’s Magnificat from last Sunday, Hannah also prayed a song right afterward, which we also read together, and because of this song, the ancient rabbis considered Hannah a prophet as well. You may have noticed the similarity in both their songs. Each of them saw their baby boys as being part of a larger picture, and each of them saw their sons as coworkers with God, bringing justice and peace to their people. For Hannah and Samuel, their people were their fellow Jewish people. But Mary knew that Jesus was called to serve everyone, the entire world, past, present, and future.

Which is why the author Matthew gives him the title, Emmanuel, God with us. Because only God could claim you and I as their own, two thousand years beforehand. As we close out this final week of Advent, your homework is a two-parter. First, identify the many ways that God has blessed you, has answered your prayers, even if it wasn’t exactly what you imagined. And second, ponder how you can follow Hannah and Mary’s lead, by discovering ways that you too can pay it forward, for the sake of the world, with the bigger picture of God’s faithful love as your foundation. And as you do my friends, may a songful prayer of God’s wonders stir within your hearts as well. Thanks be to the one who is with us always, Jesus our Emmanuel. Amen.