We continue our four-week series on The Ten Words. Last week we learned that the Bible does not call them the Ten Commandments, but rather The Ten Words. We also learned that our Jewish siblings number them differently, making the First Word, “I am the Lord your God, who brought you out of Egypt, out of the house of slavery.” What I loved about that is that it starts us off on this Ten Words journey with relationship at it’s heart. So, we are going to continue with their numbering, because all ten of these words are going to have to do with a relationship of some kind. That will continue to be at the heart of this series. Now, some of you may be wondering what the arrow big arrow on the bulletin is all about.

I’ve said it a million times and I’ll say it a million more, God cannot love you more than God already does! Is this a present salvation issue? Hmmmmmm, maybe! Meaning, tending to our relationship with God might not affect how much God loves us but it certainly could affect how that relationship manifests itself in us, how that relationship bears fruit in us, how that relationship transforms us, molds us, into the children of God that we were born to be. Like any parent/child relationship, sometimes it doesn’t matter how good a parent is, if the child doesn’t at some point meet the parent halfway, doesn’t at some point begin to absorb what the parent tries to pass on, then there’s going to be a huge discrepancy between the parent’s hopes for their child, and what the child actually becomes. 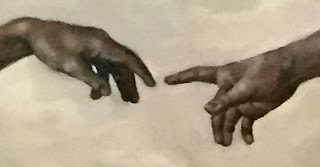 It’s used to intimidate people, keep people in line, keep people on a lower rung of society, and don’t get me started on how loyalty plays out in U.S. politics! But these are not the kinds of loyalty at play here in this Second Word. There are more positive, wholesome examples of loyalty out there, that are better suited to our relationship with God. Like, the loyalty between spouses, the loyalty between two friends, the loyalty of our dogs, the loyalty between siblings. My daughters have taught me a lot about loyalty. They may fight with each other and get on each other's nerves to no end but as soon as an outsider hurts them, all that is forgotten, and they're ready to go toe to toe to defend the other! It’s a pretty amazing and beautiful thing to see. And also quite terrifying.

But let’s keep moving. The Third Word is centered around God’s name. The translation I read said don’t use it “as if it were of no significance.” Many of you might have grown up with, do not use it “in vain.” And I think most of us grew up thinking this was about using foul language. Like saying “God damn” when you’re really not asking God to damn anything. Or saying “Jesus Christ” when you’re really not beginning a prayer. This, unfortunately, is not what this is about. That would be too easy. It has much less to do with our language and has way more to do with honor and respect. In the same way that we shouldn’t talk about someone behind their back, or be rude or racist or homophobic or sexist, all ways in which we dishonor and disrespect others.

However, I think we have to go just a bit deeper than that. Because this is about more than just showing God honor and respect, as if God’s feelings are going to be hurt if we don’t. This is about honoring and respecting and protecting God’s reputation, as we go about our daily lives in the presence of others. This is about how we represent God in the presence of others. I don’t have to tell you that church attendance is down, and this is not a Bethlehem problem but a global problem. It’s happening everywhere. Why? One response I hear often goes something like this, “The church just doesn’t mean that much to people anymore!” That’s such a copout. Because the number one reason that people don’t go to church like they used to, is because of the way that God has been misrepresented, by the church.

Which is a good segue to our final Word of the day, “Remember the Sabbath day and treat it as holy”, which is all about freedom. This final way of tending to our relationship with God is tending to our freedom. The question before us here is, “How will you use your freedom?” Remember the context. They had just been freed from slavery in Egypt, by God. Freedom was at the heart of their relationship with God. And now God asks, what are you gonna do with it? God has some ideas about that. The Fourth Word from Mt. Sinai goes on to say, “Do not do any work on it—not you, your children, your slaves, your animals, or the immigrant who is living with you.” Now, God does something a little sneaky here. God’s a sneaky one, God is! Two things happen here.

First, they take a rest, which causes them to acknowledge their freedom, the very fact that they can take a rest is due to the freedom given to them by God, and respond to it. But the other thing that happens here is this, they have to then give this same gift of rest to others, which causes them to acknowledge all those around them, people and animal alike, who don’t have the freedom that they enjoy, and respond to it. How brilliant is that!? I told you, God’s a sneaky one, God is! All this talk of freedom today is appropriate for another reason. Today is Juneteenth. For those of you who don’t know what that is, don’t be alarmed. I didn’t know what it was until seminary, but not until I took a class called Preaching in the Black Tradition, at a non-Lutheran seminary, with a black professor.

Juneteenth is the celebration of the announcement of General Order No. 3, of the Emancipation Proclamation, by Union Army General Gordon Granger to the enslaved people in Texas, on June 19, 1865. Now, you history buffs might be thinking, 1865? I thought the Emancipation Proclamation happened in 1863? And you’d be correct! January 1st to be exact. However, that’s how long it took for the Emancipation Proclamation to be enforced, and announced, to the far reaches of slavery in the United States. So there they were, these last remaining slaves, being told that they were free, and oh yeah, they had been made free two and half years ago. Can you imagine! And so, not January 1st, but June 19th, quickly became the day celebrated as the end of slavery in the United States by our black siblings.

But not becoming a federal holiday until 2021. Regardless, since that first Juneteenth, they have become a beacon, a model, for anyone brave enough to answer that question implied in The Fourth Word, “What are you gonna do with your freedom?” They continue to celebrate, yes, so that it will not be forgotten, but they also continue to work for freedom and equality, for the effects of slavery still linger to this day. So, The Second, Third, and Fourth Words that Moses received on Mt. Sinai compel us to tend to our relationship with God, and that looks like loyalty, respect, and freedom. And I can’t think of a better hymn to highlight those, than this next hymn, which has come to be known as the Black National Anthem. Written in 1900, by James Weldon Johnson, please stand as you are able and join me in singing Lift Every Voice and Sing!