The Author of Healthy Relationships: A Holy Trinity Sunday Sermon

There is a lot going on. In this Bible story. In our nation. In our world. In our synod. In our worship today on this Holy Trinity Sunday with the final rite for our Journey of Faith participants. There’s a lot going on in many of our families, maybe all of them! Whether good or bad, there’s just a lot going on right now, and I just feeel like it is helpful to name that. It’s a lot! And can seem a bit overwhelming. And your pastor thought it was a good idea to kick the summer off with a four-week series on the Ten Commandments! Because where else would we turn when life is kicking us while we’re down than a biblical list of rules and regulations?! I don’t know why Hallmark hasn’t figured this out yet! Can you imagine getting a “feel better soon” card and you open it up and all that’s inside are two stone tablets with the Ten Commandments on them?

We laugh but that’s kind of what happened on Mt. Sinai thousands of years ago when Moses went up that mountain to commune with God on behalf of God’s people, three months after they escaped Egyptian slavery. They had wandered around for a few months before stopping there and were already getting a bit restless, and that’s putting it mildly. It only took about three days for them to start complaining, and accusing Moses of leading them to their death. God provided for them along the way though, but in spite of that fact, they were still wandering the desert, months later, and therefore were still wondering if this was all worth it. And not only were they getting restless but issues of governance were also at play here. Even though they didn’t have a land to call home, someone needed to provide some governance when issues arose.

In a word, chaos is what they were experiencing, in their community, in their minds, and in their souls; and we all know that chaos can bring out the best in people, but also the absolute worst. As a people who have been in a pandemic for over two years, no one knows this better than us. And so, Moses goes up that mountain, probably hoping for some help. I imagine Moses thinking, “This was your idea God, you figure this mess out!” And so, what does God do? Gives them the Ten Commandments. But did you know, that this is not what the Bible calls them? Take note of this now, you can use this at your next cocktail party! Like anyone does that anymore. The Bible calls them, the Ten Words. Not the Ten Commandments, the Ten Words. I like that much better.

However, the church was always looking for a way to control people so they went with Commandments, it had just the right harsh tone to keep people in line with. Here’s one more bit of trivia for your cocktail party schmoozing, our Jewish siblings count them differently. Yeah, they number them differently. So, the first word for them, is the one we read today, “I am the Lord your God who brought you out of Egypt, out of the house of slavery.” We Christians have called this the prologue of the Ten Commandments. But for our Jewish siblings this was number one, the first word from God on Mount Sinai. And I think there’s a lot to be said for that, a lot of wisdom in naming this number one of the ten. And even more than wisdom, a whole lot of love and care.

Today is also Holy Trinity Sunday. I know that seemed like a random transition but bear with me, it’s not. This day is always the Sunday after Pentecost and for many pastors, one of the worst Sundays to have to preach on! Why the church would give a whole Sunday to one of the most difficult to understand, even harder to teach, having very little biblical support, convoluted doctrines, I’ll never know. But the one thing that I have appreciated about what seminary attempted to teach me about the Trinity is it’s focus on relationship. The relationship between the three aspects of the Trinity, traditionally known as the Father, Son, and Holy Ghost, is what I was taught to focus on and I continue to find that the most helpful way to approach the doctrine.

I love the way our next hymn uses the imagery of dance to play with the doctrine, even inviting us into the dance! The way that our creator, savior, and comforter interact with each other must be quite the dance indeed. Even now as I speak aloud of them, I fear I’m walking on shaky theological ground because it sounds like I’m talking about three beings, three Gods, when, of course, I’m not. One God, just in three distinct ways that they have revealed themselves to us. Or so they say. The reason why I bring up the Trinity is not just because of the day, but from the beginning of time, God has modeled for us, the kind of relationship that God strives for, with us and all of creation to the farthest stretches of the cosmos: the closeness, the love, the intimacy, the synchronicity, the dance, the rhythm, the harmony.

This is who God is, and this is what God is constantly working for, both with us, and for us to have with each other and all of creation. Relationship. Which is why this First Word is so important. Without it, the rest don’t make any sense. The rest would have no power without first hearing, “I am the Lord your God who brought you out of Egypt, out of the house of slavery.” It was God’s way of saying, we already have this history, this back and forth, you and I. We’ve already established this relationship, let’s not throw it away but see where it can go. Especially in light of the nine words that they are about to hear. Which, in all fairness, probably sounded a bit harsh to a people that were wandering homeless in the wilderness for quite some time already and would continue to do so for years to come.

If our council president came to me and said, “Pastor, you done screwed up. I think what you said or did was wrong and here’s why.” Now, my knee jerk reaction might be to ask, “Who do you think you are! Who are you to tell me that?” And though my tone may need some adjusting, that’s precisely the question I should be asking! Who is she to me? And it would be at that point that I’d have to stop, breath, sigh, and then close my mouth and listen because who she is, is not just our elected council president, but she someone who has, for six years now, shown me and my loved ones, nothing but love and care. And the same goes for all of our relationships, whether that be with our God, our family, friends, church, coworkers, all of them. The core of who we are is worked out in our relationships.

Some key questions here are: What are the relationships that bring you life and wholeness and freedom? And when they don’t, what do you do about it? When a relationship is strained, what are the foundations, the history, that you fall back on to make things right? As most of you know, synod assembly was a painful experience for me and many others, especially the people of color, women, and LGBTIQ+ community. There’s a lot of chatter online about whether or not the ELCA is a safe place for many of us anymore. It was so bad, it made me physically ill, I thought I was coming down with something: headache, body aches, upset stomach. I was this close to calling Pastor Al and saying I just can’t do it. I even took a COVID test but everything was coming up negative, I didn’t even have a temperature.

So, I sat down to write my sermon and thought how am I going to do this! And then an image came into my mind, and that image was this. Gathering with you here, to try and figure out this thing we call life and faith, in the midst of so much chaos. And I was overcome with a sense of peace at the thought of being here with you the next morning. After experiencing some of the worst that Christians have to offer at synod assembly, I would have been justified to never want to step into another church again. But it was this, this relationship that you and I have formed, a relationship that brings life and wholeness and freedom to me, that brought me back. And as some of you know, after the experience I had in my first call, that means a lot. 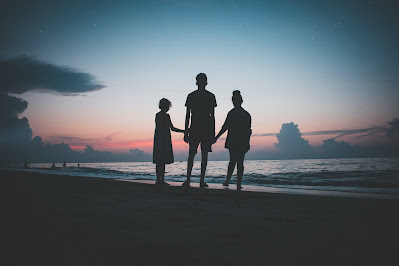 As we dive into the rest of the Ten Comma…, the Ten Words this month, I encourage you to consider the source, the God of life, and wholeness, and freedom. And as you do, I will keep you all in my prayers as you tend to all the other relationships in your lives. May the ones that fill you with life and wholeness and freedom, assist you with the ones that don’t, through the power of the Holy Trinity, the author of healthy relationships. Thanks be to God. Amen.
Email ThisBlogThis!Share to TwitterShare to FacebookShare to Pinterest
Labels: chaos, commandments, consider, exodus, freedom, god, holy, life, love, relationships, sermon, source, ten, trinity, wholeness, words