This is one of those stories that kinda gets buried in the Revised Common Lectionary, that’s the standard place that many churches get their Sunday readings from, except for churches that have pastors like me who want to try different things, like the Narrative Lectionary that we use. And so, this story rarely, if ever, gets preached on. And this time, I kind of see why. It’s a weird story, with some highly questionable ethics at play here. When I first started preparing for this sermon, I thought to myself, what in the world am I gonna do with this story!? And maybe it’s because I don’t really like this story! I know, shameful, right! What kind of a pastor doesn’t like a Bible story? Not only is this story weird, not only does it contain some disturbing Christian ethics, but what does it even have to teach us?

That if you’re as holy as Paul then Jesus will break you out of jail? Try telling that to the black men of the U.S. who are five times more likely to be incarcerated than white men, but let’s not get off track. Tradition has elevated Paul to near Jesus-like status over the centuries. He is given credit for much of our theology, as well as for growing this new religion by preaching and planting new churches across the then known world. And to his credit, I think he’d be mortified by the pedestal that we’ve put him on. And this story that we have before us today, is yet another example of why we should not. The story begins with a scene that sets up the main story, which is Paul’s imprisonment. There was a woman, unnamed of course, who was a slave but not just any slave, this slave had the unique ability to tell the future.

Her owners exploited that gift to make a lot of money. She had been following Paul around, proclaiming that he was a servant of the most high God and that he was offering a way of salvation for them. None of which was a lie, right! However, she was really getting on Paul’s nerves and so he takes her gift from her. Like a televangelist he says, in the name of Jesus I cast you out of her! Scholars have debated for centuries about why Paul did this. What got under his skin so badly? And though they’ve come up with lots of reasons why, I really wasn’t interested in any of them. I am more interested in what he did next, or should I say, what he does not do. Because the ramifications of this are tremendous.

And I don’t mean for his work, but for her life. Because now she was worthless to her owners. As if a slave could be knocked down a peg, somehow Paul has done just that for her. A slave is worth what they can do and she could no longer do what made them all that money. So now what was she to do? Notice there is no follow-up to her story. She is used here simply as a prop for the rest of the story. Does she become a Christian? I really don’t think so. I think their egos would have mentioned that if she did. There’s lots of possibilities but none of them are any good. She either died of starvation or was sold into sex slavery. There just weren’t many options for her. And for what? What good did this do and for whom? All because Paul was a little annoyed? Let’s keep moving through the story.

So, as anyone could guess, the owners of that slave woman are majorly po’d! They drag Paul and Silas into the town square and accuse them of disturbing the peace. And without a trial, they get beat and thrown into prison. Now here is where you're tempted to say, oh, poor Paul and Silas, look at how they suffer for the cause. Ok, I’m not going to tell you you’re wrong to feel that, but just hold on a second before you go there. Next comes this dramatic scene with an earthquake breaking open their cells. The jailor, fearing for his life at the thought of losing his prisoners, is about to fall on his own sword, when Paul stops him, letting him know they are still there. Very odd that they didn’t escape, but we’ll get to that in a sec.

Thankful, the jailor takes them into his own house, which leads to his baptism, but the story doesn’t end there. The next morning the jailor gets orders to release them but instead of them just leaving and going about their business, Paul just can’t leave well enough alone. Last week we talked about just how much privilege Paul enjoyed, well-to-do family, highly educated, Jewish elite, Roman citizen, a man, dripping with privilege, and here we get to see that on full display. And it ain't very pretty. He tells them, no! I’m not leaving. I’m a Roman citizen and have just been unjustly punished and incarcerated. So I’m staying right here and if they want me gone, the authorities can come and escort me out personally! My apologies to all named Karen but he goes full-blown Karen on them! If you don’t get that joke, it’s ok, it’s probably not worth getting anyway. 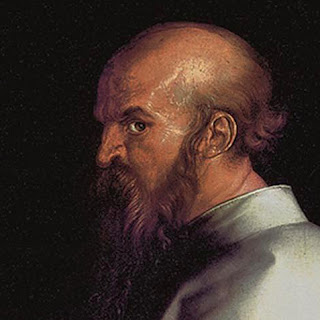 So, what do all these scenes tell us about Paul? They tell us that Paul is still the same jerk he’s always been! The same jerk that he was way back when he first met Jesus. And having read all of Paul’s letters, I think he’d be the first one to tell you that. I love that about this story. On Wednesday night, the last question I asked our Bible discussion group was, “Why did Jesus choose someone as horrible as Paul?” And without missing a beat, Denise hits the nail on the head and says, “It gives hope for the rest of us.” This is yet another example of how Jesus doesn’t need you to be perfect, or holy, or righteous, or always on your best behavior, or whatever you wanna call it, in order for Jesus to follow you wherever life takes you, in order for you to have a working, healthy, robust relationship with Jesus.

Now, I’d like to end by sharing, oddly enough, my favorite part of this story, which I think exemplifies this so well! If we rewind to the part when they are in prison. The author states that at midnight, just before the earthquake happened, Paul was praying and singing. And you might be thinking, well of course he was praying and singing, he was Paul, as you look up at him on that pedestal. No, forget the pedestal. This was Paul, the jerk, who used his privilege whenever it suited him, used his privilege to humiliate others out of spite, who didn’t use his privilege to help the lowly of society like that slave woman whose life and livelihood he demolished because he was in a bad mood that day, that is the Paul that is praying and singing!

That is the Paul that the author wants you to see, because the author knows that you too will find yourselves at your own midnight hours, when you are at your lowest of lows, when the world seems to be against you, when you know that some of your plight is your own fault, when you don’t feel worthy of anyone’s help, let alone God’s, when you sit in one of the many prison cells that this life has to offer, some of them self-made, rethinking your life, your decisions. It is precisely at your midnight hour that the author wants you to remember Paul, the jerk, who, in spite of everything, knew that Jesus is always willing to hear his heart’s pleas, in the form of prayers that sounded like songs and songs that sounded like prayers, even in a cold dark prison cell. I’d like to leave you now with a well-known poem called "Sympathy" written in 1899 by Paul Laurence Dunbar.

I know why the caged bird beats his wing
Till its blood is red on the cruel bars;
For he must fly back to his perch and cling
When he fain would be on the bough a-swing;
And a pain still throbs in the old, old scars
And they pulse again with a keener sting –
I know why he beats his wing!