The last two weeks we read from the book of Acts, and last week’s story occurred in, Philippi. This was one of the first places that Paul started a church. And if you were here last Sunday, you know that he didn’t have a good experience there. He got annoyed by a fortune-telling woman and took her gift away only to be arrested, beaten, and thrown into jail. An earthquake led to their freedom but not before he humiliated the local authorities with his Roman citizenship. It was quite the story and truth be told, Paul was not on his best behavior. If you know anything about Paul, his head must have been the size of a watermelon because he had a ginormous ego! At Wednesday’s Bible discussion, some other words they used to describe Paul were bold and confident.

He was certainly those things and those words are probably kinder words to use than jerk, which is what I called him last Sunday. However, in spite of the fact that he has gone down in history as being one of the greatest defenders of our faith, he simply wasn’t known for having a sweet personality. On the contrary, he could be harsh, abrasive, selfish, inconsiderate, rude, downright cold with his words, and he’d be the first one to tell you that. He’d also tell you that his deficiencies, just made Jesus look all the better, all the more gracious, so I guess in his eyes it all balanced out. Oh Paul, gotta love him. So, why do I bring this up two weeks in a row? It’s not just cuz I enjoy having a Paul bashing party! But because it’s connected to today’s reading.

The last two weeks we got to see the young Paul in action, in all his ego’s glory. However, this letter to that same church in Philippi, comes at the end of his ministry. Scholars believe this to be one of, if not the last, letter he wrote before his death, probably at the hands of the Roman government. And it’s in fact in one of their prisons that he wrote this letter. All that is to say that this was an older, wiser, Paul, and I’d argue, it’s a Paul that has had some of his rough edges smoothed out; dare I say, a more compassionate Paul. And what caused this softer, less hardheaded side of Paul? Well, many things I’m sure. For one, just living life can do that to many of us. I’m so glad you didn’t know me 25 years ago! I resembled Saul more than I did Paul back then!

The experiences that we go through, the heartaches, the celebrations, the pain, the joys, the losses, the gains, it all changes us, for good or ill, but I think for most of us, it all makes us better humans, and hopefully, better followers of Christ—more compassionate, more understanding, more flexible, more loving children of God. Most of us. Could that be the Paul that we get in this letter? I think so and here’s why. We’re actually gonna start at the end of the passage I just read.

He ends this passage by writing, “Some certainly preach Christ with jealous and competitive motives, but others preach with good motives. They are motivated by love, because they know that I’m put here to give a defense of the gospel; the others preach Christ because of their selfish ambition. They are insincere, hoping to cause me more pain while I’m in prison. What do I think about this? Just this: since Christ is proclaimed in every possible way, whether from dishonest or true motives, I’m glad and I’ll continue to be glad.” Hold the phone, that is not the Paul we knew last week. That is not Paul, the Jerk. This is a new improved, wiser, more loving, more flexible, Paul than we have ever seen before! Last week, he took the fortune telling ability away from someone, who, by the way, was only spreading truths.

She was only telling people that he had come in the name of God to give a way of salvation, and yet, he took her gift because he was annoyed by her, according to the author of last week’s story. Wow, how we have grown, Paul. It happens to the best of us. It happens to the worst of us. Whether we like it or not we find ourselves on a journey, a path, always moving, never static, or at least that’s the plan. And on that journey we grow, we change, and hopefully, we soften a bit. Just take a look at our church, there was a time, not that long ago really, some of you are old enough to remember, when women couldn’t be pastors. Even here at Bethlehem! Gasp! I know, hard to believe, right!

There was a time when victims of suicide couldn’t be buried in many church cemeteries. There was a time when changing a church’s worship from the congregation’s native language to English, was a church-splitting decision! Heck, changing the color of the carpet has been known to do the same thing! Most recently, there was a time when gay people could not become pastors, let alone a transgendered person becoming bishop! I know, hard to believe that was in the recent past of this rainbow banner flying congregation who just yesterday attended Placer county’s first annual pride celebration! How we have grown over the years. How we have matured. Because I think that’s a significant factor in growth, isn’t it? Maturing? I mean, we all grow but we don’t all mature, right!

As silly as some of those sound, these are all things that our immature selves have allowed to get in the way of our sharing of God’s love with people over the centuries, and some of them, not that long ago. I don’t know about you but sometimes I think, why did we care so much about that! And then I remember, oh yeah, human sinfulness. Or as our president Debbie often reminds me, “Because people suck.” Oh yeah, I keep forgetting that! Let me end now at the beginning of our passage. Paul calls us partners in ministry, and partakers of God’s grace with him. Oh, I love that line! I can handle this version of Paul any day! Partakers of God’s grace with him. If we are going to be partners, not only with each other but with people outside these four walls, then we have to make that our starting point. 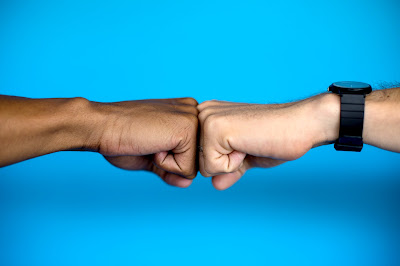 That we are just as in need of grace as anyone else, anyone else. And of all people, it’s Paul, the gentler, kinder, and lo and behold, humbler Paul, that reminds us of this. And speaking of great lines, the first and last verse of our next hymn ends with, “Above all, before all, let love be your raiment that binds into one every dissonant part.” Dissonance is often a musical term but what an appropriate term to use for following Jesus, isn’t it? What if we approached our ministry as a weeding out of as much dissonance as possible between us and God, between us and each other, and between us and the rest of the world. Thereby seeing partners in everyone, not just with Jesus, not just with the new and improved Paul, not just with each other, but seeing partners in everyone, no matter their own faith, or religion, or status, or color, or sex, or gender, or anything! Partners. Period. Amen? Amen.
Email ThisBlogThis!Share to TwitterShare to FacebookShare to Pinterest
Labels: compassion, dissonance, inclusion, journey, lgbtq+, life, love, ministry, older, partners, paul, Philippi, philippians, sermon, sin, wiser