Now we are officially done with the Gospel of John and are moving on to a couple weeks in the book of Acts. After which we will end this program year in the letter to the Philippians. The book of Acts is an interesting little book. It follows the four Gospels and gives us a glimpse into the life of the new baby religion we now know as Christianity. Like any startup company or organization, it was a bumpy ride at the beginning. And truth be told, the road never really has smoothed out for us since. It’s just the nature of our calling. Being called to follow Christ guarantees a bumpy ride because so many of Christ’s teachings go against our grain as the human animals we are. And this story from Acts that we have before us today gives us an interesting perspective into that. So let’s take a closer look.

It centers on a man named Saul, whom the church eventually comes to know as Paul. This is his second appearance. He appeared earlier in Acts as a young man who held the coats of those who were participating in the lynching of Stephen, an early follower of Jesus. So, right out of the gate this guy was bad news, and of course, he was, right, if he was raised around people, religious extremists, who thought it was ok to murder people who thought differently in the name of their god. It’s not rocket science, is it! So, what happens when Saul comes into some power of his own, he follows right in those religious extremists’ footsteps and starts killing what he probably thought were religious cultists who were destroying his religion! That would be us Christians! It’s amazing how eerily current these old stories are.

Saul had an interesting background. He was Jewish by birth. Came from a well-to-do family. He was well educated. He was from Tarsus, which was known for its university since the days of Alexander the Great some three hundred years prior. He was either a Pharisee, which was a religious leader of a particular branch of Judaism, or at least someone high ranking in that organization. However, he also had the curious distinction of being a Roman citizen by birth as well. Something that was very hard to come by for a non-Roman. So, all that is to say, this guy was dripping with privilege! The average person would have done anything to have just one of those privileges that I just listed. He had them all. And what did he do with them?

He participated in the systematic, government-approved, persecution of a group of people who he believed had strayed from their religion, and to be frank, were growing in number to the point that they were becoming the competition. Jesus takes one look at this bigoted, murderous, persecutor, and in true Jesus fashion, doesn’t see a lost soul, Jesus sees potential! As if Jesus said, I’ve been looking for someone with qualifications like you, and I’ve got just the job for you! You’re gonna be our first missionary to the rest of the world, Saul! Well, I’m slightly paraphrasing. Saul was on his way to Damascus to continue persecuting the church wherever he could find them, and on the way, Jesus appears to him in a blinding light. Now, let me just pause the story there for a second and make a connection to the Gospel of John that we just finished reading.

It's hard to not take what we just learned from John into this story. Do you remember when Jesus referred to himself as a shepherd, the great shepherd of the sheep, a shepherd who would protect the sheep at all costs, protect them from the wolves who would try to sneak in? And then, at the end of the Gospel of John, at his arrest, Jesus steps in front of his disciples, his sheep, in between them and the police there to arrest him, in protection, and gives himself up, exemplifying his status as the great shepherd of the sheep. I can’t help but see that Jesus in this story, again, as the great shepherd, stepping in front of a wolf on his way to harm Jesus’ sheep. Saying, ah, ah, ah, not this time. Only instead of killing or scaring off this wolf, like a typical shepherd would do, Jesus turns him into a sheep! You gotta love these plot twists!

Jesus asks him, “Saul, Saul, why are you harassing me?” Saul asks, “Who are you?” Jesus says, “I am Jesus, the one whom you are harassing!” And again, we have to pause here and take in another profound moment. Did you notice Jesus said, “me”? “Why are you harassing me?” Saul wasn’t harassing him! Saul was harassing Jesus’ followers. Saul was probably thinking, “Harassing you? I don’t even know who you are!” Here is another place we have to apply what we’ve learned from John. In the Gospel of John, salvation was all about relationship. That’s the lens through which Jesus saw salvation. Relationship with Jesus, the Word made flesh. That’s how important relationship was. That’s how close Jesus related to his followers. So close, you can’t tell where one ends and the other begins.

Being one with Christ meant that what you do to us, you do to Christ. On top of that, at the end of the Gospel of John, which we read last week, we got the threefold, “Feed my sheep…take care of my lambs…feed my sheep.” Meaning, it was now our turn to be Jesus for the world. Again, whatever you do to them, you do to me, Jesus says, and what you’ve been doing, Saul, just ain’t gonna do. So, Jesus sends him, now blind, to a follower by the name of Ananias in Damascus, and Saul’s assistants help him get there. Meanwhile, Jesus appears to Ananias and gives him a heads up that Paul is on his way. Ananias says, “Come again, Jesus? Saul, the murderous, bigoted, persecutor of the church? You want me to help him? You sure you got the right guy?”

I love the back and forth these two have, highlighting just how close their relationship is, and modeling just how close our relationship with Christ can be. To Christ’s credit, Christ doesn’t get angry, but does give an assertive, “Go! This man is the agent I have chosen to carry my name before Gentiles, kings, and Israelites. I will show him how much he must suffer for the sake of my name.” Which, on the surface, kinda sounds harsh, I know, as if Jesus is gonna punish Saul for his past behavior. However, I kinda find it a bit humorous. Because what actually happens is Jesus is just gonna give him a lot of work to do! Here he sounds all tough, like, I’ll teach him to persecute my people, and Jesus’ idea of punishment is just to give him a ton of work to do! But back to the story. 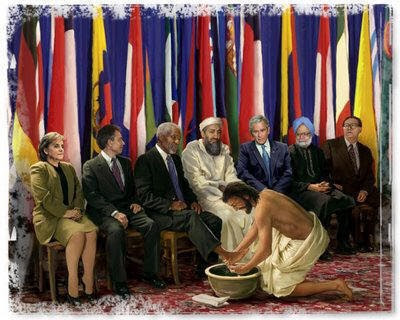 I want you to put yourselves in the shoes of Ananias, as he is walking to the house that Saul is staying in, to help this known bigoted, murderous, persecutor of the church. What must have been going through his mind? Well, Jesus has really lost it this time! Or, what did I do to get this job? Or, am I walking to my death? Imagine the emotions he must have been going through: fear, anger, disappointment in Jesus, despair for this Jesus movement that he’s trying to protect. Imagine the transformation that has to take place inside Ananias during this long walk toward Saul. He was about to be face to face with the Osama bin Laden of his day, to help him! He finally gets there, opens the door, and this is where another profound moment happens.

Ananias walks up to Saul, lays his hands on him, in the same way a pastor lays hands on new members joining the church, or a newly baptized baby, and calls him, “Brother.” Calls him brother. Wow! How do we even begin to process this! How in the world did he get from, have you lost your mind, Jesus!, to calling Saul brother? Well, maybe it’s just because I’ve still got John on the brain but I really think we’ve got to circle back to what John has taught us these past few months. It all boils down to relationship. If salvation is all about relationship, how we relate to God and others, then Ananias may have thought, “Well, I’ve got to start somewhere, and the only place I can think of starting with this guy is that, no matter our differences, we both call the same God Father, in their vernacular, and that makes us siblings.”

If there was going to be a salvific moment for either of them, it was going to be through relationship. It was going to take both of them to rethink how they related to each other and their God. Can you imagine a world where we engaged with people from that starting point, especially those we disagree with, especially those whom we fear, those whom we feel have our worst interests at heart, those who we see as the enemy? Can you just imagine that? Jesus could. Which is why a call to follow Christ guarantees a bumpy ride, guarantees a whole lot of work, is guaranteed to go against our grain. Thankfully for us, when our shepherd Jesus takes one look at us, Jesus doesn’t see a lost soul, Jesus sees potential, Jesus sees the future of the church. Thanks be to God. Amen.