Welcome to Holy Week. These readings just seem to be getting heavier and heavier, don’t they. This year’s readings are making me reconsider whether Lent is my favorite season or not! Today is Palm Sunday, but in some churches, it’s known as Passion Sunday, coming from an old definition of the word passion meaning suffering. And in those churches, they read what we read on Good Friday, today. However, with the readings we have this year, today really is more like a Passion Sunday, rather than a Palm Sunday, but we’ll try to keep both in mind. God and I did a lot of arguing this week. Partly because I had a hard time figuring out what I wanted to do with this short story, and I didn’t really like the idea that kept coming to my mind.

Not that it’s a bad idea, just so we’re clear, but it just seemed overly simplistic, too on the nose, too ordinary, not creative enough…ok, I was just waiting for some lightning. We must be good to go. I mean, we’re reading the most profound part of the Jesus story and I was trying to muster up something equally profound about it. But nothing was coming. So, I gave in, and decided to go with God’s idea. So here we go. I have something to play for you, it’s not a video this time though, it’s actually a sound. An extra star for anyone who can guess what this sound is...

Anyone have a guess? It’s the sound of a whale, but not just any whale. And not just any kind of whale. This is the sound of one very particular whale, that has come to be known as 52. I wish I had a picture of him but no one has ever seen him. The only way we know he exists is because of his unusual song. Why is it unusual? Because he sings at a frequency of 52 hertz, a frequency that no other whale sings at. Which means, his song can’t be heard by any other whale, but yet he continues to sing, waiting to connect with someone.

He was discovered by the Navy toward the end of the cold war when they were searching for Soviet submarines, and scientists have been listening to him ever since. If you’re in the mood for a fantastic documentary, I highly recommend The Loneliest Whale: The Search for 52 on Hulu. And if this is pulling at your heartstrings like it did me, there’s a bit of good news at the end but I don’t want to spoil anything.

Can you imagine going through life with that level of loneliness? And whether or not that whale is actually lonely is up for debate but we humans surely would be. And I think most of us do have some experience with loneliness. Sometimes it’s very noticeable, like after a death or a breakup or a falling out with a friend. But then there are other kinds of loneliness. Like when you feel like you’re the only one that is experiencing what you are experiencing. Or the feeling that no one understands you. Or the feeling that people would judge you negatively if they knew the real you. All of those and more, even though you know they don’t make a whole lot of logical sense, can make you feel very lonely.

One of the things that has helped me with those less noticeable kinds of loneliness is sharing. Either other people sharing their experiences, or myself sharing my own. Because what often happens, and I’m sure you’ve experienced this too, is as soon as one person opens up about something they’ve experienced, or something they think or believe about something, all of a sudden others speak up. Others no longer feel like they are the only ones who felt that way or who have experienced that. And it’s not that we really believe we’re the only ones who have gone through that or believe that. The aha moment, that brings you out of that kind of loneliness, is finding out just how many people believe the way you do, or have experienced what you have.

Especially when talking about subjects that are still taboo in our society. For those of us who battle depression, of any kind, seasonal, conditional, occasional, or brought on by PTSD, we know that as soon as you mention it in conversation, the floodgates often open. Suicide is another one. For those of us who have had the unfortunate experience of suicide in our families, it can be an eye-opening experience to find out how many others have too. Sad yes, but the world feels a little less lonely after that first person is brave enough to share. It’s one of the things I love about how Bethlehem welcomes new members. It’s not about how much you know or learn, it’s about connecting with people, sharing our lives, walking with each other on the journey of faith.

Ok, so why all this talk about loneliness and whales! Come on, you know me, you know I’m going somewhere with this! And some of you might have already started connecting the dots. One of the things I really like about Palm/Passion Sunday, is the stark contrast between Jesus’ entry into Jerusalem and the events of Holy Week, both of which we got to read some of today. There are many contrasting elements to both events but the one that really sticks out is Jesus’ descent into being alone. We started outside by reading the Palm Sunday story, with all the fanfare and celebration, palms waving and red carpet dropping, singing, “Hosannah in the highest, blessed is the one who comes in the name of the Lord!” Jesus rides into Jerusalem for the last time in his life, like royalty, with crowds of supporters by his side. 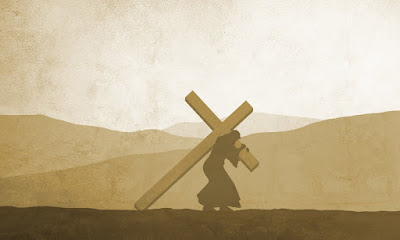 Fast-forward to our next reading, that I just read here inside, and Jesus is having a very different experience. The trial is now over, the sentence has been delivered: execution by crucifixion, and we open this scene with Jesus carrying his own cross. Now, John tells the story differently than the other three Gospel writers. Surprise, surprise. The other three all claim that a person by the name of Simon of Cyrene was ordered to help Jesus carry his cross. Now, there are a lot of scenes where it feels like John attempts to correct their mistakes, and this is one of them. Because the way John tells this story, Jesus carried the cross, by himself, as John says explicitly. And yes, that’s in the Greek, “by himself.” So, who was right? I mean, they can’t all be factual accounts.

Either he had help carrying his cross or he didn’t. Either John has that fact correct or the other three did? Which is it? I’m sorry in advance if this is triggering for any of you but guess what? It doesn’t matter! Yes, one or more of them is wrong but that doesn’t mean that the Gospel or Gospels that got that factually wrong contain any less truth. Our Western minds just have a hard time differentiating facts from truth. Because all of our Gospel writers contain truth because all of them attempt present Jesus in the way that they believed would be most helpful, in the way that they believed would be the most life-giving. And sometimes, it’s helpful to have a Jesus that needed help as he carried his own torture device. John thought otherwise.

Because sometimes we need Jesus to fall into the deepest depths of loneliness, without any helping hand, because so many of us have been there, and we need at least one person in our lives who has been there as well, who knows us, and sees us, and can empathize with us. I don’t know about you but I don’t need a God who feels sorry for me. I need a God who has been in my shoes, who can fit in my size elevens perfectly, and walks with me. So that at least with Christ, I don’t have to feel judged in my loneliness, shamed, misunderstood, or alone.

However, I don’t think that work is up to Christ alone to accomplish. We too can provide that answer to loneliness for people, as we courageously share our lives with others, in the hopes of making their lives a little less lonely. As we continue to sing the song of our lives, just like 52, waiting for someone to finally respond with, me too. In the meantime, thanks be to Christ for walking in our shoes, all of our shoes, in all of our sizes, in all of our styles, so that Christ can always say to us, me too, you’re not alone. Thanks be to God. Amen.