How many of you have been following, maybe even watched some clips from, the confirmation hearings for Supreme Court nominee Ketanji Brown Jackson? They have been quite the roller coaster, haven’t they? I’ve gone from tears to wanting to throw my phone at the TV! I’m guessing no matter your own political leanings, you have felt the same way. They always seem to bring out the best and worst in people. Aside from politics though, they also make for an interesting anthropological case study in communication. Like many introverts, I’m a people watcher. Not in a creepy way but I am perfectly content to sit back and watch how people interact with each other, as long as it’s not with me! I’m kidding. Not really. Anything from the way they talk, to their body language, facial expressions, tone, volume, listening skills, and more, are things that I for some reason, naturally pay attention to.

So, as I watched some of the confirmation hearing this past week, I watched for these things, and I noticed a few interesting patterns, and I bet you noticed some of these too. Did you notice the lack of listening skills in many of the legislators? Things like, lack of eye contact, asking a question and then sifting through their papers looking as if they’re not listening, asking a question and then not letting her answer, interrupting, talking over her. I mean, no matter your political affiliation, can we all agree those are very poor communication skills? Amen? I wonder what their mothers would say if they saw them communicating with another human being that way! It’s more than just poor communication skills though, isn’t it. It’s about respect, it’s about seeing, really seeing, the person you’re talking to.

Because when a confirmation hearing is working the way it should, everyone walks away from it, knowing the nominee better, on both a professional and personal level. For instance, when I was interviewing for this job, I presented all of my previous sermons and was prepared to be asked about any of them. But it’s also in the way people ask those questions isn’t it. It’s one thing to say, Pastor, on such and such a date you preached this and I’d like you to expand on that some more. It’s a completely other thing to be asked, “On this date you said this. Now do you or do you not believe in the virgin birth? Yes or no!” You hear the difference, right? If I had been asked questions in that way, I probably wouldn’t be standing here right now, and would be in some other churches pulpit! And I’m glad I’m not just in case anyone is wondering!

But back to Jesus. In today’s story, we find ourselves finally done with the events of Maundy Thursday, as it is the next day, the morning of the events of Good Friday now. And Jesus is on trial, if that’s what you wanna call it. If they called this a trial, then it was a sham of a trial. So, the Jewish leaders bring Jesus to the Roman governor’s palace, Pilate’s palace. And just a quick sidenote here. Older translations would instead say, “the Jews” here instead of “the Jewish leaders.” Which is both inaccurate and antisemitic. This wasn’t a blanket judgement upon the entire Jewish community as it has been expressed in the past. This was the Jewish leadership driving things here, an elite, powerful, privileged group. This is one of the biggest reasons I don’t use old translations. Words matter, and we can do better. But let’s keep moving. 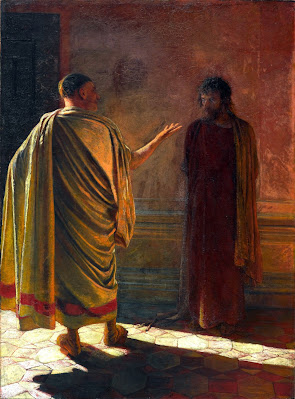 Jesus and Pilate have a short but fascinating conversation. However, I use that word lightly because one of them is better at conversation than the other, because one of them has some really poor listening skills. Pilate is asking some great questions, it’s just too bad he didn’t listen to any of the answers, nor care enough to actually do any real investigation here. And that’s really at the heart of the matter here, isn’t it. If you don’t care, you’re not going to listen. And since he didn’t listen to Jesus, he didn’t see Jesus.

He didn’t see Jesus for who he really was, and he certainly didn’t get to know Jesus in any real, meaningful way. We know this because of Pilate’s last question to Jesus. He asks, “What is truth?” If he had been listening, the question would have been, “Who is truth?” Because Jesus just got done describing himself as the truth, but Pilate just wasn’t listening. And the cost of that unwillingness to listen, was the very life of Jesus. A failure to listen, led to death.

We see the ramifications of this all around us: the lopsided percentage of incarcerated black men in our nation’s prisons, the number of suicides among our transgendered siblings, child abuse and deaths that occur after social services have been involved, or an encampment of people living in horrible conditions on Dewitt in your own backyard. There is power in listening to bring life. And there is equal power in not listening to bring death. I’d like to end by sharing a portion of the current confirmation hearings. Her honor Ketanji Brown Jackson speaks of this power after Senator Alex Padilla asks her what she would say to young people today facing challenges. And this is what she said:

A total stranger on the sidewalk, listened to her. Listening is always done with your ears my friends. A total stranger, a black woman, saw a young black woman at Harvard, listened to her body language, listened to her skin’s pigmentation, listened to her facial expression, listened to the context of her surroundings, and because of that stranger’s listening skills, not only was she was able to see her, for who she really was, but was able to give her a word of truth, that brought, and clearly continues to bring, life to her. Listening, with your ears, with your eyes, with your heart, has the power to bring life. Not listening, has the equal power to bring death. Just ask Jesus sometime. Will you pray with me? Precious Jesus, we’d like to take a moment and thank you, to thank you, not only for persevering that sham of a trial, but also for using that experience to be the best listener we will ever meet. Thank you for never tiring of listening to us, for seeing us as who we really are, children of God, and for taking every opportunity to strengthen that relationship. Give us a heart to do likewise. Amen.
Email ThisBlogThis!Share to TwitterShare to FacebookShare to Pinterest
Labels: abuse, alcoholism, death, hearing, homophobia, jesus, jewish, john, ketanji, leaders, life, listening, nomination, pilate, racism, sermon, skills