Power Redefined: A Three-Part Sermon for The Three Days

Over the course of these three nights, we will explore three distinct ways that Jesus defined power. Let’s get right to it. As I’ve mentioned before, these readings from the Gospel of John haven’t been matching up really well with the church calendar, or at least, not the way that we are used to. For instance, we’ve been reading the Maundy Thursday and Good Friday stories for weeks now, in what has become a very extended Holy Week. But as I’ve also mentioned, I hope you have appreciated the way that this has caused us to slow down and digest these readings in a deeper way.

Tonight, we would typically be reading the account of Jesus washing his disciple's feet, but we read that a month ago. We would also be reading the new commandment that he gave us, the new mandate: to love one another as Jesus loved us. But instead, tonight we find ourselves at the foot of the cross already, which is pretty profound in and of itself.

Meaning, even at this point of the story, Jesus never stops. Even from the cross, Jesus continues to work. Which is why I find this story to be just as relevant for Maundy Thursday as those that we would normally read. In fact, this story might even be more appropriate to read tonight. Let me explain. As Jesus is hanging on the cross, I imagine he looks over and sees some soldiers dividing his belongings among them. And I imagine him thinking to himself, “Well, isn’t that ironic. As I hang here multiplying my love for the entire world, they are busy dividing.” It reminds me of an old Family Circus comic strip where someone asked the mom as she stood there with her four kids, “How do you divide your love among four children?” And the mom says, “I don’t divide it. I multiply it.”

That’s how I see Jesus in tonight’s reading. Hanging there on the cross, multiplying his love for all, while the world scrambles to divide what they can, of something they do not understand. How Maundy Thursday is that! It’s a power that they were unaccustomed to. And maybe us too. But his ability to multiply his power, while amazing, is not what redefines power here, it’s what he does with it, while hanging on that cross. After Jesus is done watching the soldiers make fools of themselves, he looks over and sees his mom, and his best friend standing nearby. I can only imagine the state she was in. Even if we believe that she understood what was transpiring, on a spiritual level, which I do, even still, that was her baby boy. And those of us who had good moms know, ain’t no one gets in the way of a mom and her baby!

But this wasn’t Mary’s time to shine. She had done her job, and done it well. Even in the darkness of that night, Jesus still shines, Jesus still has work to do, Jesus never stops. And here is the first of three ways that Jesus redefines what power is supposed to look like. With blood running down his body, he looks at his mom, looks at his best friend, and gives them to each other, as mother and son, making sure that his mom is cared for in her old age, knowing full well the misogynistic society that they live in, and maybe also to make sure that someone will be there for his best friend, giving him the best mom anyone could ever ask for.

That is how Jesus decided to spend his last remaining moments on earth, in the midst of horrific agony. And that is what power is supposed to look like. Selflessly caring for others, even during challenging times. Caring for the future of others, even when you won’t benefit from it. Caring for others is the first way that Jesus redefines power during these three days. Thanks be to God. Amen. 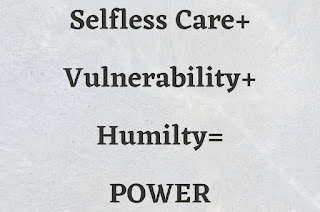 This is a savior who continues to exemplify how we should live, how we should treat others, how we should practice our faith. This is a savior that continues to redefine what power should look like. Tell that to the politicians of our day. But it’s not just a lesson for them is it, but for all of us. We all exercise power of some kind, over others in our lives, and in these stories, I hear Christ reminding us to exercise it with humility; to exercise it with vulnerability; to exercise it by caring for others selflessly. I think this world has had enough of the usual kind of power. Amen? Thanks be to God through Christ, that we’ve been given a new example of power, and though it may not be very popular, it is what this world needs. Amen and Alleluia!
Email ThisBlogThis!Share to TwitterShare to FacebookShare to Pinterest
Labels: care, good friday, gospel, humility, jesus, john, maundy thursday, power, redefined, selfless, sermon, three days, vigil of easter, vulnerability