I’d like you to take a moment and think about the course of your life, from birth to this very moment. Think about all the twists and turns, the paths you’ve taken, the paths you’ve avoided, the choices you’ve made, the things you’ve left undone. And in all that time, I’d like for you to pick out a moment when you feel you were at your lowest. And I don’t mean saddest or depressed. I mean, a moment when you really screwed up. What a way to start a sermon, right! I promise, we’ll end on a high note! But for now, I really want you to select that lowest moment, that moment in your life when you were just wrong, and there was just no other way to look at it. So wrong it’s probably embarrassing to even think about right now. You might be thinking that the person next to you is trying to guess what that moment is for you. Trust me, they are too busy reimagining their own screw-up right now!

Ok, does everyone have their moment? Now, can someone share, I’m kidding! I’m kidding! I would never ask you to do that! This memory is just between you and God. Now, hold that thought as we dive into our story for today. As we discussed last week, we are in an extended Holy Week. Last week we read the story of the events of Maundy Thursday, and today we are still there. Our reading begins with Jesus and his closest followers still sitting at the dinner table, Judas had just left to go and do what he felt he had to do, and Jesus gives them a new mandate, which is where we get the name Maundy from, by the way, mandate, and the new mandate was, of course, to love one another, as Jesus had loved them. But Peter of course just can’t leave well enough alone, can’t keep his big trap shut, and insists on knowing where Jesus is going after this. Jesus said they can’t come but that’s not good enough for Peter.

Jesus says you can come later Peter, but not now. Still not good enough for Peter. Oh Peter. So, Jesus shuts him up by predicting his denial. Which must have felt like a punch to the gut for Peter! Can’t you just imagine him saying, “Well, where the hell did that come from?” Especially because Peter was still riding the high from the foot washing! I mean, his feet are still fresh and clean from when he exclaimed, wash my hands and head too, because he finally got it, he finally understood one of Jesus’ teachings, that in order to be bonded with Jesus, he needed to be served by Jesus. So, here is Peter still riding that high, only to be brought crashing down by this accusation of Jesus’ that he will eventually deny him. That must have been a lot to handle for Peter. I mean, he’s kinda known for missing the mark but to deny Jesus? That seemed like a pretty low accusation.

But Peter isn’t the only one having a low moment. We then skip ahead to after the meal was over. And yes, we skipped four whole chapters, which I’d encourage you to read on your own. Those of you who follow the daily readings in the devotions for home will read most of that section. It’s known as the Farwell Discourse, and if that sounds boring, it is not but it is long, it’s what I have called in past sermons, Jesus’ Looooong Goodbye. All four chapters are just Jesus talking to them, at that same dinner table, giving them his final lessons, his final words of wisdom. But since we’re focusing more on story, we skipped that and find ourselves after dinner. Jesus and his closest followers leave and go to a garden. And if you hear “garden” and think Garden of Eden, or at the very least a place of peace, safety, and serenity, then you’d be right on target. That’s exactly what you are supposed to be thinking here.

Because this was a familiar place for them. It was a place that they had often returned to, maybe to escape the crowds, maybe to feel closer to God, maybe to pray, maybe to reconnect with each other, maybe to reconnect with the earth. It was a safe place, a peaceful place, a sacred place for them. And this was the place that Judas chose to hand Jesus over to the Roman and Jewish authorities. And this is what made his betrayal so downright disgusting. This was the lowest of lows. Talk about a punch to the gut to not only Jesus but to all of them—violating, desecrating, what was once a sanctuary for them. Theologian Karoline Lewis writes that this was the real betrayal of Judas. Again, the downright lowest of lows. But the lows don’t end there.

Peter decides that now would be a good time to pull his sword out. I’m imagining the rest of the gang thinking where the hell the sword come from? Thomas is like, “Am I the only one that didn’t bring a sword?” Peter reaches back with his sword in what looks like an act of bravery but turns out to be quite the opposite. He strikes and cuts off, not a soldier’s ear mind you, a servant’s ear! How low is that? What are you thinking Peter!

They’re not thinking. They’re reacting, and their true colors are showing. And their true colors are not painting a masterpiece, their painting a nightmare, one after another! Jesus comes to the rescue, stops Peter, and steps between his flock and the incoming wolves. When Jesus said a few weeks ago, “I am the good shepherd. I am the gate. I am the door.” He wasn’t kidding. He was being quite literal in fact. And they got to see his words, his heart, come alive right before their eyes. 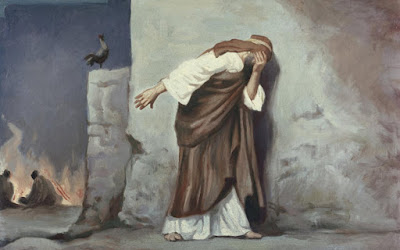 I wish I could say that was the end of these characters' low points but after they arrest Jesus and take him away, Peter finds himself outside the place they are interrogating Jesus, in the high priest’s courtyard. Interestingly, the Greek word here that we translate as courtyard literally means sheepfold. Peter is now in the sheepfold of another shepherd, the high priest. And when asked if he was a follower of Jesus, he says no. Twice! And when asked if he was in the garden with Jesus. He says no again. Now, this can be taken one of two ways because this is different than the way that the other Gospel writers tell it. The other three have Peter being asked if he knows Jesus, and Peter outright lies and says no. That’s not how John tells it. John has Peter being asked if he was a follower of Jesus and if he was with Jesus at the Garden.

So, when Peter says no, he may not be lying here. Meaning, when he says no, he might be saying that due to his recent and current behavior, he has not actually been following Jesus. And when he cut off that servant’s ear, committing an act of violence in the name of Jesus, something our world has seen too much of, he in fact, was not with Jesus, but couldn’t have been any further from him in that moment. I really like this version of Peter’s denial and this interpretation of it because it places Peter as judge, only instead of judging others, he had judged himself. He was at his lowest of lows, behavior-wise and in every other way, and he knew it.

Ok, so we have explored how these characters behaved in some of the worst ways imaginable. Why did we just do that? More importantly, why did John include these stories? These were his friends, why would he air their dirty laundry like this? Just out of spite? Did he think he was superior to them? No. He included these stories, included their lowest of low points in their lives, in order to highlight, to lift up, Jesus and his behavior. Especially in light of what Jesus was about to do.

For it is in their weakness, and ours, it is in their brokenness, and ours, that Jesus is glorified—as the great shepherd of the sheep, the gate, the door, the Word made flesh, the lamb of God, the light of the world, the living water, the bread of life, the resurrection and the life, the servant of all. All these things and more is what Jesus is for you, even when, especially when, your behavior is at its lowest of lows. As he was for Judas. As he was for Peter. As Jesus is for all of us. Thanks be to God. Amen.