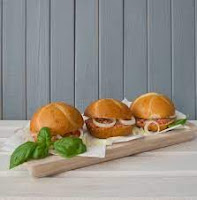 Have you ever been given something to eat, taken a bite, and realized that what was inside was something you didn’t expect, maybe even didn’t like, and had you known what was inside, you may have said no thank you! What do you do? Do you spit it out? Do you just push through and try to be respectful? What if it makes you nauseous, and spitting it out might make it even worse? Have you ever had an experience like that? I’m guessing many of us have had some kind of experience like that. 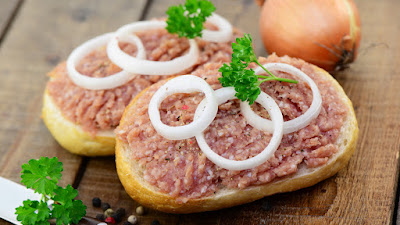 Have you ever had Zwiebelmett? It’s a German sandwich. From afar it looks like a typical cold sandwich. But once you bite into it, you realize it is not. The bread makes it look very inviting but inside, it is filled with raw minced meat and raw onions. You heard that right, raw minced meat and raw onions. Now, I’m pretty adventurous but if someone gave me that and didn’t tell me what was in it! I don’t even want to know how I’d react! 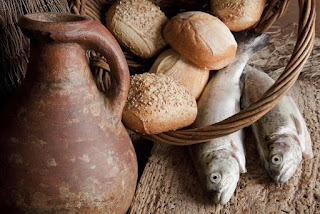 Speaking about food, food seems to be on Jesus’ mind in our story for today from the Gospel of John. Right out of the gate, Jesus begins with, “I am the bread of life.” The passage that I read is part of a much larger narrative that really begins at the beginning of this very long chapter. The whole thing is seventy-one verses long! I only read verses 35-59. You can thank me later. But I was tempted to read the whole thing because the chapter opens with the feeding of the five thousand, so you can see the connection already right, as Jesus talks about being the bread of life after having filled their bellies. We also skipped the story of Jesus walking on water, which is a story about Jesus’ identity but also about trust—two key components for today’s story. So, all of this is what leads into Jesus declaring himself to be the bread of life.

He follows that up with, “No one who comes to me will ever be hungry; no one who trusts in me will be thirsty. But as I told you, you see me and still don’t trust me.” Right away you understand that Jesus is talking about something more than literal bread and hopefully they did too. Remember, some of these people he was talking to were just fed by Jesus and as filling as I’m sure that meal was, they had leftovers if you remember, they still got hungry again. Like the woman at the well, Photini, from a few weeks ago, they were left wondering if there was more to life than what they had experienced. Was the rat race of just getting your next meal, satisfying your and your family’s physical needs, today and for their future, all there was to life? Even the rich eventually come to this same question after they realize that despite all they have, it’s never enough. Is there something more? Jesus gives us a decisive “Yes!” but it’s not exactly what we’d expect. 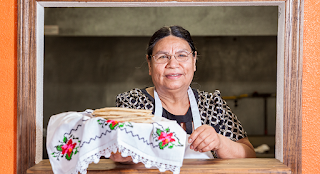 Because bread of life sounds nice, doesn’t it? Bread is always inviting. Who doesn’t like bread? Home-baked bread from your mom or in my case, homemade tortillas, still hot, with some butter. Oh man, nothing like them in the world! But that’s when Jesus takes a very drastic culinary turn. Like wheels screeching, you’re suddenly in a different seat kind of drastic turn—when Jesus says, “…the bread I will give for the life of the world is my flesh.” The temple leaders look around at each other, scratch their heads, clear their ears with their pinkies and ask, “Did he just say what I think he said?” And in typical Jesus fashion, he not only repeats it, he doubles down!

Jesus says, “Those who eat my flesh and drink my blood have eternal life, and I will raise them up on the last day. For my flesh is real food and my blood is real drink. Everyone who eats my flesh and drinks my blood lives in me, and I live in them. Just as the living God sent me and I have life because of God, so those who feed on me will have life because of me. This is the bread that came down from heaven.” He just gave them a Zwiebelmett sandwich! It may have looked like a tasty sandwich with homemade bread, but it was anything but! Aside from this sounding utterly disgusting, Jesus’ flesh and blood, not the sandwich, I don’t want to insult any German listeners or anyone who likes to eat raw meat for that matter, but aside from that, this was just too much for the typical Jewish listener to handle.

But before we go any further, I’d like to say a few words about what John means by eternal life. I won’t bore you with another Greek lesson but this doesn’t mean what you probably think it means. We’ve been indoctrinated to believe that when John says eternal life he means living forever, being immortal, going to heaven. I hate to break it to you but that is not what John is talking about here. I’m not saying that John didn’t believe those things, I’m just saying that that’s not what he’s talking about here. What he is talking about is the kind of life that God calls us toward. Another way to translate it might be, a heavenly life, rather than eternal life. Or maybe a Godly life. Or, maybe just, real life. God’s plan for us is not just survive, but to live, really live, in the here and now, not in some far-off place after we die. Now, what that looks like is going to be a bit surprising so let’s get back to the story. Now where were we, oh yes, Jesus’ blood and gore…

Eating meat with its blood still in it was against their law. But human meat? Human blood? This was just too much! Why would Jesus do this? Why would he ruin a perfectly good-tasting bread metaphor? Well, many scholars over the past two millennia have tried to tackle this. And many of them make a lot of sense! But I’d have to side with the scholars that have taken a very simple approach to this. I mean, why make it more complicated than it already is, right? Ok, so, one, Jesus loved to shock people into thinking in a different way. Most of his whole ministry was trying to get people to think differently, about God, about life, about each other. And it was a way of thinking that was very counter-cultural, so much so that it was thought of as deviant and dangerous by those in power. But to get people on the road to thinking differently, sometimes you gotta snap them out of their current way of thinking with something that has some shock value, hence, the whole eating his flesh and drinking his blood!

But let’s go deeper than that. Because if you know how this story ends, spoiler alert, Jesus dies a horrific and very bloody death, then anytime Jesus mentions his flesh and blood how can we not think about his death? And more importantly, how can we not think about the sacrificial way that he lived? And let’s take just one step further, and talk about the sacrificial way that Jesus calls us to live. That’s what Jesus is really talking about here after all. And thankfully, Jesus doesn’t try to hide it inside a nice warm homemade buttered tortilla, but tells us, upfront, that following him, isn’t going to be pleasant, it might even make you a bit nauseous at times, and it’s certainly going to involve sacrifice—like any healthy relationship does. Whether that relationship be with God, your spouse, your sibling, your parent, your child, your friend, your church, or the total stranger you meet at the grocery store who’s wearing a t-shirt in support of the other political party. 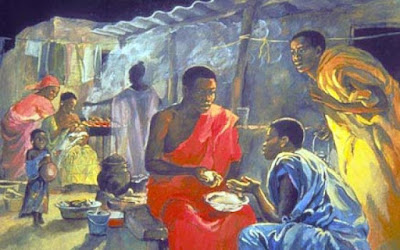 Following Jesus, eating the bread of life, will always involve sacrifice, will always involve giving without any assurance of a return. That’s why the bread of life can be less homemade tortilla and more Zwiebelmett sandwich—with all apologies to our German siblings. And so, when you take communion next, with your little morsel of bread or wafer, and grape juice or wine, thankful for all that God sacrifices for you, I invite you to also ponder the ways that God may be calling you to Christ’s sacrificial way of living. And if the thought of that way of life seems a bit scary, seems a bit overwhelming, maybe even makes you a bit queasy, know most assuredly my friends, that you are on the right track, that you are on the way to living, really living, the way God intended, in the hear and now, for the sake of the world, always, for the sake of the world. Thanks be to God. Amen.
Email ThisBlogThis!Share to TwitterShare to FacebookShare to Pinterest
Labels: blood, bread, communion, death, dying, flesh, human, jesus, john, life, living, sacrifice, sermon, shock, tortillas, zwiebelmett