As you may have noticed on the front of the bulletin, today is Transfiguration Sunday. And for those of you who are biblically astute, you also noticed that what I just read was not thee Transfiguration story. Why, you ask? Well, the explanation is simple. John did not include that story in his Gospel. The other three Gospel writers did. He did not. John also didn’t include the story of the Last Supper. Gasp? I know! Shocking! As I’ve mentioned before, this is a very different telling of the Jesus story than the other three, but let’s get back on track. So, since we’re reading through his gospel, we don’t have thee Transfiguration story to read. However, I would still call this story of the One Born Blind a Transfiguration story, you’re just gonna have to use your imagination with me a bit to get there. First off, what is transfiguration?

I know, that sounds like the beginning of the most boring sermon ever, I hope to God it is not. Usually on this Sunday we read the story of Jesus going up a mountain with his closest followers and his entire being is transformed into radiant light and Moses and Elijah even make a guest appearance with him to have a little chat. And every year on this Sunday we read that story from one of the other three Gospel writers and call it Transfiguration Sunday because Jesus was transfigured into glorious light before their eyes. However, what we often fail to realize is that Jesus wasn’t the only one transfigured on that mountain, and I’m not talking about Moses and Elijah either. I’m talking about those followers that came along for the ride that day. I assure you, they did not walk down that mountain with Jesus the same people.

Hold that thought, and let us take a look at this story that John gives us for this day. It was very long I know, and we don’t have time to take this verse by verse, but I think it was worth the time to read it all. Because what we find is that sight is the name of the game throughout the story, and the healing of the blind one was just the tip of the “sight” iceberg. The story begins by pointing out what Jesus saw, the one born blind. Immediately after, John writes that Jesus’ followers ask, “Rabbi, was it this individual’s sin that caused the blindness, or that of the parents?” Now just take a moment and sit with that for a bit. Sit with the different ways that Jesus, and his followers, see. Jesus saw a person who was born blind.

The key phrase there being, Jesus saw a person. His followers, saw sin—whether it was sin in that person, or the sin of the parents, or ancestors. Where Jesus saw a person, they saw sin. And what Jesus did next began the process of his transfiguration in their eyes. Because what he did next was going to change the way they saw him forever, not just on a mountain top meeting—forever. He tells them three things. Jesus tells them that sin had nothing to do with it. He tells them that if God’s works are gonna shine forth in them then we’re gonna have to work together with him. He ends by reminding them that he is the light of the world, intimating that they too have a part to play in the shining of that light. All very new and challenging concepts! And then, almost as if to give them a visual representation of what he’s talking about, an ancient form of a PowerPoint, he heals the one born blind.

I can imagine the look on Jesus’ face as he turns from those newly opened eyes and looks into theirs, as if to say, are you connecting the dots here, people? I can’t do all the work for you! They needed to allow his transfiguration in their eyes, to transfigure their eyes so that they could go out into the world and see differently, see the way that Christ sees the world, because that is the only way healing happens. They couldn’t see the one born blind as anything more than a child of sin and therefore the one born blind was relegated to a life of poverty, begging on the street. Jesus on the other hand, saw not a child of sin, saw a child of God, and healing was the direct result of that. But that can only occur after transfiguration has happened, after such a drastic transformation happens that sight is actually changed, as drastic as sight to the blind.

Here's where it gets problematic. What do you do when transfiguration feels like disfiguration? Remember those new concepts that he threw at his followers? That being blind had nothing to do with sin? That they were going to have to do the works of God with him? That Jesus’ light will shine its brightest if it goes through them? These weren’t just new concepts these were new theologies! These were new ways of thinking about God and about themselves and about the world! Jesus was upending their whole outlook on life and if you’ve ever been asked to change the way you think then you know how uncomfortable that was for them. And Jesus was just getting started! This was easy stuff compared to what was ahead for them—compared to what they were soon going to be asked to unthink and rethink, to unbelieve and believe anew, to unsee and then see with new eyes!

Those of you who have endured this know how painful this process can be, know how disfiguring it can feel. Why? Well, partly because change is usually unpleasant, and anything worth doing usually entails hard work. But more than that, especially when talking about being transfigured by Christ’s transfiguration, it goes against our grain! It’s not how we humans are built. The ancients of our faith called it original sin, I don’t know about that but what I do know is that we humans are built, genetically speaking, to look out for number one, to survive at all costs, even at the cost of those around us. The exact opposite of the way that Jesus taught us to live. Just take a look at the other people in this story from John for some examples of this.

The Pharisees, the ones who are supposed to be with bearers of wisdom, the ones who should have the keenest of eyes, who should know the ways of God better than any of them, turn out to the blindest of them all. Blinded by power and greed and a downright destructive god complex. They can’t see Jesus for who he is, let alone the one born blind, who they now not only think is a sinner but also a heretic as well! Not even his parents are immune to this blindness. They don’t really care who healed their child! They just know that their child was indeed healed! Too blinded by their fear of the authorities to be transfigured by this experience. Even after their own child was healed by the living light of the world. 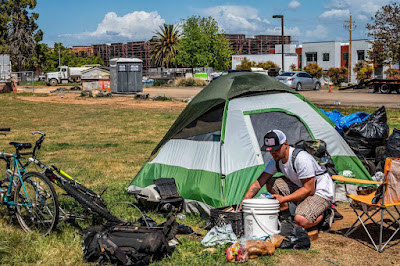 For a modern example of this, I got a taste of it when I attended the last Placer county board of supervisors meeting. I attended because of a newly proposed ordinance, that would greatly harm our houseless population, particularly in Auburn. As I listened to the way that people talked about the houseless, even if they didn’t necessarily say they were speaking in favor of the ordinance, I could easily tell which side they were on. Aside from speaking from a stance centered on the self, their property, their safety, their city, aside from that, they would speak of the houseless as either those people, at best, or at worst, as objects. In just their language you could hear their blindness, their inability to see our houseless population as fellow human beings.

At the end of our story, Jesus seeks out the one he healed and asks, “Do you trust in the Chosen One?” The healed one asks, “Who is this One, that I may place my trust?” Jesus says, “You’re looking at him.” And the healed one responds with an immediate, “Yes, I trust you.” And the transfiguration of the one who was once blind was complete. After being healed, and seeing Jesus face to face, trust blossomed. But it’s easy, and I don’t mean to disrespect that once blind person, but it’s easy to trust in what you can see, isn’t it! It’s a whole other question to trust in what you can’t see. And one thing that we can never see, is the future. I’d be a tone-deaf pastor if I didn’t have on my mind while I wrote this sermon of the very important congregational meeting we have ahead of us today.

For so many churches today, most of them I suspect, each and every congregational meeting is more important than the last, each and every congregational meeting is heavier than the last. I know I’m not the only one that feels that weight. People don’t value church the way that they used to. People don’t attend church the way they used to, and even those that do have redefined what regular attendance is. People don’t give financially to churches the way they used to, for a variety of reasons, many of which are out of their control, but not all. I could go on as to why each congregational meeting is heavier than the last but I’ll save that soapbox for another day. What I believe is at the core of that heaviness is our inability to see the future. But instead of giving us a break, Jesus wipes the mud from our eyes, knowing we still can’t see the future any better than before, and still looks us in the eye and asks, “Do you trust in the Chosen One?”

If you can say yes to that question, “Do you trust me?”, you will radiate Christ’s light so bright, the future will see you coming, forget us needing to see the future, the future will see you coming, and get out of the way. Now, anyone who knows me knows that I am no optimist. I know we have a lot of hard painful work ahead of us. And I also know that money ain’t gonna fall from the sky. But I ain’t no pessimist either. I mean, how can I be, when the one that I follow, the one that I’ve devoted my entire career and livelihood to, is the living light of the world? And so my prayer for us this day and every day but especially this day, is that we allow the transfiguration of Jesus to transfigure us into something new, and that it give us eyes to see, if not to see the future, fine, then eyes to envision it, imagine it, dream it, and the will and strength and courage, to give it a shot. Thanks be to God. Amen.