Whew! That was a long one! And we didn’t even read the whole thing! We read enough of it though. One thing you will notice about Jesus in the Gospel of John is that he can be a bit long-winded, and this is the first of many examples of that. Just bear with him, he usually gets to his point eventually. Usually. Anywho, something that John likes to do is pair stories together. Last week we read about poor old confused Nicodemus, and it’s no coincidence that this story of the woman at the well comes right afterward. That’s on purpose, as almost everything else about this Gospel is. Remember, Nicodemus was confused about being born from above, or born anew, or born again, however you want to translate it. He just couldn’t wrap his head around how someone could be born a second time!

And then in walks the woman at the well to show us how. And that’s exactly what she does, she shows us what it looks like to be born again, born anew, born from above. She plays this out for us to watch with our own mind’s eye, all the while becoming the first evangelist. You heard that right, she becomes the first person in the Gospel of John to have an encounter with Jesus, and then go spread the good news of that encounter with others. And that can only happen because she was born a second time, born from above. So let’s see how that happens exactly. The story begins with John pointing out that Jesus was traveling from Judea back to Galilee. And John says that he had to go through Samaria.

Now, if you were reading this hot off the press, you would already know that something fishy was going on here. Why? Because no self-respecting Jew would go through Samaria! Ever! It just wasn’t done! If you look at this route on a map, yes, it is the fastest way there but that didn’t matter. John writes, “Jews and Samaritans didn’t associate with each other.” Well, that was putting it mildly! Jews did not see them as part of their own people, even though, they could trace their lineage back to Abraham. Their lineage, however, took some, let’s say, Gentile, non-Jewish detours, and that made them unacceptable to the Jewish community. And so, Samaritans were treated as second-class citizens at best. At worst, they were thought of as unclean, the kind of unclean that would make a person have to go to the temple in Jerusalem to be made clean again after coming in contact with one of “them.”

So for John to say, Jesus had to go through Samaria didn’t make any sense. Unless, you had just read the previous chapter where Jesus said, “And God so loved the world…” That is going to be the litmus test for not only this story but for the rest of this book. If Jesus was telling the truth, that God really did love the world, then he was going to have to prove it over and over and over, all the way to the cross. Because that was not the kind of God that had been taught in Sabbath school. And John uses the story of the Samaritan woman at the well, as exhibit A in proving that Jesus was indeed telling the truth. Because being a Samaritan wasn’t the only thing this poor woman had against her. She was a woman, and as we’ve learned from other Bible stories, women were not thought of as equal to men, far from.

A woman in that day was entirely dependent on the males of her world. Without a man, she would be at the mercy of so many who would either take advantage of her, or dismiss her to the margins of society to fend for herself for food, shelter, and the basic necessities of life. This is why there were so many prophets who scolded God’s people for not taking care of widows and orphans. In hindsight, I wish they’d spent a little time scolding them for their misogyny but whatya gonna do? In fact, the misogyny was so bad that this woman, the first evangelist, wasn’t even given a name! She’s just “woman by the well.” Like she’s just some extra in a movie. Thankfully, the early church not only gave her a holiday but also a name, Photini, Saint Photini. So that’s what we will call her for the rest of this sermon. It’s the least we can do as we attempt to restore her to her rightful place in our faith family.

So, Saint Photini’s got her ethnicity working against her, her sex working against her, her religion working against her, surely that’s enough for her to have to deal with, right? Of course not! She’s also going to have placed upon her the weight of a questionable morality. For centuries, to this very day in fact, the church has called her morality into question. When Jesus points out her five husbands and the man she’s currently living with, the church over the centuries, mostly male, have assumed that it reflected upon her morality, sexual morality. Oh, let’s not mince words, the church has labeled her a whore and a slut. If you don’t like those words being used in a sermon, trust me, neither do I. But like we learned last week, if we don’t shine a light on things that need to change, they’ll never change. Somewhere there are pastors, maybe right now, that are preaching and teaching that Saint Photini was a tramp, that that was her sin that was holding her back, and then looking out at all the young women in their congregations as they preach that nonsense. That has to stop, now.

Especially because of all the pain that this must have caused Photini. She had either gone through five husbands due to death, or from some petty divorce that only the man could initiate, or divorced because she was unable to bear children. And the man who she’s currently with is probably a brother-in-law in what was known as a levirate marriage but we can talk more about what that was on Wednesday night. Not only that, but whatever the reason for her going through five husbands, the community would have interpreted that as a sign of God’s judgment upon her for something she or her ancestors had done. I’m tell’n ya, if there was anyone that deserved a break from the darkness of life, it was Photini. 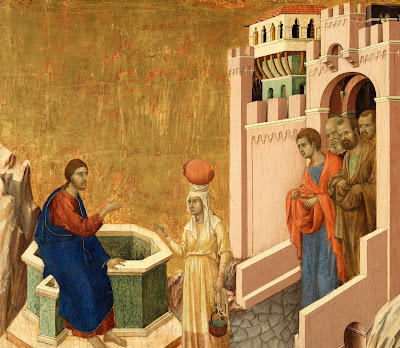 I can’t help but wonder how she made sense of it all. What must have been running through her head, day in and day out, as she walked to that well in the heat of the day, carrying all that weight. “Is this it?” she may have asked herself. “Is this all there’s gonna be to my life?” she may have asked God. “Is there nothing more?” she may have asked from the deepest, driest part of her heart. All of this, all of it, is behind her response to Jesus, “Why do you, a Jewish man, ask for something to drink from me, a Samaritan woman?” In other words, “I can’t even take care of myself in this world, and you want something from me? I’ve got nothing to offer anyone in this world! I have nothing! I am nothing.”

And it’s at this moment when Jesus brings up Photini’s five husbands. And I know, at first glance it almost seems as if Jesus is kicking her while she’s down but bear with me, that is not what he is doing, nor is he judging her for anything, anything! He does this to show her that he knows her! He sees her! He knows her pain, her struggle, her loneliness. He knows the world that she has been thrown into. Because the “Word made flesh” means nothing if he doesn’t know the weight that she has been carrying upon her head for so many years. Because “God so loved the world” means nothing if that love doesn’t extend to everyone, even to the least likely person in all of scripture, the one with the most strikes against her, the one that life had dealt the worst hand, to dearest Photini.

It is then that she realizes that something else is happening here—that this isn’t just any water that this strange Jewish man is talking about—that this strange Jewish man isn’t just some random guy but must be a prophet! “No, maybe not just a prophet, but could he be? No. Yes. Could he be the one?” It’s at this moment that Jesus confirms her suspicions. And it is at this moment that she is reborn and is able to do something that she has longed to do for so long—take that water jar off her head—and everything that it represents to her—and put it down—leave it behind—and move on in the assurance that God had not forgotten her, nor cursed her—that God knew her, all of her—that God was with her.

She left that well a new woman, a new person, born anew, born from above. She left that well lighter, freer, moving forward for the first time in so long. she left that well with the discovery that there was indeed more to life, in fact, she discovered that there was more to her than she ever imagined. She came to that well as just some random woman that society had left behind. She left that well as Photini, which means luminous one. Fitting, isn’t it! Luminous one! My friends, her story is our story. We are all Photini. We are all luminous ones! Born anew. Everyday. Born from above. Every time we remember that God loves us. Yes, even us. With all our faults, with all our gifts, with all our baggage, with everything that makes us who we are, God loves us still, and includes us in God’s great family. And how else could we respond, than the way that Saint Photini did, by going out into the world to be the voice of Jesus that says, “Come and see!” Come and see. Blessings to you O luminous ones! Thanks be to God. Amen.