Go Into the Light!

Inspired by John 3:1-21 (sermon audio with movie clip above)

Unlike last week’s story, I think everyone loves this one, especially the character of Nicodemus. He’s such a relatable character for starters, but he gets to do what any of us would love the chance to do, have a one on one conversation with Jesus. And the fact that it doesn’t go the way he had hoped, just endears him all the more to us. Now, there’s a lot going on in this story. Too much for us to cover in any one sermon. It’s one of those stories where the preacher just has to pick on thing and run with it. And so that’s what I’ve done and probably to the dismay of many, the one thing I’ve chosen is not John 3:16. I’ll save that for our Wednesday evening Bible discussion on Zoom to share with you all the reasons that verse frustrates the hell out of me. For today however, what really spoke to me was John’s continuing theme of light and darkness.

John has been fascinated with light and darkness since the opening verses of this book. And that theme continues strong throughout this entire story surrounding Nicodemus. So let’s explore this a little deeper. The nice thing about John is that he does a lot of the interpretation work for us. He does like to be mysterious but he’s also not afraid to explain things for us too, which he does at the end but we’ll get there soon enough. The story opens with the detail that Nicodemus came to him in the dark. When reading the Bible, there really is no such thing as a trivial detail. If you’re ever reading the Bible and you think to yourself, well, that was a weird detail to include. Trust me, there’s a reason for it, and it’s usually worth digging into.

Now, not every scholar agrees why this detail was included. Some say that Nicodemus was hiding from his colleagues, not wanting them to know that he had this conversation with this very controversial figure that Jesus had already become. Others say that it was a reflection of his own shame in questioning his own beliefs. And still others say that it was a literary device that John used to express the confusion that Nicodemus was experiencing; just to give you a few of many differing opinions on this darkness that John mentions. No matter which take you seem to lean towards though, the prevailing consensus is that dark is bad and light is good. Now, I’m not necessarily disagreeing with that, but I also don’t believe that John believed that this was always true. But let’s keep moving through some more of this story.

Nicodemus comes to Jesus with some kind words, acknowledging that Jesus does indeed come from God. But rather than just saying thank you, Jesus comes at him with what sounds more like a riddle than anything else. And I can’t help but feel sorry for Nicodemus right away. Now, we don’t know what he was looking for, we don’t know why he even wanted to talk to Jesus. But a riddle? I can only imagine his disappointment. Imagine getting to meet the wisest person you can think of only to get a riddle that you don’t understand. And even after asking for some clarification, Jesus doesn’t really help him out, just repeats what he already said in a longer, mind-numbingly philosophical way! Poor Nicodemus! In exasperation he asks one final question, “How can these things be?”

You can almost hear the desperate confusion in his voice! What follows is a lengthy response from Jesus, that just so happens to include the most beloved Bible verse of all time, but it doesn’t seem to be enough for Nicodemus. We don’t hear from him again until much later in the book, but for now we can only imagine him walking away from this encounter with Jesus, head hung low in disappointment. Now, though Jesus gives us lots of content that we could sink our teeth into, I’m not as concerned with the content of their conversation right now as I am with the nature of their conversation. I think that’s where one of the real gems is in this story. Because even though Nicodemus came in the dark, I don’t think he left in the dark, not completely anyway.

We western thinkers would say wisdom comes with answers. Not only do we like to have the answers but we like things in black and white, right and wrong, this way or that way, and nothing in between. But that’s rarely how life works, and it’s not how faith works either. Wisdom doesn’t always come with clear answers. To say that in faith language, grace doesn’t always come with clear answers. Jesus’ riddles may have been frustrating for Nicodemus sure, but that’s not the only way to see their conversation. Some may see the grace of this story in John 3:16, and they certainly wouldn’t be wrong to see grace there but that’s not where my eyes go.

My eyes see a person, deeply entrenched in a religious institution, who is having core beliefs questioned, going to Jesus from the utter darkness of his soul, and not being turned away, not being shunned for questioning, not being made fun of, but rather welcomed, listened to, and given answers even if they weren’t the ones that he was hoping for. Said another way, Nicodemus went into the darkness to have an encounter with the light of the world, Jesus, the Word made flesh. Wait a sec pastor, does that mean that not all darkness is bad? You got it! Sometimes, the darkness is where we have are most profound encounters with the light. And also our most painful. Because what John is also teaching here, is that not all light is good. 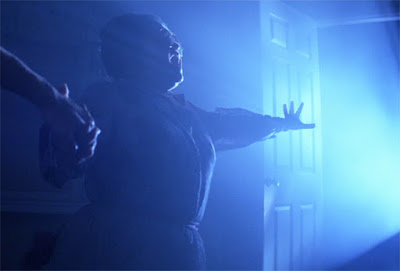 And even when it is good, it isn’t always a pleasant experience to walk into. At the end of our story Jesus talks about how us humans have a tendency to like the dark more than the light. Why? Because the light exposes us for who we really are. And that is a scary proposition! Being told to walk into the light sounds more like being told to walk to my death! I don’t want to be exposed for who I really am! But how else are we to grow? Not to get ahead of ourselves but we are people of death and resurrection. That’s kinda of schtick, isn’t it! Aren’t we always saying that we can’t have new life without dying first? Well, whatever has to die in us, whatever has to be transformed in us, first has to be exposed. Meaning, step one is walking, willingly, fearfully, into the light. This reminds me of that classic scene from the movie Poltergeist. You know the one I mean? If you haven’t seen it, it’s the story of a little girl who gets snatched away into the afterlife by some angry ghosts and in order to save her, they have to convince her to walk into the light, which is not only scary for her but also for her loved ones too. Here, let me just show you…

What a classic. And what an image for how scary Christ’s light can be for us. As you think about your own journey with Christ, have there been some scary moments for you? I bet there have! Maybe it was about the inclusion of the LGBTQ community. Maybe it was about the inclusion of women as pastors. Maybe it was about how we interpret the Bible. It could be any number of things but if you’re anything like me, your journey with Christ has been a bit of a roller coaster, a scary one! Hopefully it hasn’t been a horror movie but maybe it has! What I hear God calling us toward in this story is twofold. One, in spite of any fear we may have to walk into the light, to remember that new life is on the other side. And two, because we know how scary the light can be, we have the blessed opportunity to walk with others as they enter the light, with love, and patience, and care, and a whole lotta grace. Blessings to you my friends as you walk into Christ’s transforming light. As painful as it can be, remember that you are not alone, and that new life is promised on the other side, for you, and for those around you. Thanks be to God. Amen.