This is one of those stories that you either love or hate. Some of us love the Jesus that can be a bit unhinged at times. Some of us find that refreshingly relatable. And others not so much, others find this a bit disturbing and need their Jesus to be levelheaded at all times, professional if you will, and they find ways of explaining away Jesus’ behavior in this story by saying things like, this was a “righteous anger.” Whatever that means. I don’t know what it’s like to be divine, but I do know what it’s like to be human, and anger is anger. And let’s be honest, anger is always justified…to the one that is angry. So, this sermon will not be about Jesus’ anger, whether it was justified or not, whether he woke up on the wrong side of the bed or not, nor will it try to justify our own anger and violent threats we make in Jesus’ name. John has much more important things to reveal to us here.

So, let’s dive right in. We pick up right where we left off last week. It’s still very early in Jesus’ public ministry. They traveled from Cana to Capernaum and now he has arrived in Jerusalem for the first of three visits there for the big Passover festival. Like the good Jewish young man that he was he goes straight to the temple and that’s where the wheels fall off the wagon. What he witnessed there made his blood boil and he just couldn’t hold it in. And what he witnessed were animals being sold and currency being exchanged. Now here is where I have to pause the story and point out two major differences in John’s telling of this story, compared to the other Gospel writers.

The first is the placement of this story. The other Gospel writers place this story in the middle of their books, making this the final straw that caused the Jewish religious leaders to want him dead. John places this story at the beginning, making another event, the raising of Lazarus, that final straw. But we’ll talk more about that when we get there in John. The other difference in John’s version, which is more applicable to this sermon, is what exactly triggers Jesus. In the other Gospels, it’s the dishonest practices he saw in the temple, remember he called it a “den of thieves.” This is not how John tells this story. For John, it’s not their malpractice that triggers Jesus, it’s something else. For a clue, we need to keep moving. 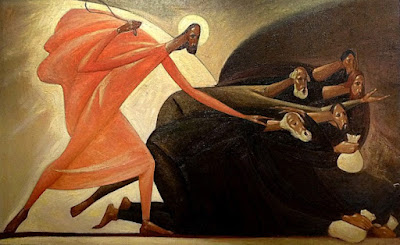 After making a scene, going full-blown Indiana Jones on them, he finally says, “Get these things out of here! Don’t make God’s house a place of business.” Now, what did Jesus mean by this? For some backstory, the reason why they were selling animals and exchanging currency at the temple was purely for religious reasons. The animals were sold to be used as sacrifices in the temple for the Passover festival. And the money had to be exchanged from Roman coins that had the image of Caesar on them, which couldn’t be used in the temple for fear of breaking the commandment regarding idols as the Romans thought that their emperors were divine. That, and no self-respecting Jew would bring to the temple the image of the one who had brought them so much pain and anguish through the occupation of their homeland!

So, all of that is to say that, whether or not there was malpractice going on here, that is not the issue for Jesus. Jesus knew full well that the selling of animals and exchange of currency was necessary for the temple to work properly. So what was his problem? The whole system was the problem! The whole shebang! Jesus was saying that this whole sacrificial system was the problem! It was never meant to be that way! And no disrespect to Jesus but he was not the first one to point this out! This was not a new idea. As we have seen over the past four years of reading through the Hebrew scriptures each Fall, time and time again God has said that it is not sacrifices that God wants, but rather a changed heart.

Remember this classic from the prophet Amos that we just read this past Fall? God said, “I hate, I reject your festivals; I don’t enjoy your joyous assemblies. If you bring me your entirely burned offerings and gifts of food—I won’t be pleased; I won’t even look at your offerings of well-fed animals. But let justice roll down like waters, and righteousness like an ever-flowing stream.” I know, it’s not the kind of passage that gonna make a greatest hits album, but it’s just one example of God rejecting the whole sacrificial system that they had put into place, and Jesus is just following suit. Because Jesus knew, that God’s love and forgiveness are free. No strings attached. Period.

That’s why, if Jesus was ever on one of those reality TV shows for young entrepreneurs like Shark Tank or The Apprentice, he’d have been eliminated in the first round! “Follow the green, not the dream”, they would have told him! Or the good ol’ classic, “You’re fired!” Because if grace was a product, and Jesus was in the business of selling it, he’d have been the worst salesman ever! Why? Cuz he’d never see a profit! He’s too busy giving away too much product, too many free samples! Well, now I’m making him sound like a drug dealer but you get my point! Grace was never meant to be a business. It was never meant to be sold. God’s love cannot be gained with a transaction. It’s freely given, for you, for me, for everyone. No strings attached. And that’s not the way humans work, is it?

And I think that’s why Jesus’ version of Christianity isn’t that popular. It goes too much against the grain of our humanity. At the end of our story John shares that even though many people believed in Jesus, he didn’t entrust himself to many of them. Why? Because he knows how people are. John writes, “He didn’t need anyone to tell him about human nature, for he knew what human nature was.” How, because he was the Word made flesh. It was both his gift and curse. He knows us at our best, and also at our worst. And our worst can be pretty darn bad. And he still had a long way to go in his public ministry, as it had just gotten started.

Tomorrow we commemorate Dr. Martin Luther King Jr. We remember not only his work but all who have followed in his footsteps to fight against racism and many other isms. And as we do, I pray that this story that John has shared with us today, is yet another reminder that it is not our worship that defines who we are, nor is our faith a rat race to find God’s grace. May this story from John cement in our minds and hearts, that since God’s grace is freely given, we are free to “let justice roll down like waters, and righteousness like an ever-flowing stream.” All because Jesus is the worst businessman the world has ever met. Thanks be to God. Amen.