A Taste of Grace

Ron Valadez · A Taste of Grace

Sermon and worship inspired by John 2:1-11, (press play above)

Today is the first Sunday after the Epiphany, which is always on January sixth. That is the day that we remember the visit of the magi to the toddler Jesus. The word epiphany simply refers to a first appearance or revealing of something or someone. Sometimes an epiphany is a new idea that pops into your head. And sometimes it’s the appearance of the savior of the world. The Gospel of John is the perfect Gospel to be reading during this in-between time, this odd little span of time between Epiphany and Ash Wednesday.

It’s the perfect Gospel because John’s one and only priority is to reveal to you, the grace found in the life, death, resurrection, and ascension of Jesus Christ, to reveal to you, what grace looks, smells, feels, sounds, and in today’s story, tastes like. It’s a tall order but John is up to the task! Our job will be to continue to ask, with every story that John shares, “What does this reveal about Jesus, the Word made flesh?”

With that in mind, let’s forge ahead. Now, it’s gonna take everything in my power to not make this all about mother Mary. I’m gonna have to rely on my seminary training to keep Christ central, but I could tell when I first started preparing for this sermon that it was going to be tough not making this all about her. Not only is this one of only two appearances of Mary in the entire Gospel of John, the other being at the foot of the cross which creates these mind-blowing bookends to their relationship, let alone the entire book, but in this story, Mary is soooooo integral to the telling of this story. On top of that, it is her example that we are called to learn from here. Like I said, this is gonna be tough! So, just in case I screw this up, I want to be on record as saying, Christ is always central! Now, let’s start building that pedestal for Mary, I mean, let’s dig into this story!

So, we are only three days into Jesus’ ministry in the flesh. A few followers have been gathered, and right away he gets an invitation to a wedding. We have no idea who got married, whether it was a friend of the family, a relative, a follower, we have no idea, but Jesus, his mother, and his followers are invited as guests. He’s not the host, not the guest of honor, just a regular ol’ guest at a wedding. Remember, he hasn’t done anything yet, at least, not according to the four Gospels that made it into the Bible. He hasn’t drawn the attention of the Jewish elite, the Jewish religious leaders, nor the Romans. In fact, the only people that have taken notice of him are his mom, his handful of followers, and John the Baptist. Aside from them, he’s still a nobody. Last week we talked about Jesus’ first words in this Gospel.

Well, this story contains Jesus’ first sign. John doesn’t call them miracles, he calls them signs. Remember, John is revealing Jesus to you, so it makes way more sense to call them signs, rather than miracles. And I like that for another reason, because it acknowledges that Jesus was much more than a magician, which is how he gets treated often. Even today it’s so easy for us to pray to Jesus as if he is the great magician in the sky. That is not the Jesus that John reveals to us. There is a plan and purpose to each and every one of these signs. Each one reveals something different to us about who Jesus is. They are way more than just, oh look what he can do with his magic hands! Meaning that they are more than just a revealing of his power, nor were they just to prove that he was divine. John wants us to go even deeper than that. These signs are a revealing of his heart, of his grace. 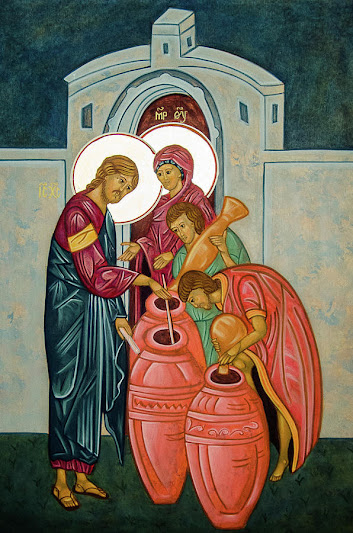 So, they’re enjoying this wedding, having a good time, and all of a sudden, Mary leans over to Jesus and says, “They ran out of wine.” Now at this point, it’s hard not to read a whole lot of stuff into the text, which is always a bad idea because these texts don’t come with any tone or inflections. But man is it hard not to imagine Jesus give his mom the look right here. The annoyed look that every son has given their mom all too often as he says, “Woman, what’s that got to do with me? My time hasn’t come yet.” And tell me you can’t see Mary give him the mom look! You know the one, the one that says, “I don’t know who you think you’re talking to but you can drop the sass. You are not too old to put over my knee!” Ok, maybe her look didn’t say all that but you know what I mean!

Now, there are a lot of scholarly opinions about this interaction between these two. From Jesus being down right disrespectful, which, to be fair, isn’t gonna be the only time Jesus is accused of that in this Gospel, to, Jesus was simply stating a fact. However, it is an odd way, even in that day, to address one’s mother, but an alternative view that I lean towards is that John here is highlighting Jesus’ relationship with God the creator. If Jesus was the Word made flesh, then all other relationships have to take a back seat, even that of his mother, as harsh as that may sound to us mortals. So, from that perspective, John’s perspective, Jesus’ words make much more sense to me, and I hope that helps you too. No matter how you hear it though, Mary has something very important to teach us here.

Two things in particular. The first is this. Jesus will except your invitation, no matter how mundane it may seem to you, Jesus will show up. This was no royal wedding that Jesus, the savior of the world, was invited to. This was no celebrity wedding that Jesus, the ruler of the cosmos, was invited to. This was just an everyday, average wedding, with average people. And Jesus took time out of his life to show up. And if Jesus could take time out of his life, mind you, he’s got really important things to do in the next three years! If Jesus could show up there, Jesus can certainly show up for you. Whether it’s a wedding, a funeral, a birthday, an anniversary, a surgery, a test, a date, an important meeting, a painful memory, or a troubling decision. You name it, Jesus will show up. Jesus will never ignore an invitation, because his momma didn’t raise him that way!

The other lesson that Mary has for us is this. Mary is the first person in this Gospel, to take a look at the world around her, identify a need, and direct Jesus to it. Whether or not he was going to act on it anyway is besides the point. Whether or not you think Mary gave him a motherly push into public ministry is neither here nor there. She saw a need, and directed Jesus to it. Period.