God of the Voiceless

Ron Valadez · God of the Voiceless

Well, talk about a huge jump in the overall narrative here! Ok, let’s get caught up a bit first. Last week we read the story of Jacob’s pillow. In a nutshell, Jacob, who’s name is changed to Israel, has lots of kids and in a series of many unfortunate events the family finds themselves in Egypt where they escape a devastating famine, thanks in large part to one of his sons, Joseph. In fact, Joseph becomes the ruler of Egypt, second only to the Pharoah himself. It’s a crazy story, most of which we’ve read in years one through three of the Narrative Lectionary. So the family is allowed to stay in Egypt, as a thank you to Joseph for his leadership, and that’s what they do. Israel’s kids have kids and their kids have kids, and on and on, and after a few hundred years have passed, this family has grown so huge that now Egypt is getting nervous.

Afraid that they might take over, they begin to treat these people very harshly, to keep them underfoot, to keep them in line. For a modern day example of this we needn’t look any further than the way the United States has treated, and continues to treat, black people. So, after years of such harsh treatment, Moses is born, and in another series of unfortunate events, one of which was the slaughter of every baby boy born to an Israelite woman, Moses is rescued and raised by an Egyptian woman, in the Pharoah’s own household no less. But Moses grows up knowing he wasn’t Egyptian, he didn’t look like them for one, and he saw how the Egyptians were treating his people, and he had finally had enough.

So one day he saw an Egyptian beating an Israelite, one of his own people. For a modern day example of this think the lynching of black people in our society. Yes, I said modern day lynchings. Remember Ahmaud Arbery? The 25 year old black man gunned down last year for jogging near his own neighborhood while black? Modern day lynching. But instead of pulling out his camera to catch this act on video, Moses takes matters into his own hands and kills the Egyptian. Moses is then forced to flee as a fugitive, and runs away to a place called Midian. He finds work as a shepherd, gets married, and that is where our story picks up today. Did I miss anything? Well, I skipped a lot too but that’s the Reader’s Digest version to get us caught up.

Now we come to the burning bush scene and what a scene it is! This is Moses’ call story. And before we go any further we have to come to the realization that each and every one of us has a call story. Call stories are not just for Biblical characters, nor are they just for those in professional ministry. Each and every one of you has a call story. Think of it this way, how would you explain to someone why you are a Christian? Why you go to church? Why you believe in God still? And it’s not enough to say that you grew up in church, is it! Because one, that’s cheating! And two, it’s never that simple!

Because if we’re honest, life, and sometimes a church, has given you plenty of reasons to never come back again, let alone give up on your faith in God. Why have you persisted? Why do you keep coming back? The answer to those questions is your call story! And the reason why it’s so important to come to that realization is because the Bible is littered with call stories and each and every one of them is written to be relatable to you and your call story. And this one is no different so let’s keep moving. 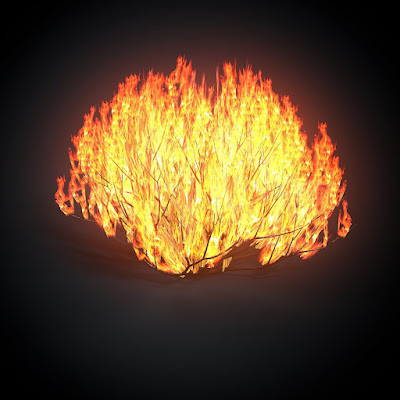 Moses sees a bush on fire but it is not burning up and so he goes to investigate a little closer. Then he hears the voice, and a most astonishing conversation ensued between Moses and God. As always, our job here is to keep God and God’s actions central. The question is always, what is God doing in this story. Focusing too much on the humans in a Bible story is gonna get us in trouble every time because humans will disappoint us ever time. But God is always a sure bet. And what I see God doing in this story is giving voice to the voiceless. And God starts with Moses. Upon hearing what God wants him to do, Moses objects. So there’s lesson number one: when God calls you, you are free to object! God didn’t smite him. But instead God continues the conversation.

And Moses tries everything to get out of this! First he says, “Who am I?” Meaning, I am no one! I am no one to my own people. And I am less than no one to the Egyptians because I’m a fugitive! In other words, he didn’t have the credentials for this! Well, that didn’t work so he then questions God’s own credentials! Who are you? He asks God. I don’t even know your name, let alone the Egyptians! Well, not only did that not work, but God gives him an answer that’s not really an answer! No Bible translation gets this very accurate. Ours says, I Am As I Am. And there’s lots of other versions of that but a more accurate translation would be, I will be who I will be. Well, that may be more accurate but I can’t say it’s a much better answer. Not very helpful God. But no matter, Moses moves on to his next excuse. I can’t speak.

Now, he could just be saying that he’s not a very good public speaker. Some scholars have suggested that he had a speech impediment of some kind. Either way, Moses knew that to do what God was asking, one would have to be a good speaker. So, now he thinks he’s got God trapped in a corner! There’s no way God is gonna wiggle outta this one! Clearly Moses doesn’t know who he’s talking to! Because we know there’s no one more wigglier than God! God says, ok, no problem, your brother Aaron can help you with that, and oh, by the way, he’s already on his way here! Moses probably thought, Dagnabbit! This God has thought of everything! And with that, God gave Moses a voice. God saw Moses, heard him out, and provided a voice for this voiceless shepherding fugitive. But God doesn’t stop there. Moses is merely a means to an end.

There are more voiceless ones in need. A lot of ‘em! And once again, God heard the cries of God’s people, God saw what was happening to them, and God was moved to act upon what God heard and saw, moved to give them a voice in the midst of so much violence and power, which is always a bad combination. You see, no matter the need, no matter how many are in need, they have to be seen first, they have to be heard first, before there is any hope of help arriving. People in need must be given a voice. God knew that. And so God sends Moses to them, to be their voice before the powerful pharaoh. You see the irony there, right? He sends the once voiceless, to help the voiceless. Coincidence? I think not. We are often called to do things that we have firsthand experience in.

So, here’s your homework, this week I invite you to think about your own call stories. How was God at work in your own call to follow Jesus? Through whom did God work to make that happen? What was your metaphorical burning bush? That is to say, what got your attention to hear God’s call? And this week I challenge you to come to the Wednesday Bible discussion and share a few of those stories with us! And now that I said that out loud I realize I probably just scared you all away from it!

But more importantly than any of that, because it’s not all about us, I’d invite you to ponder on who in our world needs a voice. Who needs someone sent to them to be their voice, to express their need, to advocate for them, and could that be us? And if so, what would that look like? We will be discussing that too on Wednesday. For our God is a God of the voiceless. Sometimes that’s us. And sometimes we get the opportunity and privilege to be called to give a voice to others, no matter how unqualified we think we may be. Thankfully, it is God’s credentials that really matter. Thanks be to God. Amen.