As you may have noticed, a lot has transpired in this biblical narrative since my last sermon, which was on the creation story. As usual, this is the thirty-thousand-foot flyby of the Hebrew scriptures so don’t be too put off by the fact that there will be large gaps in between stories. Here is what the trajectory will look like though. We started with one couple. We then took a wider lens and focused on one family, Sarah and Abraham’s family, where we are right now. We’ll then widen that a bit more and take a look at the nation that comes from the one family, Israel. That nation then gets scattered across the known world and by the time we get to our Christian scriptures, this year the Gospel of John, Jesus will then give us the widest lens possible when Jesus flings the door wide open on God’s unconditional love of all. So, that’s our trajectory in a nutshell.

Right now though, we’re still with this very dysfunctional family of Abraham and Sarah’s. A promise was given to them to not only have a child but for that child to be the start of an entire nation. As promises go, in that time and place, they don’t get much bigger than that! The promise of land and descendants as numerous as the stars? I mean, that was the promise to end all promises! God comes through and gives them their son Isaac, but not before a whole of deceit and taking matters into their own hands due to a lack of trust in God. Last week we then heard the story of God asking Abraham to sacrifice Isaac. Thankfully, God comes through and stops it just in time. And now that son is old with two kids of his own, Jacob and Esau. Those two as well were born out of a whole lot of deceit and betrayal surrounding the lives of Isaac and Rebekah.

Which brings us to today’s story, where we see Jacob and Rebekah steal the firstborn’s blessing away from Esau. Are you picking up a pattern in this family here? Lies, deceit, betrayal, theft, and I haven’t even mentioned that prejudice that comes out in their stories as well! These stories should be required reading in any course on dysfunctional families. It truly is a miracle that a nation was born from this family, let alone an entire religion! But let’s not get ahead of ourselves, in today’s reading the climax of this part of the story comes at the end, the good news comes at the end. But the backdrop of this story is the deception between Jacob and Rebekah and Esau and Isaac.

There are so many layers to this story that we don’t have time to even get into but the current deception is the stealing of the firstborn’s blessing. Old and blind, Isaac gets fooled into blessing his second-born, that which was meant for his firstborn. Now, you might be thinking, couldn’t Isaac have just reversed it, taken it back, set it right? Not according to ancient Jewish thinking. For them, words mattered. Once spoken, they could not be taken back. Once they left your mouth they took on a life of their own, a power of their own, no matter the consequences. I think we could learn a lot from our ancient siblings in the faith. Imagine if we took words so seriously. Imagine if we were so careful with our words. I could have written an entire sermon just on that! But I didn’t so we’ll move on.

Needless to say, Esau is beyond pissed about this! He’s seeing red! He’s on a warpath! So much so that he is planning on murdering his brother Esau! Not to give him any excuses because murder is always wrong but this is the last straw for him! This is not the first time that his brother has deceived him, has betrayed him, has stolen something from him. There has been a painful pattern of behavior between these two from day one, and Esau has had enough! Again, not an excuse to murder your brother but it’s not like this came out of nowhere! And Jacob knows that. He knows that. Which is why when his mom heard that Esau was looking to kill Jacob, she sent him away and he didn’t question it. He knew that this was the only way no one was gonna killed that day. And so did his momma. So, he ran. 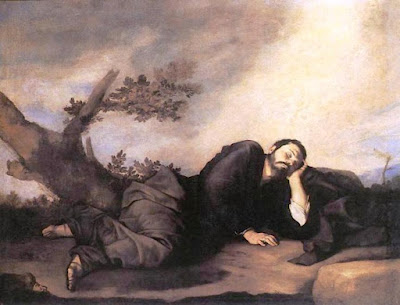 Which brings us to one of the most beautiful, and oft-overlooked scenes in Genesis. You’ve probably come to know this part of the story as Jacob’s Ladder. I’d argue that it’s been wrongly named. As amazing as the dream is that Jacob has about a ladder with angel’s going up and down it. That’s not the real gem of this story. If I got to name this story, I would have called it Jacob’s Pillow. Let me back up a bit. So, Jacob is on the run. He’s on his way to his momma’s family to hopefully wait until things calm down. That’s not exactly how things turned out but that’s for another sermon. He stops for the night in an unnamed place and he must not have left with very much. Maybe just the clothes on his back because when he lays down for the night to sleep, he has to use a rock as a pillow.

It’s then that he has this amazing dream of a ladder, but like I said, that’s not the highlight of this story. He wakes up and his whole disposition is changed. Because I imagine he went to sleep that night with a whole host of negative emotions. Fear, loneliness, guilt, shame, hopelessness, you name it. He had behaved horribly and to be honest, deserved to go to sleep that night feeling one or all of those emotions. And if he didn’t, then my goodness, he wasn’t human. But that’s what makes these stories so powerful, isn’t it? These are stories of humanity, with all our joys and flaws. It’s what makes them so relatable. We would be wise to remember that before we put these figures on such a high pedestal. But let’s keep moving. The climax of the story awaits.

He wakes up a new man, with a new vigor in his step. Why? Because his dream, as weird as it was, convinced him that God had not abandoned him. That as bad as his behavior was, God was still with him! Even out there, in the wilderness of his fleeing heart. This is the promise that God made with his father and his grandfather, and God was there to tell him that he had not screwed that up. The promise not only was still in effect but that God was with him wherever he ended up. And so what does Jacob do? He builds an altar with what was his pillow the night before and anoints it with oil. However, he still doesn’t quite get it. In typical human fashion, he’s still a bit clueless. Again, very relatable. He says, “Truly, God is in this place, and I never knew it! This is nothing less than the house of God; this is the gate of heaven!”

Now, who needs to hear this in our world today? Other than us, cuz lord knows we need reminded of this too, don’t we! Jacob had trouble coming to this conclusion on his own for a whole host of reasons. How do I know this? Listen to his words that immediately follow our reading: “Jacob then made this vow: ‘If you go with me and keep me safe on this journey which I am making, and give me bread to eat and clothes to wear, and if I return home safely to my parents’ house, you will be my God. This stone that I have set up as a memorial pillar will be a place of worship, and I promise to give back to you one-tenth of everything you give me.’” He just isn’t getting it is he! He has the gall to put conditions on his loyalty to God!? Are you kidding me, Jacob!

But this is all he’s known. Think of the family that he comes from! This is how they operate! There’s conditions on everything! Nothing is free! Everything they have they think they have to fight for, deceive for, even murder for! That’s the only way that he knows how to get something or how to give something. It’s all he’s known. So, don’t be too hard on him because he is us, right! We, as humans, have trouble with God’s unconditional love, whether that be in accepting it or sharing it, because that’s not how we work, is it! That goes against our grain! Especially for us American Christians! It’s not the American way! We’re taught that nothing in life is free! That you’re gonna have to fight for everything in life! Nobody’s gonna give you noth’n!

And this story, like so many other stories in the Hebrew scriptures, says no to all that nonsense. There is another way to live. And we, as followers of Christ, and these beautiful old stories, get to share that with others. We get to share that God goes with them, no matter what. No matter our behavior, no matter the place, no matter the time, no matter what stone we may choose for our head. When you were baptized, the pastor didn’t anoint a stone with oil, they didn’t anoint some beautiful font, they didn’t anoint the ground you or your parents were standing on, no that pastor anointed your head with oil, not because the place was special, not because the font was special, not because the water was special. But because you are special, and mean the world to God. God is here, because you are here, dear friends. I think we owe it to this world to share that, wherever they may be, whomever needs to hear it the most. Thanks be to God. Amen.