Ron Valadez · You Are Enough

The last time I preached we read about Moses’ call story and now we are already at King David? You know what that means! A little bit of catching up is in order. So, God’s people are rescued from the hands of the Egyptians of course. I’m sure you’ve all seen Charlton Heston do that a number of times. God’s people then find a new home but not after a very long journey to get there. The Ten Commandments are given. Lots of rules and regulations for worship and everyday life are given. Many battles ensued in order to take the land that they believed God had given them. Some have called that effort a holy war, others have called it genocide. It all depends on whether or not you were on the winning side of those battles. The land is then divided up among the twelve tribes based on the sons of Jacob, aka Israel.

Then they were left with figuring out how they were going to govern themselves. They came up with this system that we know as the time of the Judges. Basically, when there was a crisis, a leader was selected to handle the crisis. After the crisis was over, power was taken away from that person and life went back to normal, with each town’s elders taking care of minor day to day governing. Some well-known judges were Deborah, Gideon, and Samson. Well, this system only lasted for so long and the people started to ask for a king. They knew that all the other nations around them had a king and so they wanted one too. God resisted this idea for a long time, basically saying to them, I am enough for you. You don’t need a king. I’ve given you everything you need to succeed already.

And that’s the real key here. Because for a long time, well before the time of the judges, God’s people had been in a slow decline, not in numbers, but in following the ways of God that God had laid down for them. It was a slow moral and spiritual decline that they had succumbed to. And God knew that having a king was not the answer to the problem. But as we humans often are, they were their own worst enemy but hadn’t realized it yet. So, God finally gives in and says, fine, have your king, lets see how this plays out. So God calls Samuel, which we read last week, and he was going to be the one that God worked through to not only call Israel’s first two kings, but also to assist those first two kings in their ruling of the nation. He would become their moral compass so to speak.

Israel’s first king, Saul, let’s just say, didn’t go as planned. He was a maniac. And I mean that literally. Today he would have been diagnosed with some sort of psychopathy. Which brings us to today’s story, the call of David as Israel’s second king. This was Samuel’s attempt at a king 2.0, an attempt at correcting what he felt was his mistake in selecting Saul. So off goes Samuel to o little town of Bethlehem and finds a farmer by the name of Jesse. Jesse had eight sons and Samuel asks to see them. God said that from Jesse’s sons Samuel would find the next king. So Jesse brings him his sons and one by one, almost like a beauty pageant, each son is presented to Samuel to see if this was the one.

These sons that were presented to him were impressive, strapping young lads. Oddly enough, the firstborn is rejected immediately. So, we as the audience immediately know something is afoot here. The firstborn in that society had every right to expect to be chosen. But, as we all know, God is gonna do things God’s way. So, one by one, Samuel rejects each and every one of Jesse’s sons that is presented to him. Samuel was probably thinking, well, this is odd, God said it would be one of Jesse’s sons. Then he turns to Jesse and says, wait a sec, is this is all of your sons? Jesse says, well no, there’s also the youngest, David, but he’s out watching the sheep. Which tells us so much, doesn’t it. David is not only the youngest, but he must have been so unimpressive that Jesse didn’t even think to bring him! Can you even imagine being overlooked like that, from your own father? 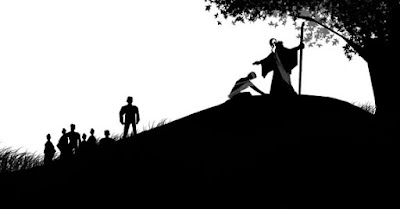 So, Samuel insists that David is brought to him and lo and behold, he is the one! As unremarkable as his family thought he was, this is the one that God chose. He may have been good-looking, as the author points out, but king-material he was not. And we really don’t know why. Maybe it was his size, his physique, his mannerisms, his intellect, some scholars have even pointed to his sexuality as the reason why he was overlooked. For whatever reason, his society deemed him as quite unremarkable, or at the very least, unkinglike. Now, why is this significant. You may remember me telling you a few weeks ago that the Bible was littered with call stories, and that each and every one of them was written to be relatable to you and your own call story.

Now, I could have ended the sermon right there and that would be a ton of grace, a ton of good news, a ton of gospel to leave you with, but I’m a pastor and sometimes I don’t know when to stop. Seriously though, I think there is even more grace, more good news, more gospel for us here—because we know how David’s life turns out! Samuel may have been looking for a new and improved king 2.0, a more reliable upgrade then the original model, but you and I know that’s not how it turned out. David turns out to be just as faulty as the original, and as any other king that they would have in the future. He turns out to be an idolater, a murderer, and a sexual predator. And God still called him, knowing how faulty he was gonna turn out to be.

Now, at this point we may be tempted to call into question God’s own judge of character but I think we’d miss the point then. That God can work with, can work through, anyone, no matter how faulty, in order to get God’s way in this world, and that way is the way of grace, love, and forgiveness. Because in spite of all of David’s faults, he becomes the ancestor of the long-awaited savior of the world, Jesus himself, the ultimate expression of God’s grace, love, and forgiveness.

So, not only can God see through to your heart, ignoring how the world may see you, and still call you, but God can even overlook your future misdeeds, and work with you, work through you, to bring about God’s grace, love, and forgiveness, that is oh so needed in our world. You cannot get in God’s way of that! God doesn’t have to wait for a new and improved 2.0 version of you! You are all God needs to work with. You are enough. Thanks be to God. Amen.