Did I Ever Tell You About the Day You Were Born?

Ron Valadez · Did I Ever Tell You About the Day You Were Born?

Today we begin the fourth and final year of the Narrative Lectionary. As always at this time of year we begin in Genesis and work our way through some of the most important stories of the Hebrew scriptures that we hadn’t read in previous years, leading up to the Gospel of John that we read through almost in its entirety starting on the fourth Sunday of Advent and ending at Easter. As many of you know, John is my least favorite Gospel. In spite of that, I’m looking forward to it and hope to gain a new appreciation for it. But right now we are in the book of Genesis and some of you might be wondering why it took until the final year of the Narrative Lectionary for us to read the beginning of Genesis! Well, there’s actually a logical reason for that.

The creators of this lectionary are very Christ-centered and so when they chose the stories that we’d read from the Hebrew scriptures each year they chose ones that would pair well with the particular Gospel that would be read that year. For instance, the opening lines of the Gospel of John are, “In the beginning was the Word and the Word was with God and the Word was God. The Word was with God in the beginning. Everything came into being through the Word, and without the Word nothing came into being. What came into being through the Word was life, and the life was the light for all people.” Now, what better Hebrew text to pair with that than the first chapter of Genesis! So, that’s why it took so long for us to read this particular story.

I had a real hard time narrowing down what I wanted to share with you about this ancient story. On the surface, it seems like such a simple story but trust me when I say, this story has layers upon layers of meaning, as well as a plethora of interesting little tidbits of Bible trivia. It really was a difficult task to pick what I wanted to share with you. Being the Bible nerd that I am, I constantly have to remind myself that what’s fascinating to me might not be fascinating to everyone else. But it boiled down to this, I had to ask myself what I perceive God wanting you to hear, in this place and time. And once I ask myself that, direction seems to become very clear very fast. Because to be honest with you, God is not a Bible nerd. God is and will always be more interested in your well-being than anything else, including the Bible.

Ok, so I’m not sure if you’ve picked up on this pattern in my preaching but I often begin with the good news of the text at hand and then end by challenging you with something. I don’t always do that intentionally, that’s just the way it turns out often. And by the way, I know that I challenge you pretty strongly, don’t think that gets lost on me. I know I stretch you near the breaking point sometimes, and I love you and thank you for not giving up, for sticking with me on this journey we’ve been on for five years now together. And believe me when I say, not every pastor can say that. I hear pastors all the time say things like, “Oh, I could never say that in a sermon!” Or, “If I talked about that subject in they’d leave me!” Suffice to say, this is one of the many reasons I am proud to be your pastor.

Today, however, I’m gonna challenge you first and then end with the good news. Now we obviously don’t have time to take this story verse by verse, we’ll do more of that on Wednesday evening so I hope you’ll join us for that. But as far as what this story challenges us with, I’ll share three insights that stood out to me. The first one is that we humans are not the end-all be-all of creation. For too long humans have taken this story to mean that we are God’s ultimate creation, the shining jewel of all that God accomplished on those seven days, as if it was a trial and error kind of week for God and finally at the end God got it right with us!

Now, here’s the reality, did you notice that we humans didn’t even get our own day during that week? You know, I’ve heard this story a million times and I don’t think I ever noticed that. But we humans were created on the same day that the rest of the Earth’s beasts and creepy crawly things were. So there’s clue number one that we humans aren’t quite as special as we’d like to believe we are.

The second insight that challenges us here is this, humans being created in the image of God. Now, what the image of God actually means we can talk about on Wednesday evening but it certainly means more than physical characteristics. For today, it’s enough to recognize that the author is not just pointing out the image of God in ourselves, but in everyone else around us. Thereby being a call to first see, with our eyes, the honor and dignity in every human being on the face of the planet that has ever lived and will ever live. And I don’t have to tell you that this has not been the case and still isn’t. We still have people in our world fighting to be recognized as fully human with all the rights and privileges and respect that should go without saying. Ok, insight number three is gonna tie those first two together. And then we gotta move on to the good news I promised you!

Creation was not made for us, we were made for creation. More specifically, creation was not made to serve us, we were made to serve creation. We humans are the only ones that were given a job during those six days. And the job was to be stewards of everything else that was created, to be caretakers of the rest of creation, and that includes everything: other humans, other animals, cuz that’s all we are at the end of the day right, a bunch of filthy animals, plants, trees, waterways, air, oceans, insects, you name it, we were ordered to be caretakers of creation, from our very first day of existence. Now, how are we doing with that job? I’m not even gonna make you answer that, but as theologian Kathleen O’Connor puts it, “We cannot survive if we do not live in harmony with the world around us.”

Now for the good news. And I’ll start with a personal story. I am my father’s only child. He had me relatively late in life at the age of 30. Like most parents, his parents couldn’t wait to meet their first grandchild. Unfortunately, when my mom was five months pregnant with me, Grandma Valadez died. Now, in spite of that being a sad story, it has oddly been a story of comfort for me. And it took me a while this week to figure out how to articulate this but I think it’s because, other then the blood we share, that’s my only connection story that I have with Grandma Valadez. And the thought that she was eagerly awaiting my arrival, and loved me as only a grandma can in spite of never meeting me, has brought me comfort every time I have heard that story over the course of my life.

Now, why am I sharing that? Birth stories, or in my case, pregnancy stories, can often be a source of comfort for us. And that’s exactly what this story was for God’s people when it was first written down. In spite of the fact that this is the first book in our Bible, it was not the first to be written, far from in fact. This was written during the end or just after the trauma of the Babylonian exile, when Persia had taken over and began to allow them to return home and rebuild their lives. Talk about a time when they needed some comfort. And the author chose to do that by telling them the story of their birth. It was the author’s way of holding them in their arms and saying, “Did I ever tell you about the day you were born?” It’s a story the helped to reground them in God’s love, to reconnect them to the God of the universe that seemed so far away to them at the time.

This may seem like a stretch but there’s a beautiful moment in one of my favorite scary movies that I think speaks very well to this. The movie is called Signs, and in the scenes that I’m about to show you, there’s a family of a dad, his two kids, and his brother. The mom has since died and there’s something outside their house that’s trying to get inside to get them and so they’re frantically boarding up the windows to try and keep it out. Don’t worry, there’s nothing that will scare you in these scenes. Roll the tape… 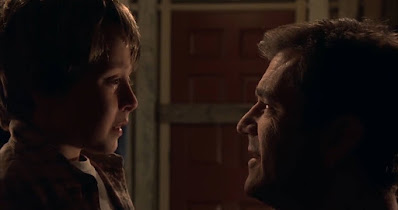 Birth stories can be such a powerful source of comfort for us. Whether they be our own birth stories, or children’s birth stories, or even birth stories that didn’t turn out the way we’d hoped. I’d invite you this week to ponder those stories in your own life and in the lives of your loved ones. When’s the last time you shared one? When’s the last time you asked someone, “Did I ever tell you about the day you were born?” Or, “Have I ever told you about the day I was born?” I encourage you to ask those questions, and share those stories—because in those stories we find hope, we find strength, we find perseverance, and we find comfort for the days ahead. Thanks be to our creator, who loves to ask us just when we need it the most, “Did I ever tell you about the day you were born?”
Email ThisBlogThis!Share to TwitterShare to FacebookShare to Pinterest
Labels: birth, comfort, creation, dignity, exile, genesis, hebrews, honor, humans, image of god, israelites, movie, narrative lectionary, others, sermon, signs, stories