There’s nothing worse than disappointing a family member or friend. Getting into a curse-laden argument is often much preferred than them telling you just how disappointed in you they are. And sometimes that disappointment isn’t even given in words, just a look, an expression is all it can take. An expression that hits right in your heart. Heck, I’d rather get into an all-out fistfight than be looked at with those disappointed eyes! I have a feeling most of you know that look. There’s just nothing worse than disappointing a family member or friend. It’s gotta be one of the worst feelings in the world. I’m sure I have disappointed my parents more times than I realize. I had a tendency of trying their patience. But you know, I never felt that they loved me any less for it, and I certainly wasn’t any less spoiled by them. Thankfully, there was no correlation between my bad behavior and their love for me or their willingness to do good for me. 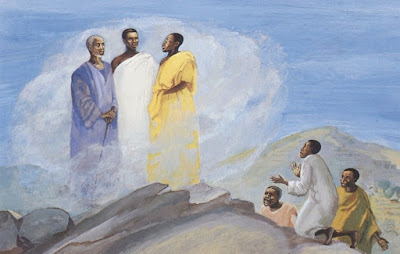 As we speed through the Gospel of Luke, we find ourselves in chapter nine already this week, and Jesus is really struggling here. We’re not even halfway through this book and Jesus is running low on patience, which is starting to cause some angry outbursts, and though Luke doesn’t use this word, I’m thinking that Jesus was throwing quite a few of those disappointed eyes at people. But before we get into Jesus’ moodiness, Luke shares this fantastical story of the Transfiguration. The Bible is full of lots of amazing stories but then there are some that seem they were written for the big screen and this is one of them. This scene feels like it was written more by a C. S. Lewis or J. R. R. Tolkien kind of author! 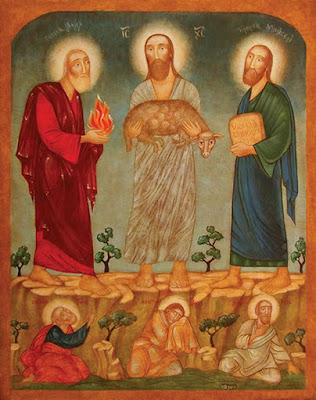 This story represents a major turning point in the narrative that Luke is sharing with us. From here on out, Jesus’ focus will become more and more set on Jerusalem and what is eventually going to happen there, him being handed over to his enemies. This is going to be a permanent fixture in his mind from here on out, and so it is no wonder that his temperament is going to change as well. He can’t even get a break from this during this mountain top experience with Moses and Elijah. Did you notice what they talk to him about? His departure, as Luke puts it! Can you imagine, getting to speak to Moses and Elijah, two giants of their faith, and all they want to talk to him about is his death! That would be like one of us, getting to meet Jesus, while we’re still alive, not on our death bed, and we say, “Jesus, I have so many questions for you, so many things I want to talk about!” And Jesus says, “I’m just here to talk about your funeral arrangements.”

As if that wasn’t bad enough, while Moses and Elijah are talking to him about his death in Jerusalem, Jesus looks over and sees his three closest companions, Peter, John, and James, fighting sleep! Some support team they turned out to be! Jesus just can’t get a break. Luckily, they’re able to stay awake long enough to hear a voice from the cloud say, “This is my son, my chosen one. Listen to him!” After witnessing this spectacular event, the four of them go back down the mountain and resume the road that they had been on, with the destination of Jerusalem now being set firmly. 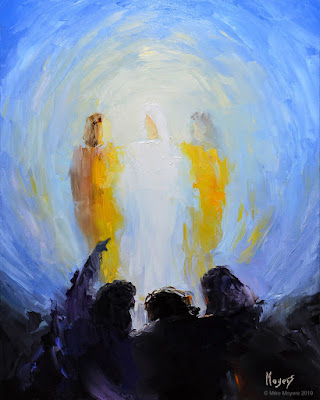 Now, let me pause here and ask you, if you had been one of the three that went up that mountain with Jesus, and witnessed all that they had, what would your faith be like as you now came down that mountain? What would your thoughts be surrounding this Jesus whose mission you have committed your life to? I know, it’s difficult to know what we would do in a situation like this but humor me and be thinking about that as we continue.

A day later, Jesus is confronted by a father with a sick son. His father thinks it’s a demon but any modern reader would read this and see that this was probably seizures that the son was suffering from, probably in the form of epilepsy. Regardless, it doesn’t matter what the son was ailing from as that doesn’t change the story at all either way. What’s important here is that the father was not just there to ask Jesus for help but to also let Jesus know that his own disciples had already been asked and were unable to heal the boy. Jesus flips out! Not on the father, not on the crowds, no, on the disciples. Now, we might read this and think Jesus is just in a bad mood and is therefore overreacting. However, we only read a portion of this chapter. If we had read from the beginning we would have read this very first line from chapter nine where Luke shares this with us, “Jesus called the Twelve together and he gave them power and authority over all demons and to heal sicknesses.”

He gave them the power to take care of that father’s son, from whatever that ailed him, and they could not do it. And we have to ask ourselves, why? Jesus gave us a clue in his little rant. He called them “faithless.” And I’m sure he had that disappointed look on his face that probably felt like a dagger to their hearts. Ugh, there’s just nothing worse than disappointing someone. I’ve mentioned this to you before but it’s worth a reminder. The Greek word that we usually translate as “faith” can equally be translated as trust. I actually like that word better. Mostly because we have a very westernized view of faith. When we think of the word faith we think of a certain set of beliefs that a person has. It’s a very doctrinal way of thinking of faith. However, that’s not what a first-century, Middle-Eastern view would be. For them, it was more of a sense of trust. Jesus was continually frustrated at their lack of trust, not in their inability to subscribe to a particular set of beliefs.

So, with that in mind, Jesus is actually calling them “trustless”, not “faithless.” Trustless. After everything that they had seen and heard, with their own eyes and ears, they were still having trust issues. And that was why they couldn’t help that father’s son. But these trust issues ran two ways. First and foremost, they didn’t trust Jesus. And without trust in Jesus, we end up trying to follow Jesus in the clouds like birds with their wings clipped. It just doesn’t work. So, there’s that, lack of trust in Jesus. But I also think there’s another lack of trust that Jesus is concerned about. And that’s a lack of trust in ourselves, in our own God-given abilities, in our own God-given gifts, given to us to carry out the mission set out for us two thousand years ago—to bring healing to the world, wherever and whenever we can, to whatever ailments that come our way. And so, beneath Jesus’ frustration and harsh words—which by the way, I find so endearing and full of grace, especially when I lose patience and grace myself—beneath Jesus’ frustration and harshness, we hear a call from Jesus, a plea from Jesus, “Trust me”, Jesus says, “And trust yourselves.” And more importantly, I hear Jesus saying to us, “I trust you. You got this. I have faith in you.”

Now, if that isn’t enough grace for you, it gets even better. When Jesus learns of the failure of the disciples to help that father, what does he do? Does he quit? Of course not. Does he fire the disciples? No. Does he throw a tantrum? Well, a little. What does he do next? He healed that boy. Because Christ would never allow our failures, our shortcomings, our lack of trust, to get in the way of God’s goodness breaking through our world. Never. Thankfully, there is no correlation between our behavior and Christ’s love or willingness to do good, to bring healing, to bring life, to bring wholeness, into our world. Nothing can get in the way of that. Not even us. Thanks be to God. Amen.