What Should We Do?

Ron Valadez · What Should We Do?

As I write this sermon, it is the morning after insurrectionists stormed and invaded the capitol building of our nation. It was one of the most horrifying sites I have ever watched on television. It’s right up there with 9/11 and every police brutality caught on video. Just when we think we’d seen it all, especially after a year like 2020, we witness our very own capitol be overrun by homegrown terrorists, the very place where we lay our most cherished hopes and dreams for this great nation of ours, the very place where we believe that positive change must come from—desecrated. The news doesn’t often bring tears to my eyes, and I know that’s probably hard to believe cuz y’all know how big of a cry baby I am, but yesterday I was surprised at how quickly tears came as I watched the first images appear on my screen of the mob reaching the senate chamber, and then treating it as if it was their living room, or worse, ransacking it. 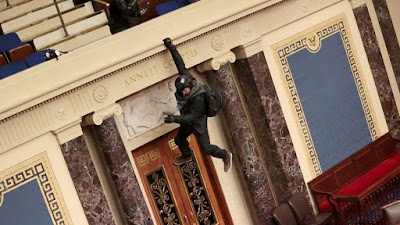 There was an image that really hit home for me like a punch to the gut, and I’m not entirely sure why, to be honest, I’m still trying to process all of this, which is probably not the best time to write a sermon but whatcha gonna do. Anyway, it’s this photo of a manchild hanging from a wall in the Senate chamber. When I first saw it, I was utterly disgusted at the disrespect being demonstrated. As I listened to the commentators on the news reflect on what they were seeing, I noticed some interesting words being used, words like desecrate, profane, and defile. Words often used in religious contexts. I found that interesting because, one, those words came to my mind as well, and two, it caused me to question if those were indeed the right words to be using. It caused me to ask myself, what is holy to me? What is sacred? Because my initial reaction to that manchild hanging from that wall was as if he was hanging from the cross in our sanctuary and I have to ask myself if that is the appropriate reaction, and continue to ask myself, what is holy? What is sacred? 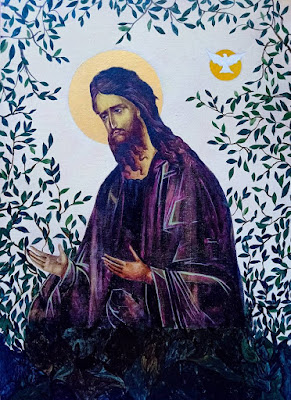 Let us allow that to simmer a bit while we turn to our Bible story that we have before us today. I’m not sure if you could have selected a better story after a week like this past week if I had chosen it myself! The passage centers around the baptismal ministry of John the Baptist, with Jesus’ own baptism only occurring in the final two verses, almost as if it’s a footnote to this story. The real star of this show seems to be John, or more precisely, John’s ministry, or even more precisely than that, God’s ministry through John. We don’t know a whole lot about John really. We don’t know what transpired in his life from the last time we saw him, leaping within Elizabeth’s womb when Mary visited, to this moment in his adult life. However, in this passage, we get to know him, we get to know what makes him tick. And we also find out why God chose Elizabeth and Zechariah to be his parents, because what they taught him while they raised him, really shines through in this story.

The story begins with John baptizing people in the Jordan River area, and Luke points out that these baptisms were being done as a sign that the baptized were changing their hearts and lives, and wanted God to forgive their sins. These baptisms weren’t for show. And these baptisms, as a professor once taught me, weren’t fire insurance. Meaning, they weren’t intended to keep people out of the fires of hell, or at least not the way that many have believed in the past. They were an outward sign of what was happening within: a changing of their hearts and lives, with a desire to move beyond their troubled past and forward with God. But what does that look like? I mean, it’s one thing to stand on a riverbank and yell, “Repent! Change your hearts and lives! Seek forgiveness!” But what does that even mean? Again, what does that look like?

That’s when something really interesting happens in the story. Three groups of people show up that quite honestly, surprise John. The first group we’ll call the haves, as in, the “haves and the have-nots.” These were the haves. The second group were tax collectors. And the third group were soldiers. If this story were written today, these groups would probably be the rich, the dishonest businessmen, and the police, because the military was used more like a police force in that day, especially in Roman ruled Judea. Each one of these groups asks the same question, and it’s a question that, after the events at the capitol yesterday, many of us are asking, “What should we do?” When these three groups stroll into John’s baptismal gathering, he gives them a stern lesson on what these baptisms mean, almost as a warning, so that they know what they are getting themselves into. Again, John wants them to know in no uncertain terms, that these baptisms are not for show, this isn’t some kind of production, this ain’t no magic show, and this certainly ain’t no tent revival! What’s happening at these baptisms is real, it’s changing people! And John questions whether these three groups are really ready for this.

And so, in response, each group asks, “What should we do?” In other words, what do we need to do, knowing who we are and what we do, to prove to you that we are ready for this baptism, that we in fact are changing our hearts and lives and want to put our troubled pasts behind us and move forward with your God, John!” His answer to each of them is beautifully, no masterfully simple. In typical John fashion, he doesn’t hold back and hits them where it hurts, plucks their most sensitive nerve. To the haves he says, share what you have with those that don’t. To the tax collectors he says, don’t take more than you're supposed to from people. In other words, just do your job and nothing more. And to the soldiers he says, treat people fairly, don’t harass, and be satisfied with your paycheck. Which is another version of, just do your job and nothing more.

This is some pretty profound stuff here! Notice that none of his answers to them are overtly religious in nature! Sharing, not stealing, being fair, not harassing, going home satisfied with your compensation, this sounds more like a meeting with the HR department! Notice also that he doesn’t say they have to leave their jobs, or become poor themselves. He also doesn’t say things like pray more or worship more or read their Bibles more! None of that. Just go and be decent people for crying out loud! Because in a world filled with indecent people, that’s how the world will know that your baptism is working, that your God is not a fake, and more importantly, that our God is the source of grace and mercy in a world that seems to be lacking.

Which brings us back to where we started, at the capitol on Wednesday, when many of us were asking something like the crowds from our story asked, “What should we do?” What can we do? How can we respond? If we were to ask this question of John the Baptist, our resident teacher for today, I believe he’d respond with something like, “Remember your baptisms.”  Remember your baptisms, is what I think his advice would be, and sound advice it is. It another way of saying, return to the core of who you are. And as baptized Lutheran Christians, the core of who we are is Christ. And if our core is Christ then we are called to live out our baptisms to the best of our ability, knowing that we will often falter in that endeavor and will continually need to fall on the mercies of Christ. But the mercies of Christ do not allow us to give in, do not allow us to surrender to sin, but rather the mercies of Christ call us to persevere in the eternal fight against sin.

What does that look like? Well, remembering John the Baptist’s teaching is a great place to start! Being generous with our sharing. Treating people with equity. Fulfilling our various vocations selflessly. I mean, imagine a world where we all just did those three things! And we haven’t even gotten to Jesus’ teachings yet! Return to our baptisms. Return to the core of who we are. That can be our response to the horrific events at the capitol. Because at the end of the day the core of who we are is not a flag, it’s not a person who holds public office, it’s not a political persuasion, it’s not the constitution, it’s not the Bible, it’s not a church building, and it’s not a federal building. It’s Christ. Christ is who we hold sacred. The ways of Christ are what we proclaim as holy. Thanks be to God. Amen.