This week is a busy week! There is so much going on in the world. Tomorrow is Martin Luther King Jr. Day, which couldn’t come at a better time as our nation seeks to come together in unity and repair the damage done by political extremists. Also this week the senate begins another impeachment trial, as if we needed another reason to glue our eyeballs to our screens. And on top of that, we will inaugurate our next president this week. Like I said, this is a busy week, with a lot on the line no matter what your political persuasion may be. Now, as many of you know, I don’t select the Bible readings that we use for worship. They are preselected years in advance in what is known as a lectionary. But as many as you also know, these readings sometimes come at the eeriest, most well placed times. Because today, as theologian Craig Koester pointed out, in the same week that we will hear the inaugural address of a new president, we read this Biblical story of Jesus’ own inaugural address according to the Gospel of Luke. Now, if that ain’t the work of the Holy Spirit I don’t know what is! But the timeliness of this story goes far beyond even that as we will see, so let’s dive in.

Our story begins with Luke telling us that Jesus returned to Galilee in the power of the Holy Spirit. Jesus sounds pretty pumped up and if you’re wondering why or where he went to since last week’s story you’ll have to back up a bit to a portion of the chapter that we skipped. You see, just before the story that we just read, Jesus went to the wilderness for forty days of temptation. So, after passing that test with flying colors, he is riding a bit of a high and who could blame him. This is the power of the Spirit that Luke is referring to and this is the frame of mind that Jesus is in as we read this story. Let’s just say that Jesus is feeling quite confident. So, like the good boy that Mary and Joseph raised, Jesus goes to temple on that Sabbath, and he gets chosen as the day’s lector, the one who gets the high honor of reading the scripture for the day. Now, I don’t know if it was a preselected text or not but the text that Jesus reads is a doozie, and his commentary on it was nothing short of jaw-dropping for them I’m sure. 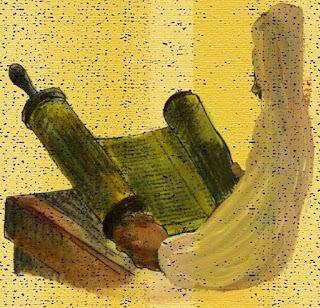 Jesus reads from a passage of Isaiah known as Third Isaiah. It’s the portion of Isaiah that scholars believe was written after the exile, after God’s people have returned from captivity and back to their homeland to pick up the pieces of their lives and rediscover who they are after such a devasting experience. This passage that Jesus read was the author's attempt to give God’s people hope for the future while the chips were down for them, while they were at the lowest point in their lives. As a side note, this is why a basic understanding of the Hebrew scriptures is so necessary to get the most of the Gospels, which is why I love the Narrative Lectionary that we use. So, it’s with all this in mind that Jesus addresses the temple worshipers, his first audience, with this hopeful passage from Isaiah. Now, let’s pause there and remind ourselves of the context here. First, just like a new president’s inaugural address, Jesus here lays out what he plans to do. Second, typically an inaugural address tries to unite, not divide, even if the sole purpose of that unity is to help gain followers and support to move forward on the intended agenda, often promising to throw a bone even to the opponents.

This is where Jesus strays from a typical inaugural address. Not only is his address divisive, but it doesn’t even promise anything to the very people that could have helped raise Jesus to greater power and influence. Oh, it’s full of promises! Jesus promises good news and rescue and health and liberation, all great promises to make in an inaugural address but who does he make these promises to? The poor. The captives. The blind. The oppressed. Not only are these groups of people on the fringe of society, but they are people who have no power, no influence, no ability to make Jesus’ mission any more effective, let alone any resources to support his agenda. From a political perspective, this should be required reading for what not to say in an inaugural address. But as we all know, Jesus was no politician. He would have been impeached in his first year! Because Jesus was clearly not here to make friends in high places, he was here to do work. And the work that he had planned, and by the way the work that Christ is still engaged in, is the work of social justice and equity for all—and that is rarely going to earn you any popularity points, then—or now.

I imagine there were a lot of people scratching their heads after Jesus read this scripture passage and said that this was what he planned to do, that this was who he was about. I imagine there were some that were trying to figure it all out, maybe thinking that Jesus was still talking about them, that this good news was for them. So, Jesus reminds them of two stories, two stories that we have read since starting the Narrative Lectionary over two years ago. The first one he mentions we read just a few months ago, the story of the widow from Zarephath. Remember that one? It was the story of the widow and her son that were about to eat the last of their food and die of starvation. Great story but guess who the people of Zarephath were? Outsiders! Gentiles! Not who they considered to be God’s people! Jesus tells them that there were many Jewish widows in need but God chose to rescue an outsider! Next, Jesus mentions the story of General Naaman, which we read a couple years ago. Naaman was healed of a skin disease by washing in the Jordan River as Elijah instructed him. Guess where Naaman was from? Syria! Also, an outsider! A Gentile! Not who they considered to be God’s people! And Jesus, once again, reminds them that there were many Jewish people with skin diseases but God chose to heal an outsider.

Why did God do these things back then? Because God’s people wouldn’t. Because God’s people continued to ignore the very people that God had intended them to care for: widows, orphans, the poor, the sick, and immigrants seeking refuge. And guess what, Jesus says, you still aren’t, so here I am to continue God’s work that you should all have been doing anyway. As expected, they were furious! And they ran him out of town like a dirty salesman selling snake oil. But all Jesus wanted to do was give out grace to those who needed it most. And so, off he went, into the sunset to do just that, in as many other cities as he could get to. Leaving many enemies behind along the way.

It's a story that examines some of our most basic human behaviors and puts them under a spotlight. Even when offered a gift like grace and mercy, freely given, humans have a tendency to make it all about themselves, even to the point of hoarding these gifts from God, meaning we expect that all of them are for us. The people who threw Jesus out of town were furious because they realized that Jesus wasn’t including them. And Jesus wasn’t including them because they weren’t poor, they weren’t prisoners, they weren’t blind, and they weren’t being oppressed. In other words, they had already received God’s blessings but could not even acknowledge that, and they ended up throwing the savior of the cosmos out of town.

This story is not only a call to continue Christ’s work of justice in this very lopsided world we live in, but it’s also a warning to Christ’s followers. I believe that Luke is warning anyone who chooses to follow Christ, that the ways of Christ will not be a very popular road. In fact, it’s gonna make you some enemies. Just ask any church that has cast away it’s judgmental theologies against the LGBTQ community and made the decision to welcome them fully, out loud, in writing, and God forbid display a rainbow flag! Every single one of those churches can tell you stories of the enemies that made and the members that they lost. 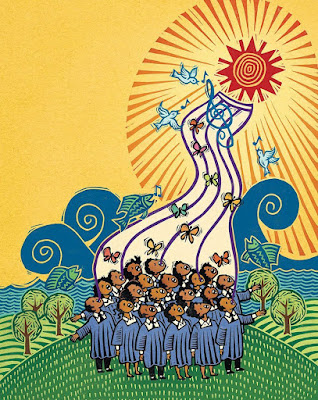 Tomorrow is Martin Luther King Jr. Day. For me and many others around our nation, it’s a day for us to remember the journey our country has been on toward the work of equality, how far we have come, and how far we have yet to go. Our next hymn has come to be known as the black national anthem. First written as a poem by civil rights leader James Weldon Johnson at the turn of the last century for the celebration of Abraham Lincoln’s birthday, it was later set to music by his brother J. Rosamond Johnson. It has been included in Lutheran hymnals since 1978. The rendition that you are about to see and hear is from a Stanford University acapella group. The video has some commentary at the beginning before the hymn is actually sung. My first instinct was to cut the commentary out and just give you the hymn. Why? Because they mention Black Lives Matter and I thought that would be too controversial and offend some people. But now that I have finished writing this sermon, it would be quite disingenuous to do that and so I’ve decided to leave it in. And if I lose some popularity points by doing so, well, I’ll rest easy knowing I’m in good company. Thanks be to God. Amen.