The opening words of the book of Daniel read like this, “In the third year of the rule of Judah’s King Jehoiakim, Babylon’s King Nebuchadnezzar came to Jerusalem and attacked it.” And so begins the long and treacherous years of exile for God’s people—exiled from all that they held dear: home, land, freedom, worship, all the identifying markers of what made them who they were, in their eyes. Even worse was the haunting question of where God was in all of this, if God was anywhere? Have you ever wondered that? I hope not, meaning I hope that you have not found yourself in a life situation that has caused that question to arise. Unfortunately, I know better, and know that many of us have indeed found ourselves in circumstances that abandoned us wondering where God is. It’s a tough place to be in. Which is why I love this story so much, because of when it was given to God’s people originally, during a time of great need, which is also why I love this story for us right now.

So, just to give you a little backstory on how Daniel got to this point of his story; Daniel had served under a number of kings, earning the respect of all of them. The respect was shown by putting Daniel in higher and higher positions of power and influence over the years, in spite of his Hebrew blood, a people that they had conquered. Along the way there are a few notable stories: the story of The Fiery Furnace as well as the story where the saying, “The writing on the wall” comes from. By the time we get to chapter six, which is where our story for today comes from, Daniel has been placed as third in command in the kingdom by King Belshazzar. Upon Belshazzar’s death, Darius becomes king and is about to make Daniel second in command and that’s where we jump into the story. If you hadn’t made the connection by now, it reminds me a lot of the Joseph story and how he was placed in positions of power everywhere he went, in spite of being a foreigner.

As often happens, when foreigners, or outsiders of any kind, come into power, those around them, especially those who consider themselves insiders, the powerful majority, get their knickers in a knot and do everything they can to keep them from gaining any more power, going to great lengths, even sabotage. This is exactly what happens to Daniel. Those up for the same position around him go looking for Daniel’s mistakes so they can point them out to the king, but they come up empty. Have you ever been in a position like that? When people around you have tried to sabotage you? Maybe they were jealous coworkers, jealous family members, maybe even jealous church members! Gasp! Not in the church! Heaven’s no! Sometimes, no matter how much you try to mind your own business, work hard, keep your nose clean, do good work, be a good person, someone inevitably wants to rain in your parade. That’s where Daniel finds himself. 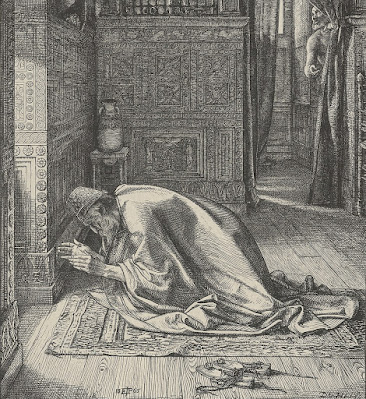 As hard as they tried, they couldn’t find anything to use against him. So they do what so many do when they’re out of options, the making something up! They make up some law about praying, designed to target Daniel, the outsider, the foreigner, the minority in all of this. Seems as though that game has been played for a long time, hasn’t it! The law that they make up said that anyone who prays to anyone other than the Babylonian king was to be put to death. Oddly enough, the king agrees. Why? Because he was weak, too easily influenced by others, unwilling to stand his ground even when he knew something was wrong, he was a weak king. And Daniel, was just the opposite. Daniel was strong, Daniel was not easily influenced by others, and stood his ground even with powerful forces against him. Unfortunately for the king, this new law backfires on him because the guy he was about promote to second in command, Daniel, was arrested and sentenced to execution due to the bill he just signed into law. So Daniel gets thrown to the lions. However, all is not lost, it turns out the lions didn’t touch a hair on his head, and Daniel is released and allowed to prosper. 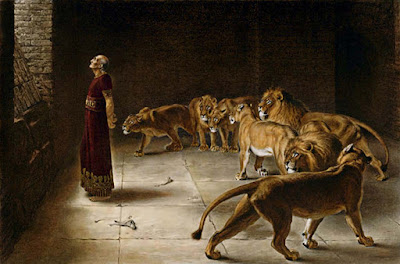 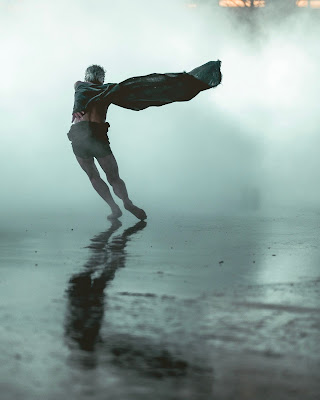 For they were a people who were on the brink of losing everything, not just their land and home and freedom but their culture, their religion, their God. They were on the brink of being erased from history or at the very least being reduced to a minor footnote in someone else’s historical narrative. And this beautiful story of Daniel comes along to tell them to stand their ground! All is not lost! God will find a way! God has not left you! Don’t lose yourselves in this exile! Don’t forget who you are! You are God’s beloved. You are God’s precious chosen; chosen to keep the ways of God alive and well, in spite of the predicaments you find yourselves, because of the predicaments you find yourselves in, making you too, heroes in your own right. It reminds me of David Bowie’s song Heroes, when he says, “We could be heroes, just for one day…What d’ya say?” He wrote that song about a couple who stood their ground in spite of one being on the East side and one being on the West side of the Berlin wall. I love the song because it highlights how all of us are called to be heroes, even in small ways, at particular points in our lives. It doesn’t take a cape or a mask or a lion’s den.

I can’t think of a better way to kick off Advent than with this story, especially during a pandemic. We need heroes now more than ever! And they are all around us, if you look for them. Doctors, nurses, first responders, to be sure. But maybe even more profound are the regular everyday folk who stay home unless they have to go out, everyday folk who wear a mask in spite of the inconvenience, everyday folk who check on their neighbor or fellow church member just to make sure they’re ok. There wasn’t anything particularly special about Daniel, other than he was good at what he did. He was just everyday folk, whose courage and integrity led him to do what was right, for the sake of his people. Sure sounds like someone else we know, doesn’t it! But that’s for another story! In the meantime, as we kick off this Advent season, I invite you to ponder the heroes from everyday folk in your lifetime. How have they sustained you along the way? How have they given you hope in times of hopelessness? Do they even know that they had that kind of impact on you? And while you’re pondering all of that, let me thank you for being the heroes that I know you are, even though you’d be the last to admit it. Thank you for keeping alive the ways of God. Thank you for passing on the ways of God—the source of all goodness and mercy and hope—needed now more than ever. Thanks be to God. Amen.