As we continue through the time of the prophets, let me give you a quick snapshot of where we are in the grand scheme of things. Life is quickly going from bad to worse for God’s people. Last week we read from Isaiah in the northern kingdom of Israel and at that time Isaiah was warning them that the end was near. It turns out he was right and the kingdom fell to the Assyrians and was never heard from again. Our story for today comes from Jeremiah whose ministry occurred in the southern kingdom of Judah approximately a hundred years after the fall of the northern kingdom. Since that time, the Babylonians conquered the Assyrians, because there’s always a bigger fish, so now they had control over the kingdom of Judah and had slowly been choking them out, so much so that all that was really left in the hands of God’s people was the capital city of Jerusalem. For a time they actually had a good king, king Josiah, who tried to follow God’s ways, only for his son, Jehoiakim to assume the throne and be one of the worst kings in all of Judah’s history. That’s where Jeremiah comes in.

Like Isaiah, poor Jeremiah has one of the toughest jobs of all of the prophets, having to be the prophet to walk with them through their death. Up til now, king Jehoiakim has been able to placate the Babylonian king by sending gold and slave labor but that will only last for so long. The Babylonian king is eventually gonna want to go and finish the job and take Jerusalem. But we’re getting ahead of ourselves, we’re not there yet. What Jeremiah has been doing is warning the people, trying to give them hope in a hopeless situation, but everyone can see the writing on the wall, their days are numbered. It’s certainly a strange place to be in. As someone who has pastored a congregation through their death I can tell you first hand of the limbo that those final years, those final months, weeks, can be. For Jeremiah this wasn’t the worst of it though. He also had to contend with a wicked king who tried to thwart his every move, silence his every word, finally putting him in prison, barring him from the temple. 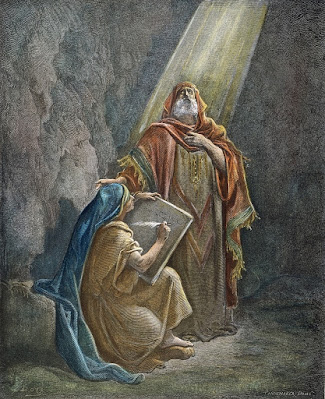 So, what is a prophet to do when his voice has been silenced? Become a writer! So with quill and scroll in hand, that’s exactly what he does! Jeremiah, with his trusty assistant Baruch, begins to write down all that God has told him to say to the people. Once completed, he tells Baruch to read it to the people in the temple, since he can’t go himself, and to do so on the busiest day in the temple. Baruch does as he’s asked, in spite of the fact that this very act could cost him his life as the king has killed for much lesser offenses. Once the king gets word of this, he sends his cronies to go get the scroll and bring it to him. When it finally arrives, the king is in his winter palace sitting by a fire to keep warm. I’m imagining this palace to be quite bare, a lonely, empty space that was once quite grand, furnished with the most expensive furnishings a king could have, especially this king whose ego, pride, and self-worth knew no bounds. But now, this once magnificent place is cold and bare and quite sad really, because you see, he’s sold everything the kingdom had to the Babylonian king. Sold it for more time on the throne, a throne that held little to no power anymore. And now there wasn’t anything left to sell, not even his soul. 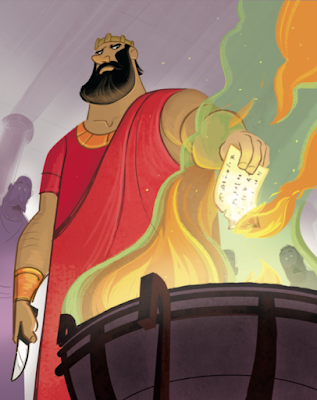 So, in what can only be described as the most childish act any of the kings in the Bible made, king Jehoiakim has the scroll read out loud to him, but, after every paragraph or so, he’d stop the reader, take a scribe's knife, which was basically a little pen or exacto knife. He takes the knife and cuts out the section that was just read, but he doesn’t stop there. He takes the piece that he just cut and throws it into his fire. Turns to the reader and motions for him to read another paragraph and then does it all over again until each paragraph has been individually cut out and thrown into the fire. Now, just imagine for a moment the kind of character this guy is. Childish only begins to describe him, if not altogether a megalomaniac!

Unfortunately for baby king Jehoiakim, God instructs Jeremiah to write another one, and so he does, with Baruch’s help. The funny part is that this baby king Jehoiakim get immortalized forever in the very scripture that he tried to destroy, leaving a legacy that his father Josiah would not have been proud of. I love this quote from Daniel Barrigan in his book on Jeremiah, The World, The Wound of God, he writes, “Despite his wintry fires and hot furies—we have in hand the scripture he sought to destroy…The king’s winter fire is long extinguished. In that fire, in a vain gesture, he sought immunity from judgment. Like his fire, like his vain assault on the word of God, the king too is all but extinguished—a near nobody, a petty tyrant, raving, wreaking, tempestuous. His fretful, childish gesture, futilely standing against God’s word, is a case in vain against the winds of truth. Pity him.” Ouch. Imagine that being the legacy you leave.

Our reading ends with a selection from the scroll that baby king Jehoiakim tried to destroy and it is arguably the most important passage in the entire Hebrew Bible, particularly as we look forward to reading from the Gospels once again at the end of Advent. It’s a great set up for the coming of the messiah, even if they couldn’t quite understand that when Jeremiah and Baruch first wrote that scroll. This is the real gem of our reading, in spite of what baby king Jehoiakim would have had you believe. For you see, the selection that we read from that scroll contains the new covenant, the new promise that God made with God’s people. This was a covenant like no other. It was groundbreaking, not just for the Hebrew religion but for any religion of the day, of any day! So what makes this new covenant so new? Well, in two ways in particular.

Any other covenant, especially one between a god and humans, was a two-way street. Meaning, both parties had to hold up their end of the bargain, both had responsibilities to uphold. The success of a covenant was dependent on this, conditional. Not so with this new covenant. This new covenant was not dependent on humans behaving, because, well, we know how those kinds of covenants ended up. This new covenant was overflowing with unconditional love from God for God’s people. And no one or no thing could get in the way of that. The other way this was new was that it was for everyone, “from the least of them to the greatest” as God put it. This was not going to be dependent on age or gender or status or holiness or anything! This really was a new covenant, a new kind of promise between God and God’s people. And it was needed then more than ever.

The last remaining stronghold of God’s people in the Promised Land was about to fall to the Babylonian Empire. They would be exiled, scattered, without a home, without a temple, without their God, or at least, that’s the way it was going to feel. And this message of Jeremiah’s of a new covenant would be the lifeline that would get them through this. Without it, they would have been left with the thought that their God had abandoned them due to their bad behavior, just like the gods of the other nations would do. But not our God, our God always finds a way to remain with us, to love us, to forgive us, over and over, no matter what. None of us know what’s ahead for us. We never know if our worst years are behind us or ahead of us. But what we do know is this, that God will be with you, by your side, through it all, and nothing, not even our bad behavior, could keep God from us. That is the new covenant, the new promise, that Jeremiah brings us this day, and that Jesus exemplified so beautifully. But that’s for another story. Thanks be to God. Amen.