We are the Dreamers of Dreams

“We are the music makers,

And we are the dreamers of dreams,

And sitting by desolate streams; —

On whom the pale moon gleams:

Yet we are the movers and shakers

Of the world for ever, it seems.”

Those are the opening lines of Arthur O'Shaughnessy’s nineteenth-century poem Ode. In it, O’Shaughnessy explores hopes and dreams, past, present and future, and our own agency in it all, or lack thereof. Not unlike our Bible story that we have today from the thirty-seventh chapter of Genesis. Since last week we have skipped quite a few chapters, too many for me to sum up in detail. We skipped the rest of Abram’s narrative, all of Isaac’s, and most of Jacob’s. Suffice it to say, what we’ve skipped is one dysfunctional family story after another. It’s probably why we love these characters so much and how they have stood the test of time for the past few millennia. They are indeed relatable. Today, we focus on Joseph and his relationship with his brothers.

There is a lot we could talk about from this story. The Joseph narrative takes up more of Genesis than any other narrative. We could talk about forgiveness, family systems, jealousy, betrayal, favoritism, just to name a few topics. However, what I’d like to focus on is the power of dreams. And when I say dreams, I could just as easily say hopes, as I don’t just mean the kinds of dreams that we have when we sleep, but also of what we dream of during our waking hours as well. The hopes and dreams that can just as quickly lead us to despair as they can perseverance. Though Joseph’s dreams came during his sleep, they were representative of something larger at work in his family, not to mention the entire region. But before we get ahead of ourselves, let’s take a closer look at the story itself.

The story gets kicked off with a dream that Joseph had in his sleep. When he shares this dream with his brothers, to them it sounds more like a nightmare. Because in Joseph’s dream, his brothers end up bowing down to Joseph. Now, this is significant because in the ancient world, being the first-born was everything! The first-born got the inheritance, became the new head of the household when the father dies. So, for Joseph to imply that things would actually be the reverse in their family, was nothing short of insulting at best. Insulting to his brothers, his father, to their very way of life! Now, we could go on about what or who was the real culprit here in the disintegration of Joseph’s relationship with his brothers, surely Jacob was not innocent either here, but it’s the dream that I want us to keep central—the perseverance of that dream, the enduring quality of that dream, the life-giving nature of that dream.

That is something that no one in that family was aware of. To them it was all about pride, inheritance, family, status, ego, you know, all that human stuff that get’s in the way of what the dream was really about—life. In their defense, they were human, and we humans often can’t see beyond the tips of our noses. But God can, and did, and so there were bigger things at work here than anyone could have imagined. Regardless of that fact, Joseph’s brothers were so incensed, that they succumb to murdering him. Upon further reflection, what ends up happening is that they sell him into slavery, and tell their father that wild animals must have eaten him. At this point in the story I imagine a whole new set of dreams begin, dreams of the other sort, the daydreams of a father who longs for his dead son, the daydreams of sons who long for days when they don’t have to look into their father’s broken-hearted eyes, the daydreams of a mother who longs for simpler times, the daydreams of Joseph who longs for freedom and family. Dreams from so much pain and brokenness, and yet, those are some of the most powerful dreams we have. 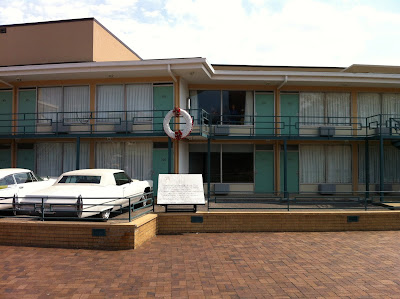 Outside the Lorraine Motel in Memphis, Tennessee, the site of the assassination of Dr. Martin Luther King Jr., there is a plaque commemorating the site which reads, “They said one to another, ‘Behold, here cometh the dreamer…let us slay him…and we shall see what becomes of his dreams.’” A direct quote from our story for today, and obviously a reference to his famous speech delivered on August 28th, 1963, at the Lincoln Memorial in Washington D.C.. It is in the middle of that speech when he begins to use the metaphor of a dream with these words, “I am not unmindful that some of you have come here out of great trials and tribulations. Some of you have come fresh from narrow jail cells. And some of you have come from areas where your quest for freedom left you battered by the storms of persecution and staggered by the winds of police brutality. You have been the veterans of creative suffering. Continue to work with the faith that unearned suffering is redemptive. Go back to Mississippi, go back to Alabama, go back to South Carolina, go back to Georgia, go back to Louisiana, go back to the slums and ghettos of our northern cities, knowing that somehow this situation can and will be changed. Let us not wallow in the valley of despair, I say to you today, my friends. And so even though we face the difficulties of today and tomorrow, I still have a dream.”

Unfortunately, Dr. King did not live long enough to see his dream become a reality. Neither have we for that matter. Regardless, the dream is still alive and just as powerful as ever, in spite of the pain and brokenness, in fact, because of the pain and brokenness that it springs from. Of course, Dr. King was not the only dreamer. So many in our history have dreamed dreams that have made an impact on our futures, whether they got to see their dreams become a reality or not. People like Stormé DeLarverie, Dorothy Day, or Harriet Tubman. Not to mention these Dreamers of our present day…

Thirteen chapters later, at the end of the book of Genesis, Jacob dies, and Joseph’s brothers are stricken with fear all over again. Since that time that they threw him in that pit and sold him into slavery, a famine hit and they had to go to Egypt for food only to find out that Joseph, in a series of extraordinary events, had become the ruler of Egypt, second only to Pharaoh himself. So, there they were, bowing before their brother, just like that dream of Joseph’s so many years before. Because of Joseph’s wise rule, Egypt was the only place in the region that had food to spare. And so, the life-giving dream becomes a reality right before their eyes. However, fearful that Joseph might want vengeance, especially now that their father is dead, they cry for mercy. Joseph responds with one of the most grace-filled words in the Bible, “Joseph said to them, “Don’t be afraid. Am I God? You planned something bad for me, but God produced something good from it, in order to save the lives of many people, just as he’s doing today. Now, don’t be afraid. I will take care of you and your children.” 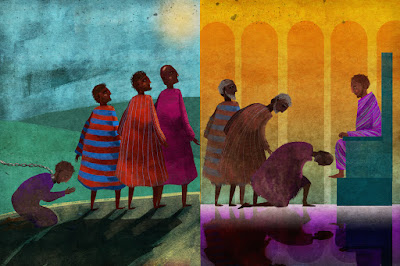 My friends, we live in perilous times filled with fear, anger, pain, and brokenness. But for the sake of so many dreamers who have gone before us, so many dreamers who stand among us, and for the dreamers yet to come, we cannot give up dreaming. I’d like to leave you now with the end of that poem I began with from Arthur O'Shaughnessy, as you continue to chew on this old story, as you continue to dream of the future.

“But we, with our dreaming and singing,

Ceaseless and sorrowless we!

The glory about us clinging

Of the glorious futures we see,

Our souls with high music ringing:

O men! it must ever be

That we dwell, in our dreaming and singing,

A little apart from ye.

For we are afar with the dawning

And the suns that are not yet high,

And out of the infinite morning

Intrepid you hear us cry —

How, spite of your human scorning,

Once more God's future draws nigh,

And already goes forth the warning

That ye of the past must die.

Great hail! we cry to the comers

From the dazzling unknown shore;

Bring us hither your sun and your summers;

And renew our world as of yore;

You shall teach us your song's new numbers,

And things that we dreamed not before:

Yea, in spite of a dreamer who slumbers,

And a singer who sings no more.”