So, we have finally come to the end of our journey with Job. I hope you have enjoyed this as much as I have. This really is a masterpiece of literature, but more than that, it is a profound, if not raw, account of life and death, and life anew. But before I say too much let us dive right in to the story! Last week we heard God lay into Job pretty hard! God did not hold back. The Wednesday evening Bible study gang agreed that I read it too kindly and should have really made God sound angry! However you read it, God spends three chapters reminding Job of his place in the cosmos, and then asks Job to respond, which is where jump back into the story today. Job does respond, albeit briefly. Because what can he say really, after the onslaught of questions that God just unleashed on him? Not much, but what he does say is quite telling, and beautifully hopeful if you ask me.

Job first acknowledges God’s omnipotence, always a good way to start a conversation with God, especially when you’re not sure of your standing with God at present! He then acknowledges his own limitations, his own lack of knowledge. Then he says two things that I found very meaningful, especially since he never really got an answer to any of his questions from God. First, Job said, “My ears had heard about you, but now my eyes have seen you.” The author never said that God appeared to Job. All the author said was that God answered Job from the whirlwind. And last week we said that even the whirlwind wasn’t literal but figurative, that it was the chaos that Job had experienced. So, what did Job see when he said he had seen God? The quick and easy answer is that this should be taken figuratively too but that still doesn’t answer the question, does it. What did Job see that made him feel like he had seen God?

I think this can be answered in two ways, first, we have to go back to the last three chapters, which include our readings from last week, those chapters when God was reminding Job of his place. In those chapters God takes Job on a tour of not only the world but of the cosmos, again, probably figuratively but that besides the point. Think of all the imagery from those chapters: the earth’s foundations and cornerstone; the morning stars singing; the divine beings shouting; the sea; the clouds; the waves; the dawn; the deep-sea; death’s gates; deep darkness; light; snow; hail; wind; canyons; thunder; desert; dewdrops; ice; various animals by name; heaven’s frost; celestial constellations, by name! Now, think about Job’s state of mind upon arrival back on his ash heap after getting a tour like that! If Job had thought that God was just this aloof heavenly being that wasn’t really concerned with what was going on down on creation, boy was he wrong! And I think he knew that now.

For the other answer to that question of what did Job see we have to look forward in this story. Job’s next line is, “Therefore, I relent and find comfort on dust and ashes.” After the tour to end all tours, Job returns to his ash heap, the constant reminder of all that he has been through. Only now, he has seen that God is present in every place, in every time. And if that’s true, that means that God has been present in that ash heap, the whole time! And that’s why Job can find comfort in, of all places, in the dust and ashes in which he sits. Job had learned that God is not only present when life is good, but also when life turns sour, and that he was making a lot of assumptions about God that he and his friends shouldn’t have been making. And speaking of the devils.

As we continue through this last chapter of Job, we find God speaking to Job’s friends and God doesn’t have much nice to say. God basically tells them all that they have been wrong, about everything, but God ends up forgiving them. The author then returns to the role of narrator and we find out that Job ends up having twice as many possessions that he began this story with. Not only that but he ended up having seven more sons and three more daughters, the same number as before. Then there’s a curious, seemingly insignificant detail that the narrator mentions. Job ended up giving an inheritance to not just his sons, but to his daughters as well. Wait, say that again? Yes, an inheritance to his daughters as well! That might not sound like a big deal to us but in Job’s day, that was unheard of! The only time a daughter got an inheritance was when there were no living sons left! What in the world is going on here?

I think this was the authors way of telling us, that when you live through tragedy, when you come out on the other side of death, literal or figurative, nothing is the same afterward. The things that were important before, maybe are not so important now. The priorities you had before, you realize need to be reevaluated. Even mundane things like who gets an inheritance, need to be rethought, even if it goes against societal norms, even at the cost of your reputation. The point is, when you have looked death in the face, in any way shape or form, when you come out on the other side of tragedy, the world looks different. In his book, Crossing to Safety, Wallace Stegner wrote, “Those who have been dead understand things that will never be understood by those who have only lived.”

The author ends our journey with Job by stating, “Then Job died, old and satisfied.” I mentioned at the beginning of all this four Sundays ago that this ending might not leave you as satisfied as our dear friend Job was. But let me give you an alternate translation to that. The original Hebrew sounds more like this, “Job died, old and full of days.” That has a different ring to it, doesn’t it. It’s less warm and fuzzy, more matter of fact like. Full of days. I think that was intentional. The point here is not that he died happy. The point here is that he died full, he died having experienced so much of what life has to offer, both the good and the bad. And he died knowing that God was with him through it all, which is why he could honestly say that he had seen God, that he understood his relationship with God like never before. 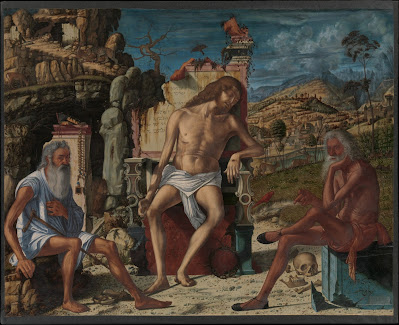 As you ponder what this means for you in your own life, take a moment and look at this painting from Italian artist Vittore Carpaccio called The Meditation on the Passion. The setting of this painting takes place during the Three Days. Sitting in the middle is Jesus, post-crucifixion, pre-resurrection. On his right is Jerome, but on his left is, lo and behold, Job, of all people. There’s a lot going on in this painting but the one thing I’d like you to notice is Job’s right hand. He’s pointing to his feet, as if to remind us of all that he had walked through in his life. He may have died satisfied, happy, and content, but the artist is keying in on something we all know to be true, that Job never forgot the pain and heartache of his past life, that he carried that with him for the rest of his days, and he had the callouses to show for it. I love the way he and Jesus sit there, contemplating, just before the resurrection, which the Job story foreshadowed so many centuries before.

So, that brings us to the end my friends. How satisfying was it? Less than you hoped? More than you expected? If we go into this story thinking we are going to have all our questions answered, that we’re going to find the meaning of life, or the meaning of death as it were, then we’ll probably be leave it disappointed. But I think it’s those of us who begin this story by shedding all we think we know about God, by stripping ourselves of our robes as it were, and sit with Job and God in the ashes, to see what we can discover about ourselves, our God, our world, and how we relate to it, it’s those of us who can do that, might just walk away from this book satisfied. And more than that, walk away from our own ash piles, with a new look on life, with new appreciation for those around us, with new priorities, ready to begin living our resurrected lives, starting now. Thank you for taking the time to sit with Job with me. May we, when we leave this world, die like Job, old, and full of days. Amen.