No Rest for the Weary?

Ron Valadez · No Rest for the Weary?


Alright, so we are done with the Gospel of Mark! I hope you have enjoyed our journey with Mark this year, and even if it’s not your favorite Gospel like it is mine, I hope you can at least appreciate why I hold it in such high esteem. The next Gospel we will be reading through will be the Gospel of Luke, but we’ll have to wait until the end of Advent before we start that. But never fear, we will have plenty to sink our teeth into until then. First up, between now and the Day of Pentecost, which falls on May 31st this year, we will be spending some time in the early days of the church. We’ll start with some readings from the book of Acts and end with some passages from two letters, Thessalonians and First Corinthians. Then, this summer, we will have three series, five weeks in the book of Job, five weeks in Second Corinthians, and then we’ll end the summer with a four-week series on the Lord’s Prayer from the Gospel of Luke. So, that’s what we have planned for the next four months! I hope you’re looking forward to it as much as I am!

But right now, we are in the book of Acts, chapter three specifically. We skipped chapter one, and chapter two we will be reading on the Day of Pentecost because that’s where that story occurs. Like the Palm Sunday story, we read it out of chronological order, because the church year doesn’t always line up very nicely. The Easter season is actually fifty days long but there’s really not that much story to fit into the fifty days between Easter Sunday and the Day of Pentecost but it is what it is. We really haven’t skipped all that much. Chapter one begins with the risen Christ ascending into the clouds and ends with the followers picking a replacement for Judas, who had committed suicide after handing Jesus over to the Jewish leadership.

Chapter two is mostly the events of Pentecost, followed by an impromptu sermon by Peter, and then the chapter closes with these verses, “The believers devoted themselves to the apostles’ teaching, to the community, to their shared meals, and to their prayers. A sense of awe came over everyone. God performed many wonders and signs through the apostles. All the believers were united and shared everything. They would sell pieces of property and possessions and distribute the proceeds to everyone who needed them. Every day, they met together in the temple and ate in their homes. They shared food with gladness and simplicity. They praised God and demonstrated God’s goodness to everyone. The Lord added daily to the community those who were being saved.”

The author then moves into our story from chapter three. But I wanted to read those preceding verses to you because I wanted to point out something that will be important later. And that is this, the author is very vague about how much time had elapsed between the events of Pentecost and this story of the Healing at the Beautiful Gate. We really don’t know. Was it days, weeks, months, years? No idea. And I think that’s kind of the point that the author was making by being so vague. It really doesn’t matter for our author. What matters seems to be this quick progression from the Day of Pentecost to this story at the Beautiful Gate. And to help explain why this is significant, we have to put ourselves into the shoes of these first followers of Jesus.

They had just lost their savior. No, they didn’t just lose him, they lost him twice! The first time was when they had to watch in horror as Jesus was mutilated, humiliated, and executed in the most cruel way known to humankind. They were so distraught from that experience that the only thing they could do was go and hide as we heard from Bishop Mark last week. They went and hid in an upper room without any sense of direction, without any hope, in complete and utter despair. Then Jesus is raised, they get him back, only for him to be taken again! Literally wisped away into the clouds! This time he leaves them in a better state, they are no longer in the pit of despair, but we’d be wise to recognize that they had lost him yet again!

Have you ever had a dream of a lost loved one? The dream was so real, it was as if it was really them, that you really got to spend some afterlife time with them, and then you woke up. And at first you’re on cloud nine because of the experience of being with them but then reality sets in like a punch to the throat as you realize it was just a dream. Now, as jolting as a reality check as that is, you still have that warm, comforting feeling of your time with that loved one, as jolting as it is to come out of that you wouldn’t trade it for the world right? In an odd way, it brings both comfort and sadness to your gut. I seriously wonder if that is what these first followers of Christ were going through in these first days, weeks, months, however long it was, of the church. They are no longer in despair, but it all ain’t roses either! They got to see Jesus again, yes, but they also had to say goodbye all over again and I don’t think we should downplay that in the slightest, especially because of this first post-ascension story of the healing at the Beautiful Gate. 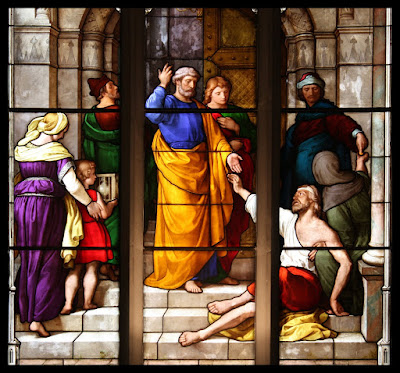 So, why is this so significant? Well, because everything is happening so fast. Aside from the fact that we really don’t know how much time has elapsed here, it really does seem like the author wants us to at least feel like not much time has really gone by. And that’s what stood out to me. After everything that has transpired, these first followers barely get a chance to breathe and ministry opportunities are already presenting themselves. They are still trying to figure out how to move forward, without Jesus, and where do they go, they go to church! Well, in this case, they go to temple, but you get what I’m saying. They did what so many of us do when we need guidance, when we are feeling a bit lost, when we are feeling a bit out of sync with God—we go to church! We go to church for some comfort, for some direction, for some healing, for some help, to feel closer to God!

That’s what they did, but instead, what happens first, before they get any of those things that they were looking for? A ministry opportunity falls right in front of their feet. And in the church world, what is the term “ministry opportunity” short for? Work! That’s all it is, if we’re being honest, right! Work! They went to church, to temple, to be fed, to be comforted, all those things we go to church for, only to be given work to do, and isn’t that just like Jesus! I mean, after living with the guy for the last three years you’d think they’d be wise the way Jesus works! They should’ve seen this coming from a mile away! “So, you’re distraught?” Jesus asks. “So, you’re feeling kinda lost?” Jesus asks. “So, you don’t know what to do?” Jesus asks, this time with a wink to the camera. “Well!” Jesus says, “I know just the thing to help you out!” As Jesus gives you a hearty pat on the back and says, “While you’re trying to figure that out, I’ve got some work for you to do!”

Wait, what? That’s never the answer that we’re expecting, is it! But how many times has Jesus done that to us? We’ve lost count! How many times have we felt lost, and the answer is not to give us the answer, but is to give us more work to do and in doing that work, lo and behold, we start to get our bearings a bit, don’t we. We start having these little moments when we think to ourselves, “Oh yeah, that’s why we do this. That’s why we do what we do. That’s why we follow Jesus.” Now, I’m sure we have all experienced this pandemic in different ways but I’ve heard from so many of you that it hasn’t been the vacation that people thought it’d be! In fact, I’m hearing from many people that they are more tired than they have ever been! And some of that tiredness has been thanks to Jesus. Thanks to Jesus saying to us, “Hey, while y’all are trying to figure this out, there’s work to do! And it ain’t gonna do itself!”