Picture it, the year is nineteen hundred and ninety-eight. I had been married for a few years by then, had one baby girl, and I was working on an assembly line for a company that made small motors. I had been doing that for a while, but I had just gotten fired. I was angry, scared, and embarrassed. Don't get me wrong I hated that job. It was boring, and I had already been in physical therapy for the havoc that working on an assembly line was doing to my joints and ligaments and posture. Not to mention the fact that it was definitely not a job that was advancing my career choice. But it paid the bills and I was thankful for at least that. At the time, I didn't know what I was going to do. What I hadn't realized was that my time there had been stirring something within me. It was slowly motivating me too get off my butt and go back to school. Though losing my job was devastating at the time, it sparked a new chapter in my life, a chapter that has led to me eventually becoming a pastor. New opportunities, New adventures, new life, was just around the corner, but at the time I just couldn't see it. I was not prepared, I was not ready, nor did I want, to hear any good news. Hold that thought for a moment while we turn to our Bible story for the day.

As many of you know, the Gospel of Mark is my absolute favorite of the four Gospels. The other three don’t even come close. And this chapter, the final chapter of Mark, and our final reading from this book for the year, is probably the biggest reason why it is my favorite. For an event as big as the resurrection of Christ, Mark still only gives eight verses to it. He was unrelenting in his directness, and his efficiency with his words. Mark doesn’t even seem to know the word embellishment, unlike his counterparts Matthew, Luke, and John. He began his book short and sweet, and he ends it the same way. But that’s not why I love this ending but before we get to that, Mark opens this chapter with three women entering stage left. That’s right, the final heroes of Mark’s Gospel are women. Not Jesus, as he doesn’t even make an appearance in this final chapter, but these three women are the final heroes according to Mark.

Now, not to get ahead of ourselves here but you might be thinking, how are they heroes? They ended up running away from the empty tomb scared half to death! Not to mention the fact that Mark says they didn’t say anything to anyone about what they saw and heard! But if we back up a bit, we realize that, one, they’re the only ones that show up. And I probably don’t have to tell you, that a majority of life’s hurdles only require you to show up, and the rest usually takes care of itself. But just showing up can be hard, and can require an amount of courage and strength, that a lot of us have trouble mustering up. But these three women were able to do just that, show up. Two, and maybe even more important than that, they don’t just show up, but they bring a hefty dose of faith with them as well. Mark shares that on the way to the tomb, a tomb by the way that they were expecting to be sealed shut with a large stone, the asked themselves, “Who’s going to roll the stone away from the entrance for us?”

Now, think about that for sec. They left on this mission to go and anoint Jesus' body, bringing with them supplies for such a mission that I’m sure weren’t cheap, without securing a way to open the tomb? Some might say that was a bit foolish. I disagree. I think they left there house that day, hoping for the best, and they were able to do that, under the distress from the events of the previous three days. I don’t know about you but I have trouble hoping for the best when I stub my toe, let alone when the savior of the world just got crucified! Others might say that the Spirit led them there because she knew what was waiting for them at the tomb. I’d caution against that line of thinking only because it doesn’t give credit where credit is due to these three amazing women, and their ability to hope for the best and show up, despite the events of the last three days. Let us not take that away from them. 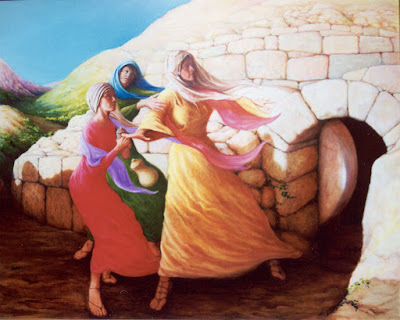 So, these three heroes get to the tomb, see that the stone has already been rolled away, and they see a young man in a white robe who tells them that Christ has risen, just as Jesus told them would happen, and to go and spread the news. Now, here’s where the story really gets interesting and why I love this Gospel the most. And there’s only two sentences left! After being told the greatest news the world has ever been told, what do they do? Mark writes, “Overcome with terror and dread, they fled from the tomb. They said nothing to anyone, because they were afraid.” They were not ready for good news at that moment. They were not ready to be comforted. They were not ready to get back to work. They were not ready, and so they ran.

How relatable is that! That’s life my friends! And in Mark’s wisdom, and more than wisdom, in his pastoral heart, he knew that this would be good news for us to hear. That even when given good news, even when given an out, even when given an escape route out of life’s darkness, it’s ok to say, “I’m not ready! Give me a moment! I’m so scared I can’t even think straight right now!” Mark knew that they eventually came around and shared this news, otherwise we wouldn’t be talking about it today, but Mark chose not to share that story, but this one. Because Mark has been telling story after story of all these heroic women, doing all these heroic things, thrusting this story forward, chapter after chapter, and Mark wanted us to know that even heroes need to take a moment sometimes, even heroes can say I’m not ready, even heroes have trouble seeing good news even when it’s staring them right in the face!

I can’t think of a better reminder, from a better pastor, than our beloved St. Mark right now. There are so many heroes surrounding our world right now: doctors, nurses, medical technicians, caregivers, delivery drivers, first responders, even the politicians who are trying to provide relief to us. God bless them all. But there’s an even larger group of heroes that cannot be discounted. And that’s you and I, who have sacrificed our livelihood for the sake of the most vulnerable, and I don’t just mean our financial livelihood but our spiritual livelihood and our emotional livelihood, as we sequester ourselves in our homes, so that others can have a fighting chance to battle this virus. And if you’re like me, when this started, I did not see any good news to share about any of this. Nor was I ready for it. All I could see initially was death, physical death, emotional death, spiritual death. And Mark says that’s ok, but it’s not the end of the story. Mark says that death did not, does not, and will never have the last word. That is the story of Easter for Mark. That it’s ok if you can’t see any good news in the moment of heartache. But it’s there. And it’s ok if you only can see it in hindsight. Because the good news about the good news is that it’s not dependent on our ability to see it or not. It comes no matter what!  Because there is nothing that can keep the good news of Jesus Christ at bay, not a virus, not a government, not a politician, not a religion, not even us and our fears. And that is the good news of Easter that we are called to share whenever we can, wherever we can, with grace for times when we cannot. Thanks be to God! Amen.