This week's sermon audio comes with a devotional that includes a few familiar parts of the Sunday liturgy since we've had to cancel worship services for the time being. I hope this is meaningful for you while we are apart. Stay strong, stay connected, stay informed--as we learn new ways to be the church.

So, we are now in chapter twelve of Mark’s Gospel. The end is almost here already as there’s only sixteen chapters total! A few of you may have noticed that we skipped all of chapter eleven. Is there something in that chapter that we don’t want you to know about? No. The reason that we are skipping it is because the Palm Sunday story is in it and we will be reading that…on Palm Sunday. It’s the only time we read something out of chronological order. It’s one of the failings of our church calendar. The amount of material between the events of Palm Sunday and Easter, in any of the four Gospels, is too lengthy to fit into that one week. We feel this less with Mark because Mark is so short and much more with the other three.

Now, why do I mention this? Many people wouldn’t even have noticed this, and pastor is now taking up valuable sermon time! Well, as I’ve said often, Mark has a very particular order to his stories that he shares with you. And to take something out of order might cause us to miss a few things. I mean, we wouldn’t do that to any other book right? We wouldn’t just skip chapter eleven of Moby Dick and say, “Oh, I’ll just read that between chapters thirteen and fourteen!” But there’s an even deeper reason that I mention chapter eleven today.

In Mark’s narrative, the events of Palm Sunday, the triumphal entry into Jerusalem, riding on a donkey, people spreading their clothes on the ground in front of him creating a makeshift red carpet for him, waving branches in the air, all of this fanfare signals one thing for us the reader—that Jesus’ time on earth is very near its end—and in the eyes of Jesus’ enemies, it set in motion a series of events that would be his demise. So, form a narrative perspective, all of the stories after that, must be read in light of the events of Palm Sunday, especially Jesus’ own realization that his time is almost up. You will see a change in attitude in Jesus from here on out. He is short with people. He gets a bit snippy! Patience is wearing thin.

You now that story of him cursing a fig tree because it didn’t have any figs on it? That’s in chapter eleven. When I preached on that story last year from the Gospel of Matthew, my sermon title was, “That day that Jesus woke up on the wrong side of the bed.” The story of Jesus throwing a tantrum in the temple because they were exchanging money there, and he flips their tables over, that’s in chapter eleven! Great stories! My point is, the events of Palm Sunday are clearly another major turning point in Mark’s overall storyline, and we’d be wise to remember that, and keep that in mind as we hear these stories that follow until we actually get to Palm Sunday. 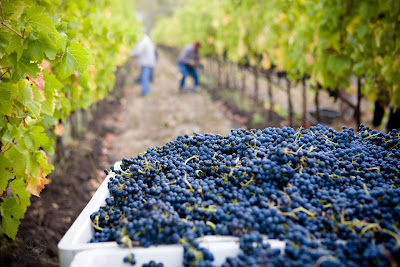 So, as usual, we have two different stories in our reading for today. And they're not really stories, they're more like scenes, aren’t they. The first is a parable, which is nice because we haven’t had one in a little while. This is the Parable of the Tenants, or as some have called it, the Parable of the Wicked Tenants. And that’s exactly what they are—greedy, violent, wicked tenants. It begins with this sweet scene of a farmer putting in so much love and care and effort into a vineyard. The farmer had so much hope for this vineyard. And the farmer was right because it was a success! The vineyard had a fine harvest. But when it was time to collect the farmer's share of the crops from the tenants, they either beat or killed everyone the farmer sent to collect!

Now, what would you do at that point? Would you go back? Would you send anyone else? I’m guessing no! You wouldn’t! You’d probably call the authorities! But what does this farmer do? The farmer sends the one and only heir, the only child that the farmer had! Figuring, they won’t harm my one and only beloved child! Well, guess what, they killed the heir as well! Jesus then asks them, “So what will the owner of the vineyard do?” But of course, he doesn’t let them answer because Jesus has been in a bit of a mood lately! He says, “The owner will come and destroy those tenants and give the vineyard to others.” Mark shares that they were none too pleased with this parable because they figured out that it was about them! I’m imagining Jesus scowling down at them as he told it.

The next scene is Jesus being harassed by the Pharisees and supporters of King Herod. They’re trying to trap him into saying something stupid, something that’ll get him in trouble—especially because they could probably tell that his patience is wearing thin! They’re just pushing his buttons any chance they get. So, after buttering him up a bit, they ask him if they are still required to pay taxes to Caesar, the secular ruler that occupies their homeland. They knew that answering yes was easy grounds for arrest. How Jesus responds astonishes them. “Give to Caesar what belongs to Caesar, and to God what belongs to God”, he said. Now, at first glance, that seems pretty straight forward, right. I mean, he was talking about money, right? I’m not so sure it’s that simple.

This could be about money, but remember how Mark likes to link two stories together? Think about that vineyard for a moment. What was the vineyard? Who was the farmer? Who are the tenants? What was the fruit? Well, Mark didn’t include an explanation of this parable, but I think we can make some educated guesses. So, let’s say the farmer is God. And the tenants are us, only the hope here is that we won’t be wicked tenants. That leaves the vineyard and the fruit. If the vineyard is the world that we inhabit, planet Earth, then I’d argue that the fruit is God’s work in our world. But here’s the kicker, God’s work, is done by us, just like the tenants working that vineyard, helping it to produce fruit. Just like our denomination’s tagline, “God’s Work, Our Hands.”

Now, remember, we are on a stewardship focus this Lent, so we’ve been asking ourselves each week, “What is God asking us to take care of in this story?” God’s work. God’s work is so precious in our world, and God has prepared the world to produce so much fruit, God has put so much care and love into this world. And God asks us to care for it, to be good stewards of it. Why? To produce and harvest fruit. What is this fruit? For the answer to that, you’ll just have to tune in next week, when we read the rest of chapter twelve. In the meantime, rest assured that we are called to care for and protect God’s work in the world, a world that has so many obstacles and wickedness that tries to get in the way. Which is why we need each other to do this work, side by side, even when we are not physically able to be together. The call remains—to be good stewards of God’s work, to be good caretakers, to be good tenants. But we do not go alone, God goes with us, we are never alone. Thanks be to God. Amen.