This week's sermon audio comes with a devotional that includes a few familiar parts of the Sunday liturgy, since we've had to postpone worship services for the time being. I hope this is meaningful for you while we are apart. Stay strong, stay connected, stay informed--as we learn new ways to be the church.


We are at the end of the twelfth chapter of Mark this week and before we dive into these stories, one thing must be pointed out. With the close of this chapter, Jesus’ public ministry comes to an end. From here on out, he gradually but swiftly withdraws to those closest to him. I found that quite timely, as we are doing the same thing right now, withdrawing to those closest to us, as we wait out this pandemic we are currently in. Jesus withdrew to find comfort with those he trusted, with those he knew had his best interests at heart, with those he knew loved him. Though our withdrawing isn’t quite as voluntary as his was, my prayer for you is that you are also finding comfort with those closest to you. For some of you that may be family, for some it may be roommates, for others it may be neighbors, and for some of you, that may be the very presence of Jesus. So, from here on out, know that Christ is withdrawing too, to those closest to him, and that includes you.

So, let’s dig into these stories we have before us today. Mark continues the pattern of sharing a teaching of Jesus' and then giving us a story of how that teaching is exemplified. Scene one is a pharisee asking Jesus which commandment is the greatest. It sounds like another trick, doesn’t it. It sounds like he is trying to trip him up, like the pharisees have been doing for quite some time. But the way this scene ends, which will get to in a moment, makes it difficult to say if he was one of those pharisees. Odds are, they weren’t all bad! Jesus answers him with this, “love the Lord your God with all your heart, with all your being, with all your mind, and with all your strength…[and] love your neighbor as yourself. No other commandment is greater than these.”

What I find striking about that is the way that Jesus pairs these two commandments. On the surface, they have nothing to do with one another. What would loving God have to do with loving others? It helps to hear this from the mindset of a first-century person. Remember, they still lived under a world view that gods were separate entities, living in the clouds or under the earth or in the sea, but not here with us. Not only that, but gods needed to be appeased in some way, their wrath needed to be either snuffed out or satiated in some way. Their fellow human beings, however? They just needed to be tolerated at best, but they weren’t a part of one’s “plan of salvation.” So to hear Jesus couple these two together, our relationship with God and our relationship with others, is quite interesting and unique. It’s almost as if Jesus were melding the two together, as if one didn’t make sense without the other. And that’s exactly what Jesus was trying to get at here, which Mark makes to come alive with the final scene but let’s not get ahead of ourselves.

The pharisee, known in our reading as the “legal expert”, replies to Jesus’ answer with, “Well said, Teacher. You have truthfully said that God is one and there is no other besides him. And to love God with all of the heart, a full understanding, and all of one’s strength, and to love one’s neighbor as oneself is much more important than all kinds of entirely burned offerings and sacrifices.” Now, you’re probably thinking to yourself, “This guy is just buttering him up! Who does he think he is! Jesus is gonna see right through this!” Well, maybe, but Jesus’ response is surprising. He says, “You aren’t far from God’s kingdom.” Really? That’s it? I thought for sure that Jesus was gonna tear into him! Maybe at this point in the story, Jesus is just getting tired, tired of arguing, tired of traveling, tired of always looking over his shoulder, sleeping with one eye open, just plain tired. Or, maybe this pharisee was really on to something! Maybe he was really starting to get it! But let’s move on! The most important scene is yet to come, and it just might clear this up.

Jesus then goes on teaching them, and ends with this final lesson. He tells them to watch out for the legal experts, the pharisees, one of whom he was just praising a moment ago. He tells them that they parade themselves wherever they go, looking to be honored by all for their righteousness, when all the while he says, “they are the ones who cheat widows out of their homes!” They were the predatory lenders of their day! And then, the next scene zooms in tightly to one of those very widows that Jesus referred to, almost as if to say, “I wonder how those widows are reacting to the pharisees’ villainy!” They must be plotting their revenge, right! They must be so angry that can’t even see straight! They’re probably badmouthing the pharisees to anyone that will listen, right! And it is here that we get the hero of the story, the one to whom we as the ready is supposed to look up to, the one we are supposed to model our own behavior after. 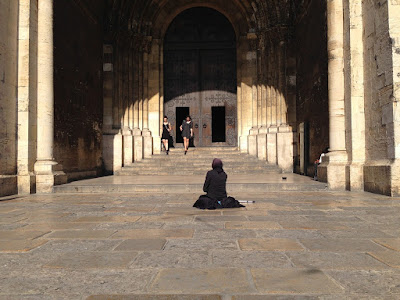 And entering stage left, we see a poor widow coming to the temple, probably to worship or to say a prayer, and on the way, she stops to give her offering. Ahead of her are a bunch of rich people putting in large amounts of money. She unassumingly puts two coins in and goes on her way. Watching her, Jesus pulls his followers aside and says, “This poor widow has put in more than everyone who’s been putting money in the treasury. All of them are giving out of their spare change. But she, from her hopeless poverty, has given everything she had, even what she needed to live on.” And Jesus leaves it at that. What more is there to say?

Now, you might be thinking, especially since we’ve been focusing on stewardship this Lent, that I’m about to say that this is all about how much we should be giving! "If pastor even tells me that I have to give like this poor widow!" No, I’m not going to say any of those things. Although if you want to give like that we’re not gonna stop you! I’m kidding! Well, sort of, anyway! I don’t think this is just about our giving. I think something even deeper is going on here, as there usually is. If we ask ourselves that question that we’ve been asking each week, “What is God asking us to take care of in this story?” The answer is, people. Not necessarily the offering plate, although that is certainly one way to take care of people.

This is what Jesus and Mark were leading to this whole time, the call to take care of people. Think about it, the story began with Jesus sharing the greatest commandment, to love God and to love others, as if they are one and the same. He then points out how downright evil the pharisees have been, with their predatory ways against poor widows. And ends with a poor widow, giving all she has, for the betterment of others. Whether that money got to the poor as it was supposed to or not didn’t matter to her. She knew how corrupt the ones holding the treasury were. She was going to give, because it was the right thing to do, because the call to care for others, had not waned. In fact, it was stronger than ever. This poor widow knew the greatest commandment, to love God and to love neighbor. And maybe even more than that, she knew that God didn’t need her love or her money, people did. That was the greatest commandment in action!

I can’t think of a better story for times like these than this one. We humans are feeling more vulnerable than we have in our lifetimes. And it’s times like these that we have been preparing for all these years. It is times like these that we have been equipped by Christ for, to care for people, regardless of who they are, for we know now more than ever that all are in need of our care, that no one is impervious to the dangers of life. We all stand on equal ground, bending to a virus that knows no partiality, called to care for people, called to be stewards of people. While you fulfill this calling my friends, know most assuredly, God, the perfecter of stewardship, cares for you. Thanks be to God. Amen.