Caring for the Ego

Alright, so we are continuing with our exploration of stewardship, and how each of these stories in Lent speaks to that topic. As a reminder, the dictionary definition of stewardship is, “the job of supervising or taking care of something.” By the end of Lent, you will have that memorized. Using that definition, we are asking ourselves each Sunday, “What are we being asked to take care of in this story?” Which is just a less churchy way of asking, “What are we being called to be stewards of in this story?” One more thing I want us to keep in mind is that most of my sermons are meant to be heard as a community. What I mean by that is, I rarely expect you all to go home and wonder how this sermon is supposed affect you as an individual. My hope is usually more like, how can this sermon affect us as a congregation.

Contrast that with sermons you’d hear at a non-denominational, big-box church where it’s all about the individual, all about your personal relationship with Jesus. Think of it this way, if that’s really the perspective you should be bringing, you could do that at home. But instead, we come here not as a bunch of individuals who just happen to be taking up the same space every Sunday morning, we come here to be together, to be united, to be a community, to be fed side by side at the table—and I would add, we come there to listen together as well, and to ponder what we’ve heard together, and to ask ourselves, what is God moving us to do or be through what we’ve heard today? How can what we’ve heard, transform us, as a congregation?

So, keep all that in the back of your minds as we tackle our Bible story for today. Once again, we have here two seemingly very different stories that Mark provides for us. We’d be wise to remember though that Mark is a master-level storyteller. As such, the order that these stories are placed is significant. And more often than not, there is a thread running through many of them. Mark loved to teach lessons with pairs of stories that he has put together, he loved to see how two seemingly different stories played and danced with each other. The first story centers around a conversation between Jesus and James and John. Jesus had just got done predicting his own death and resurrection, leaving them stumped again, and James and John ask Jesus to have prominent positions when Jesus comes into power.

The second story is about the healing of a blind beggar by the name of Bartimaeus, who asks for the ability to see. Now, these two stories couldn’t be more different from one another, on the surface at least. But what Mark often does, is teach a lesson with one story, and then immediately afterward, he’ll share a story that exemplifies what he was trying to teach with the last story, and this is one of those examples. Mark left us a clue though, that these stories are related in some way, and that clue comes in the form of a question. This question, asked twice by Jesus, serves as an anchor. You can almost hear Mark whispering, “These two stories are connected!” The question is this, asked by Jesus in each of these stories, directed at each of the protagonists, “What do you want me to do for you?”

“What do you want me to do for you?” Jesus asks this to both James and John, and Bartimaeus. Their answers have lots of similarities, and I’d argue, at least one big difference. Let’s look first at James and John. First of all, they start by demanding of Jesus by asking, “Teacher, we want you to do for us whatever we ask.” Who does that? Let alone, who comes to Jesus, of all people, with demands like that? Now, if you ignore what follows, you could give them the benefit of the doubt and say, maybe they were just exhibiting a strong faith in Jesus’ ability to deliver! Then you read ahead and see what it is they wanted. Jesus asked, “What do you want me to do for you?” I have a feeling Jesus already knew, but he chose to just play along with them.

Then they ask him to allow them to be at his side, on his right and on his left, when he comes in glory. What they are asking of him are positions of power, prestige, and status. Now, as you may remember, the disciples were clueless as to what Jesus was here for. In spite of him telling them point-blank that he’d have to die and rise, they were expecting him to come into political and military power, and overthrow a very corrupt Roman government, so that their people could take back the land promised to them, generations ago, beginning with Abraham, as we read back in the Fall. This is what they are referring to when they mention his glory. Not the resurrection or even the second coming the way we’d hear it.

Think of it this way, imagine a high ranking general, of a rebellious militia, who is about to spark a coup. That’s how they saw Jesus, and they were asking to be his lieutenants. If that makes you feel a little uneasy, it’s supposed to. Like I said, this was about power, prestige, status, but even more fundamental, this was about them, this was about the almighty I, their ego. The word ego is literally the Latin word for I. So, when Jesus tells them no, that it’s not something for him to give, what he’s really saying here is, “It’s not my job to stroke your ego for you, because clearly you two are doing a fine job of that on your own!” Which brings me to the answer to our question, “What are we being asked to care for in this story?” Our ego. We are being asked to care for, to be good stewards of, our egos.

Hold that thought and let’s move to the next scene. A blind beggar named Bartimaeus is shouting for mercy from the side of the road as Jesus is walking by. Contrast that with James and John’s demand for Jesus to give whatever they ask. A little mercy is all Bartimaeus is asking for. And honestly, I’m not convinced he was expecting a miracle, he was probably just hoping to be given some food, maybe a few coins from Jesus’ treasury, and maybe to be treated like a human being for once! And then Jesus asks him that same question he asked James and John, “What do you want me to do for you?” Maybe it was the way Jesus asked it, maybe it was his tone of voice, I don’t know, but something made Bartimaeus shoot for the stars here! I’m gonna go for broke, Bartimaeus thought! I want to see! I want to see.

Contrast that with James and John asking to be Jesus’ lieutenants. Bartimaeus isn’t interested in power, prestige, status, none of those things. He just wanted something that so many of us take for granted. Our sight. A basic human need. That was shooting for the stars for Bartimaeus. He could have asked for anything. He could have seen Jesus as a genie in a lamp and asked for riches or land or who knows what. Nope, he just wanted to see. And if you think about it, once he could see, then what? He’d still be poor, he’d still be a beggar, he’d still be unemployed! But he didn’t ask for any of those things, just to see. Now some might say, “Well, he’s still looking out for number one! His eyesight is for him!” But the way the scene ends gives us a different story. 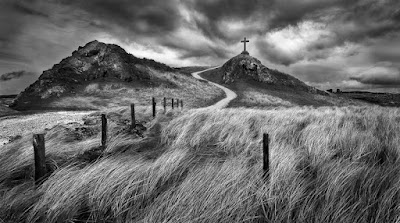 Bartimaeus receives his sight from Jesus and any number of endings is possible. He could have taken his gift of sight and left, left to find a job, a new life, a new start somewhere. In his eyes, he just won the lottery! The possibilities were endless! But what does he do? Mark writes that “he began to follow Jesus on the way.” Now, here’s a little insider info for you. When Mark uses the phrase “the way”, it is almost always in connection to Jesus moving toward the cross, the ultimate destination of Jesus for Mark. So you could read that final line as, “he began to follow Jesus on the way [to the cross].” Now, if you had just won the lottery, whatever that might be for you, is that what you would do? I wouldn’t, there are too many things I have to buy, too many places I have to see, too many experiences I’ve yet to have!

But this wasn’t all about him, and Bartimaeus knew that, even if the disciples, particularly James and John, did not. To be fair to those two, they all were pretty clueless. But Bartimaeus somehow knew, that this was about bigger things, this was about Jesus’ mission in the world, a mission that Bartimaeus could be a part of—and that was about the cross: Jesus’ path to leave the self behind, in his completely selfless, egoless act, that ended on the cross. So, all of this got me thinking about that question “What do you want me to do for you?” and hearing that as a congregation, not as an individual. How do we answer that question of Jesus’?

The typical answers are: give us new members, new members with big pocketbooks, new members with families, heavier offering plates, to be remembered in people’s legacy giving, better worship, better music, better sermons, more visitations, new members with big pocketbooks! Oh, I already said that one. These are our answers to Jesus’ question, “What do you want me to do for you Bethlehem?” And they’re not bad answers but what if Jesus followed up that question with, “Why?” In other words, “If I give you those things, whatcha gonna do with them?” The answer to that question, will reveal how well we have been taking care of our egos, how selfless these requests really are—whether we are on the way with Jesus, on the way to the cross, or not.

This short but powerful story of the healing of Bartimaeus encapsulates the whole of what Mark was trying to teach us in this chapter. The call to be good stewards of our egos is less about not being a jerk out there in the world, and more about pointing the world to the selfless, egoless way of Christ on the cross. And for Mark, that was the whole point of following Jesus. May we be ever careful with our egos, good stewards of the self, so that we may shine a light on Christ, the perfecter of selflessness. Thanks be to God. Amen.