Comfort In, Dump Out

The prophet Isaiah had a Herculean task before him. To quickly recap the overall narrative trajectory that we have been on in these Bible stories, God’s people have now been in exile for quite some time; taken from their Promised Land by a conquering neighbor, the Babylonians, who were now the top dog, having conquered the Assyrians since last week’s reading. There’s always a bigger fish, right? And speaking of bigger fish, the Babylonians are having their own problems with one of their neighboring nations, the Persians. So it’s probably safe to say that their attention is on the Persians at this point in the story and keeping the exiles under their thumb is less of a priority, which is good news for God’s people.

All this is to say that their exile is winding down a bit and so there is now some light at the end of the tunnel. The Herculean task before Isaiah that I mentioned, is to provide comfort to a suffering people. Why would that be so hard, you might ask? Well, because deep down in their theological psyche, they believed that their exile was due to their bad behavior, which we have talked about before. That belief was so ingrained in them, it was difficult for them to see life in any other way, with any other lens. The reality is, they didn’t need God to punish them, they had become their own source of punishment, their own jailors. They were convinced that they deserved the exile and no one was going to convince them otherwise.

One of the things that I love about these old stories from the Bible is just how relatable they are. This is a very human reaction for a lot of us when we know that we have done something wrong. Not everyone, to be sure, but a lot of us have a need to pay for our wrongs, to make things right, so we can move on. But that’s where we get hung up, moving on. Who determines when it’s time to stop punishing ourselves for our wrongs and move on? Is there a chart out there somewhere that I don’t know about. If there is please share it with me so I can see if it’s time to stop my self-inflicted punishment for my own wrongdoings! This practice of being so hard on ourselves was exemplified in our daughter Grace.

When she was little, Sara and I didn’t have to be that hard on her when she misbehaved because she was her own best punisher. No lie, she would put herself on timeout. She had this innate sense of right and wrong and nothing in between and she kept herself in check without anyone’s help. The trouble was, she was a bit too hard on herself. And that’s the state that God’s people were in when Isaiah became their prophet. So the question that he had to answer was this, how do you provide comfort and peace to a people who don’t know when to stop punishing themselves? Isaiah’s answer to this is nothing short of brilliant!

Instead of trying to convince them that their suffering was just a part of life and that God does not directly inflict pain and suffering on the world, he leans into it. He allows them to keep believing that, and actually uses it to provide a word of comfort for them. He tells them that God says that they’ve been punished enough, in fact, he goes even further and tells them that they’ve actually suffered twice as much as they should have! Brilliant! Instead of trying to change their well-ingrained belief system, he uses it to get them to move beyond their self-punishment—to get them to move forward beyond their pain and suffering—especially before it becomes part of their identity.

The passage then ends in a very curious way. Isaiah presents God in a way that a doorman announces the arrival of guests at a Victorian party. But the way that he does it, is as if they wouldn’t recognize God upon arrival, and I don’t think that’s far from the truth! If they have believed for centuries that God is someone who directly inflicts pain and suffering on the world to punish humans for bad behavior, then it only makes sense that when God shows up, God would be unrecognizable to them. So Isaiah, just to make sure that they recognize God and don’t miss God’s arrival, tells them what to expect. And his description is not what they’d expect.

It starts off quite normal, with Isaiah mentioning just how powerful and mighty God is, and how strong God’s arms are! But then he tells them what those strong arms are for, and they were probably stunned! Because those strong arms of God are not for punishing, not for forcing them into submission, not for killing, not for scaring them into behaving, no! Isaiah tells them that those strong arms are for feeding the flock, leading mother ewes with gentleness, gathering lambs, and holding them close, which is just the biblical way of saying “hugging them.” This description of God is so sugary sweet I was half expecting Isaiah to say that God was coming with a puppy under the other arm!

And I believe this description of God is so sugary sweet because Isaiah is having to fight this millennia-old notion that God is this angry old bearded guy in the clouds waiting to throw a lightning bolt at anyone who looks at him funny! Like I said, a Herculean task indeed, but I think Isaiah is pretty effective here. If they can’t get past their “punishment” and be comforted by this, I don’t know what will. And that’s the bottom line in this passage of Isaiah. His job here is to provide comfort and will try anything to accomplish that, even allow them to believe things about God that aren’t necessarily true—whatever gets them past this pain and suffering they are in, and into a future of comfort and peace with God and with themselves, so they can, in turn, provide comfort for others in pain and suffering. 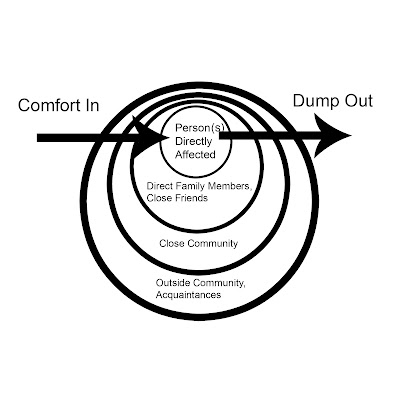 Then you’re going to draw larger circles around that small circle and in each of those circles, you’re going to place people who are closest to that person in the center in the nearest circle to them, to those who are merely acquaintances on the outside circle, all based on how close they are to the actual center crisis circle. So, spouses, children, parents might be in the smaller circles, friends might be in the medium-sized circles, and so on. Ok, now here’s where it gets interesting. And instead of trying to paraphrase this I’m just going to read to you from Dr. Silk’s own words.

“Here are the rules. The person in the center ring can say anything she wants, to anyone, anywhere. She can…complain and whine and moan and curse the heavens and say, “Life is unfair” and “Why me?” That’s the one payoff for being in the center ring. Everyone else can say those things too, but only to people in larger rings. When you are talking to a person in a ring smaller than yours, someone closer to the center of the crisis, the goal is to help. Listening is often more helpful than talking. But if you’re going to open your mouth, ask yourself if what you are about to say is likely to provide comfort and support. If it isn’t, don’t say it.

Don’t, for example, give advice. People who are suffering from trauma don’t need advice. They need comfort and support. So say, “I’m sorry” or “This must really be hard for you” or “Can I bring you a [meal]?” Don’t say, “You should hear what happened to me” or “Here’s what I would do if I were you.” And don’t say, “This is really bringing me down.” If you want to scream or cry or complain, if you want to tell someone how shocked you are or how icky you feel, or whine about how it reminds you of all the terrible things that have happened to you lately, that’s fine. It’s a perfectly normal response. Just do it to someone in a bigger ring. Comfort IN, dump OUT.”

Comfort in, dump out. Isaiah recognized that God’s people were in the center crisis circle and so he knew that his job now was to comfort, period. And so that’s what he did. This Ring Theory has played an important role in my own life, it has been invaluable to me, not just as a pastor but simply as a human being that crosses paths with lots of other human beings that are going through pain and suffering. I hope you find it helpful as well. I will link some interesting articles about it when I post this sermon online if you’d like to read more about it.

I can’t think of a higher calling than to bring comfort to those around us. And that’s one of the things I appreciate most about these old Bible stories, the ability they give us to give hope to others because we too have been through some tough times as well. May this season of Advent rekindle in us the desire to bring hope to a troubled world, with care and gentleness, gentle as a God holding lambs and hugging them. Thanks be to God. Amen.