A New Hope: Jeremiah and the Rebellious Nature of Advent


So, I can’t take credit for that, a youth director in New Mexico made that. And yes, she plans to make one for every Sunday in Advent. Whether I’ll use them all I’m not sure yet but I couldn’t help but use this one. I was downright giddy when she first posted it. I hope the rest are as good as this one. I love that way that she put our Bible story for today, which is rather short, in perfect context for us.

So, let’s dig in. Jeremiah is not known for being a hopeful prophet. I mean, prophets aren’t generally known as glass-half-full people. As my Hebrew professor always used to joke, when a prophet enters the scene, you know it’s already too late. But Jeremiah in particular, is known as being the prophet of doom and gloom. And it’s really hard to blame him. As we read last week, the northern kingdom of God’s people had fallen and the southern kingdom was just waiting for their turn to be conquered. And that’s exactly what happens.

The southern kingdom of God’s people falls to a neighboring kingdom, and so now they’re just waiting to be sent into exile, the ancient version of modern-day internment camps; where God’s people were sent, away from their homes, away from what was familiar, away from all that brought them comfort. And Jeremiah, the prophet of doom and gloom, and judgment, felt called to tell his people that this was all their fault, due to their bad behavior. And so his king, not the king of the conquering nation, but Jeremiah’s own king, throws him into prison for speaking out against his own people. And so there sits Jeremiah, in a prison cell, probably thinking, “Now what do I do? My own people won’t listen to me, we’re on the brink of being sent into exile now that we’ve been conquered. What’s left to say?”

And so, he does something rather remarkable for him. He takes his doom and gloom hat off, and puts his hospice chaplain hat on. Jeremiah realizes that reminding his people of their bad behavior now is a moot point. Their end is nigh, and what they need now is not more judgment heaped upon them, but hope and comfort and promise—things a hospice chaplain brings, not your typical prophet. But here’s the thing, Jeremiah can’t help but be rebellious. But instead of rebelling against the behavior of his own people, he’s now rebelling against despair, and probably not just for the sake of his own people, but for the sake of his own heart as well, as he continues to sit in that prison cell, and fight his own despair. Like any good preacher, he knows that he can’t preach a sermon that he himself doesn’t also need to hear. 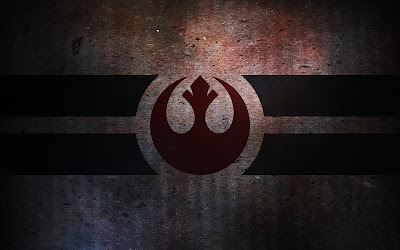 And so, Jeremiah should probably be known as the prophet of the rebellion and not the prophet of doom and gloom. Rebellion is in his blood and he, thankfully, can’t help that. And speaking of rebellions, Star Wars is full of them! From big rebellions against an entire Empire, to smaller rebellions against the human tendency to give in to the evil found deep within ourselves. Like The Lord of the Rings or The Chronicles of Narnia, Star Wars has become a mythology that speaks truth to our modern reality, which is probably why it has such an enduring place in the hearts of so many. One of my favorite Star Wars quotes comes from my second favorite Star Wars movie, Rogue One, in which the main protagonist exclaims, “Rebellions are built on hope!” And so is Jeremiah sitting in that prison cell, and so is this season of Advent.

Jeremiah, seeing his people and his nation whom he loves so dearly, crumble to pieces right before his eyes, decides to give words of hope and comfort and promise—words that endured in the hearts of so many, for millennia. Jeremiah speaks of a future time when all of God’s promises will be fulfilled. He speaks of one who will come and put even the best of their kings to shame by his perfection. Jeremiah speaks of a time when they will be whole again. He speaks of a time when the disconnectedness that they are currently feeling between them and their God will be no more. And they hear all of this while they are watching their world being stripped away from them piece by piece. But in spite of all the hopelessness that they see around them, Jeremiah has the audacity to give them a word of hope.

Today, our Christian eyes read this passage of Jeremiah and immediately think of the greatest rebel leader of them all, Jesus. And for those of you who’ve never thought of Jesus as a rebel, we’ll be reading through the Gospel of Mark starting in a few weeks and you’ll see just how much of a rebel Jesus was! Speaking of Jesus, there’s an interesting line in today’s reading. Jeremiah is talking about the one who is to come and fulfill all of God’s promises, and he says that he will be known by this phrase, “Our God is our righteousness.” Jeremiah had recognized, even way back then, centuries before Jesus, that they weren’t going to survive by their own righteousness, by their own perfection, but by another, whom we know today as Jesus, God incarnate, rebel of all rebels.

So rebellious, that when all the other gods of the world were making people sacrifice in order to be loved by God, our God just decided to love us. Period. That was a new kind of hope that the world had never seen before. That was a rebellion that had never been tried before by any other God. And that’s a rebellion that we don’t need to join, because God has already taken care of that one. So, before you join the many rebellions that are out there for you to join, fighting against racism, homophobia, xenophobia, sexism, you name it, there’s a rebellion to join, but before you do, Jeremiah reminds us today, that the greatest rebellion is the fight against despair and hopelessness. And that’s a rebellion we can all get behind. For "rebellions are built on hope." And our God has a never-ending supply of it. Thanks be to God. Amen.