For those of you who are tracking the path that God’s people are on in these stories that we’ve been reading this Fall, we are about a hundred years past last week’s story from Isaiah. In that story, the northern kingdom, Israel, was in danger of being conquered by the Assyrian empire. Well, since that story and this one from 2 Kings, that’s exactly what happened. The northern kingdom is no more. All that’s left of God’s people are now in the southern kingdom of Judah, which is where we get the modern name “Jew.”

This was the worst fear for the kingdom of Judah because now the Assyrians are on their doorstep. Over that last hundred years, the southern kingdom had been on a roller coaster of a ride with times of peace and long times of strife. They had a few good kings over the years, but the bad ones, were really bad. All of them though were descendants of David.

Their last two kings, before Josiah from today’s story, were particularly bad, especially King Manasseh. He was quite literally the worst of the worst! I mean, idol worship was just the beginning of his errors. He was so bad, he practiced child sacrifice! Even burned his own son alive. Like I said, the worst of the worst. Judah had to endure his reign for fifty-five years! When he died, his son Amon became king at the age of 22, was just as bad as his father, but was assassinated by his own officials two years later, which is why his son Josiah was so young when he took over the throne. King Josiah, however, was nothing like his father and grandfather. If Manasseh was the worst of the worst then Josiah was the best of the best. Biblical authors wrote very highly of him. 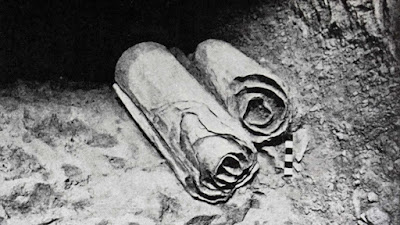 Of all the royal figures in the Bible, Jesus was probably the only one above Josiah. So, King Josiah returned to the worship of the God of Sarah and Abraham. And along with that, he decided to use the offerings of the people, their tithes, to repair God’s temple that had been neglected for many generations. While they are in the middle of those repairs and renovations, a scroll is discovered. They open it, read it, and weep. Why? Because, as scholars now believe, it was the book of Deuteronomy. The book that contained the promises of God for the people of God. As well as the warnings if they didn’t keep their end of the bargain.

They wept because they were lost, and even a good king like Josiah didn’t know how lost they really were, until someone showed him that scroll. This is really hard for us modern readers to comprehend, especially in the information age when nothing gets lost anymore, even stuff you’d like to get lost. But this would be like, ripping up this old carpet, and finding a Bible under there, and everyone looking at it and not knowing what it is! And then opening it and reading the story of Jesus for the first time and then looking around this room and saying, “Oh, so that’s why a cross is there! Oh, so that’s what that table is for! Oh, so water must go in that shell back there!” Can you even imagine that? It’s difficult I know, but that’s the state they were in when King Josiah came to the throne.

After generations of poor leadership, they had lost who they were. One of my favorite theologians, Walter Brueggemann, wrote a fantastic commentary on 1 & 2 Kings. About this particular passage, he writes, “The narrative presents Josiah’s act as an act of such profound importance that it parallels the founding act of Moses at Sinai...This act is nothing less than the recovery of a lost destiny.”

Not only had they lost who they were, they lost what they were created for in the world. They had lost their sense of purpose. That is a frightening place to be for anyone, let alone a whole nation of people. It’s one thing to ask, “Who am I?” Or “Who are we?” But something else entirely to ask, “Why am I here?” Or “Why are we here?” So, what can we learn from this story of King Josiah today? Because, at face value, it seems very far removed from anything we’ve experienced, but I’m not so sure about that.

Even we modern humans have a history of losing our way, losing our identity, losing our purpose, our destiny. We modern humans have a history of allowing things to get in the way of all that. Maybe they’re not as dramatic as idol worship or child sacrifice. Or, maybe they are. God knows that some of the world’s worst atrocities have been committed in our God’s name, in our God’s churches. All examples of times when we have lost who we are and what we were made for.

As I look at my own life, and the journey I’ve been on for the past forty-five years, I can see how I have changed, and grown, and transformed. And it wasn’t easy, let me tell you! I went kicking and screaming the whole way. This may surprise some of you but I haven’t always believed the way I do today. I think a lot of people think because I’m younger that I’ve always been a progressive thinker. That couldn’t be farther from the truth.

And then I went to college and learned how the world has come to be the place it is, how people have become the people we are; the history behind it all, the science behind it all, the psychology, sociology, anthropology behind it all. And then I want to seminary. And had my world and my faith rocked to its very core! It was those two experiences that caused me to rediscover who I was, whose I was, and what I was here for.

And lo and behold, it was not to judge: other people for the religion they were born into, or for who they love, or for what they know or don’t know, or for how old they are, or for what genitalia they were born with; or who God can speak through or not, or who is in and who is out, or who is loved by God and who is not. All these things and more I thought was my purpose here on Earth. Only to find out I was dead wrong. That was not an easy road my friends. It was quite painful in fact. But worth it.

Worth it because as I have rediscovered who I was, and what my purpose here is, I now have the opportunity to share that new life with others, and more importantly, to bring life into this world, instead of the death I was bringing before. Because let’s be honest, we’re not just talking about our theologies and philosophies on life. People are dying, either at the hands of others or by their own hands, either literally or emotionally, because so many humans, particularly the followers-of-God variety, have lost who they are, whose they are, and what their purpose is.

What I love about this story of King Josiah making the necessary changes to realign themselves with God’s will for them is the fact that their world was crumbling all around them. The Assyrians were breathing down their necks, ready to pounce on them like a lioness. And yet, none of that mattered to King Josiah. He could have just as easily thought, “Why bother? What’s the point? We’re about to be conquered, so why even bother returning to God now?”

But for King Josiah, right was right and wrong was wrong. People were suffering because they had lost their way, lost their destiny, and it didn’t matter how much longer they had here on Earth, they were going to do their best to make things right. I love that about them! Like Martin Luther who is credited with saying, “Even if I knew that tomorrow the world would end, today I’d still plant an apple tree.” King Josiah held on to hope with his last breath. There is something counter-cultural, and bold, and in-your-face about it that is so inspiring.

So, as you ponder this story this coming week, think about the journey you’ve been on. In what ways have you rediscovered your identity, your purpose here? What changes has God lead you to and more importantly, why? I’m guessing that if you really think about it, those changes have not just been for your own benefit, but for the benefit of the world around you.

The challenging part of all of this, and, quite frankly, the scary part, is wondering what’s next for you! Wondering what God could possibly ask you to change next! Wondering what is left for you to discover about who you are, whose you are, and what your purpose here is. “Aren’t I done yet?” you may ask! We’re all a work in progress aren’t we? Thankfully, God is never done with us. Thankfully, we have each other to lean on, the next time we find that next scroll, and dust it off, and read it, and gasp, and start the whole process over again, of rediscovering a lost destiny. What an adventure! Thanks be to God. Amen.