When I was with you last, we read the story of the northern and southern kingdoms uniting as one under the leadership of King David. And as you read last week, it didn’t last long. They split again, and our story for today comes from that time period. However, splitting the kingdom in two didn’t seem to help either. Both continued to live out their lives in constant turmoil, with each other, with the world around them, and with God.

In the five chapters between last week’s story and this week’s, they went through king after king after king, none of which were good. In fact, if you read those five chapters, just about every paragraph begins with, “And then ‘so and so’ became king, and he did evil in God’s eyes.” Seriously! Take a look, that phrase is said over and over about almost every king. It’s quite comical really, if not sad, but it’s also a great set up for today’s story of Elijah on Mount Carmel.

Bottom line, things aren’t going well for either kingdom. Any peace that they find is fleeting. And the evil that these kings were doing was usually in the form of allowing other gods to be worshiped, which is not a new problem with them. They had been struggling with monotheism since way back in those stories from Genesis that we read in September! Which brings us to the impetus of today’s story, at least through Elijah’s eyes. Elijah had been trying to correct his people, warn his people, of the error of their ways but it just wasn’t working. Elijah could just not get through to them. And so, Elijah is at his wits end with God’s people. Tensions are high. Elijah is not only having to compete with his people but also with the prophets of the other religions. In fact, tensions are so high that it has resulted in violence.

Elijah is the only prophet left because the rest have been murdered. And what did any of the kings do about that? Nothing. What did any of the priests do about it? Nothing. And so here’s Elijah, feeling backed into a corner, knowing that there’s a big ol’ target on his back being the last remaining prophet of this fledgling little religion. So, Elijah decides to invite them to a duel, to see who has the real God, and that should be clue number one that something is a little off with Elijah. He has run out of ideas and is willing to put everything on the line. What’s he got to lose? This is a pretty risky move, what if this doesn’t go Elijah’s way? He’s dead! Well, he figures, he’s dead anyway. Might as well go out in a blaze of glory. So, he concocts this plan, this duel between their god and our God.

I’m going to be honest with you, growing up, this was one of my favorite stories. As an adult, and especially as a pastor, I have some serious issues with this story and I almost did what many pastors are doing today, and chose something else to read and preach on. But you know me, I have a hard time turning down a challenge. One of my life’s mottos is, if something is difficult for me to do, then it’s probably good for me. And I’m glad I stuck with it because I ended up seeing this story in a whole new way, with the help of some other scholars and theologians of course, I can’t do this all by myself! But this story, and the verses that follow, which we’ll get to in a minute, became more meaningful for me, and I hope they will for you too.

Let me first tell you where I struggle with this story. This story is dripping with an egotistical, condescending, self-righteousness that really goes against my grain as a follower of Jesus. Granted, Jesus was known for being sassy, snarky, even downright insulting if he woke up on the wrong side of the bed, but the actions of Elijah in this story are just unacceptable to me. He goes far out of his way to not only prove the other prophets wrong, but insults them, makes fun of them, and is even quite crass with them but we can discuss that after worship as we don’t have time now. I mean, this is not how I was raised, or trained in seminary, to treat people of other religions. This is not appropriate behavior, then or now, and I know you well enough by now to know you agree.

So, at the end of this whole scene, Elijah believes that he has made his point. And he is basing his whole victory on the silence. Their god never answered with fire like Elijah challenged him to. The writer shares that there was “no sound.” Just silence. And Elijah claims victory after his altar is consumed by fire. Our reading ends with everyone shouting that Elijah’s God is God. But that’s actually not where the story ends, that’s just where they had us stop reading because what comes next is nothing short of horrifying.

Here’s the next verse, “Elijah said to them, “Seize Baal’s prophets! Don’t let any escape!” The people seized the prophets, and Elijah brought them to the Kishon Brook and killed them.” Elijah’s behavior goes from bad to worse. He goes from rude religious guy to homicidal maniac in one verse! There were 450 prophets of Baal! If this was a scene in a movie, the ground would be covered in bodies and the Kishon Brook would be running red! Horrifying doesn’t even begin to describe Elijah’s behavior.

So, what do we do with this? How do we justify this kind of behavior from a prophet of God? How do we read this story and be ok with it? Answer: we don’t. Religious people of every kind have done theological gymnastics to try and explain away stories like this. They say things like, “Well, it was a different time back then.” No. Or, “Well, God was more strict back then, more vengeful.” No. Or, “This was before Jesus so they didn’t know about grace.” No.

So, here’s another way to look at this story. What if, we weren’t supposed to accept Elijah’s behavior? What if, as readers of this story, we were supposed to recognize just how wrong Elijah was? What if that was our part to play in this? Now, you might be thinking, “Who’s doing the Bible gymnastics now?” Hear me out. As always, context is key. But instead of looking backward, we have to look at where this story goes next. Stay with me now! So, immediately after this, the drought ends and of course, Elijah takes full credit for this.

And then, the king’s wife, Jezebel, finds out what happened to her prophets of Baal, and is furious! In typical villain fashion, she sends word to Elijah that he is now an enemy of the state and wants him dead. Elijah is terrified, and runs for the hills, literally. The author writes, “Elijah finally sat down under a solitary broom bush. He longed for his own death and said: ‘It’s more than enough, God! Take my life because I’m no better than my ancestors.’”

After being cared for by angels, Elijah continues to flee but this time goes to a very familiar place, to a mountain. And not just any mountain, but God’s mountain, the same mountain that God met Moses on to receive the Ten Commandments. At least one of which, Elijah has recently broken. Once there, he hides in a cave, and is then told to go and stand on the mountainside because God is going to pass by. So that’s what Elijah does. 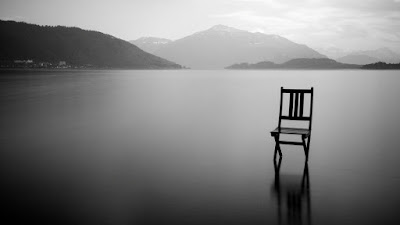 Elijah had a beautiful opportunity to show them just how powerful his God really was, just how limitless his God really was, how far-reaching, how loving his God really was, but turned to violence instead. All for the opportunity to be right. When the reality was, that God was with them, all of them, the whole time, because God cannot be contained or held back by us, or by our beliefs and disbeliefs, or by our faith and doubts, or even by our behavior and misbehaviors. Nothing can keep God from showing up, and this is a lesson that God’s people struggled to learn then, and continue to struggle to learn now.

And just so we’re clear, I’m not saying that God only shows up in silence. For an introvert like myself I find nothing but comfort in that thought but for some, the idea of sheer silence sounds dreadful! I think the point here is that God will show up whenever and wherever and however God wants to show up; and no prophet or priest or pastor or anyone gets to say otherwise! I hope you hear that as pure grace because that’s the way it’s meant to be heard.

Even for someone like myself who loves silence, it can be hard sometimes. Especially on a day like today, All Saints Sunday, when we remember those loved ones who have died, whose voice we long to hear again, whose laughter is just a fleeting memory, whose wisdom is so deeply yearned for. Be comforted in the assurance that God is in that silence. In life’s most joyful occasions and most painful moments, no matter how loud or silent they may be, God is there, and don’t let anyone, not even a prophet, tell you otherwise. Thanks be to God. Amen.