I had no idea where this sermon was going when I started writing it. I mean, I had a general idea of what I’d like to say but it just didn’t seem like enough. It might have been because I was a little preoccupied with our trip to Rwanda but I think it was something deeper than that, and I also think it has to do with this particular story we have before us today. So let’s dig in. To be honest I was kind of shocked that the powers that be selected this particular story for today.

So far this Fall we’ve had Sunday after Sunday of some really great stories, exciting stories, adventurous stories, even difficult, heartbreaking stories. And so, a few weeks ago I opened up my Bible to see what was coming ahead for us, read this story, and immediately checked to see if I opened up to the right page! I did but still wasn’t convinced that this was the right story so I checked online to be sure, I thought maybe this is a typo!

Nope, this was the right story. Here’s part of my problem, by comparison with the rest of our Fall stories so far, this one seemed sooooo boring! David becomes king, woopdeedo! He brings the Ark to Jerusalem and they have a worship service with lots of musical instruments. And I thought, really? That’s it? What in the world am I going to say about this story? And then, it hit me, like a ton of bricks, why I just wasn’t feeling this story. But I’m gonna leave you hanging for now because this is one of those stories that needs some context in order for us to understand the significance of it.

So, last week we read the story of Ruth and that was during the time of the Judges, those leaders like Gideon and Samson who were lifted up in a time of crisis but were not given any kind of permanent power. Well, that only last for so long before the people began to gripe and complain. O were they a bunch of whiners! Nothing was ever good enough for them. You see, now they wanted a king! They looked at the world around them and saw that everyone else had a king and so they wanted one too. The prophets kept telling them that this was a bad idea, just trust in God, not in humans. But no, they wanted to be like everyone else! I’m surprised there isn’t a verse where a prophet says, “If thine neighbors were to jump off a cliff, would thou follow?”

However, the prophets finally gave in and anointed a king for them. And the first one was a wackjob named Saul. I’m not kidding. This guy was the worst! Maybe the prophets were trying to teach them a hard lesson, I don’t know. Think of the worst U.S. president in all of history and that was Saul. No, really, he was that bad. Do they learn their lesson? Of course not! They try again, and anoint David.

Now, we read about David last year in the David and Bathsheba story and so we know that David was not a huge improvement over Saul! Meanwhile, there is a huge civil war going on. And just like our own, it was between the north and the south. They could not agree on anything: on who should be in charge, on what God’s will was, on where the capital should be, on where their center of worship and spirituality should be, nothing! And so they fought.

It wasn’t until they had a common enemy, the Philistines, that they worked with each other. So, after a very complicated and convoluted squabble that included a bunch of family drama, both sides agree to have one king, and both sides agree that it should be David, because he had fought by their side in the past and would continue to do so against the Philistines and other enemies that they’d encounter. And that’s where we jump into the story.

David is anointed again by the prophet Samuel, this time to be king over a united kingdom, the north and the south, for the first time in their history. And the first thing that he does is have some of his men go and fetch God’s chest, as our translation puts it, better known as the Ark of the Covenant. And where has this been all along? At some guy's house, some guy named Abinadab. Who’s Abinadab you ask? Nobody! Just some Joe Schmoe who probably had room in his garage for it!

Why was it there? Well, first it got captured by the Philistines in a horrible loss when Saul was king. Then it was returned because the Philistines thought it was haunted. True story. And so, Saul had it stored away in Abinadab’s house and there it stayed for decades because Saul had no use for it. Now, let me explain the significance of that. We’re talking about the Ark of the Covenant, you know, the Ark from Raiders of the Lost Ark! Up until Saul, the Ark symbolized the very presence of God for them. For them, wherever it was, God was. Period. And so, for it to be in some guys backyard shed for decades said so much about who God’s people had become, in large part due to Saul’s leadership, or lack thereof. 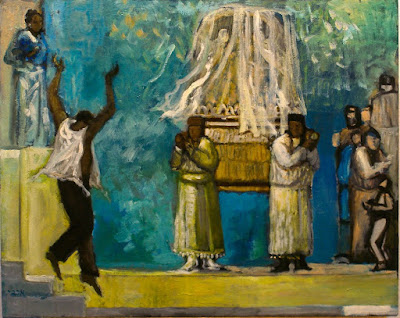 So, David attempts to correct this error. For all of David’s faults, and there were many, at the end of the day, he relied on the God of Abraham, Isaac and Jacob, his ancestors. So, David has the Ark brought back out and put in a central place of worship in Jerusalem. And that’s when the climax of our story happens, a worship service. A worship service! And that’s where I first had an issue with this story and that’s when I realized my own error. Had David not had to be king, he would have probably made a good pastor, because he knew that they needed a course correction, and in typical pastor fashion he did so with a worship service! This seemingly boring story was a beautiful reminder for me of just how awesome an opportunity we have here each and every Sunday.

Don’t get me wrong, I don’t think every worship service needs to be a celebration. Sometimes the weight of the world is just too heavy to celebrate and those are the times when we gather here to lament and seek God’s guidance. We’re good at that! We don’t need any help in that department. But what I, and I can only speak for myself, if you don’t have this problem then you have my admiration, but what this story teaches me is that I could work on my celebration skills. I have a tendency to focus on the negatives around me, to the point that I forget that there is so much to celebrate. Think of it this way, we are more apt to call a funeral service a celebration of life than we are Sunday morning worship. And that should just not be so.

So, here’s what I’d like for us to do. Shelby and Jesha are going to pass out some paper. During the next hymn, I’d like each of you to write one thing that you are able to celebrate today. No matter how big or small, write one thing down. When the hymn is over, they will collect them all and then, during the prayers, Sid and I will take turns reading them out loud. Each and every one, so keep them short and legible. Because I believe that no matter how bad life may get sometimes, there is always something to celebrate, and it is here that we get a chance to practice that discipline. Thanks be to God. Amen.