A Love That Just Won't Die

Our reading for today out of Isaiah comes from the same time period as last week’s reading from Hosea. These two prophets were actually contemporaries but there’s no evidence that they knew each other personally. Hosea’s ministry was in the northern kingdom of Israel, and Isaiah’s was in the southern kingdom of Judah. Last week we talked about how bad things had gotten in the north, especially since the split of the two kingdoms, how bad their behavior was, but also how loving and forgiving God ended up being with them.

So, now we shift our focus to the south, where Isaiah’s ministry was. Things aren’t much better there. Isaiah’s got his hands full as well. But what’s interesting about this shift in focus is to see them keep an eye on what is going on in the north. The neighboring kingdom of Assyria is threatening the northern kingdom’s borders. And so, like any country would do, they are paying close attention to how things go with them, especially because, if Assyria invades the north, they might set their sights on the south! International relations were not all that different than they are today. The technology is different but people are people, no matter the time or place.

So, Isaiah has the responsibility to help get his people’s lives in order, particularly their spiritual lives. From Isaiah’s perspective, they need to get right with God because the future was tenuous at best. However, Isaiah takes a different approach that Hosea was taking with the people in the north. Isaiah’s approach is harsh, it’s direct, it’s raw, even quite brutal. Oh, it doesn’t start that way, it starts off very sweet in fact, “let me sing a love song about a vineyard,” Isaiah writes.

It goes on about a friend who dug the vineyard, cleared away stones, planted the best vines, and built a tower and wine press. Granted, Isaiah was a prophet and not Paul McCartney. A love songwriter he was not. I’m glad he kept his day job. Regardless, just one and a half verses in is where the sweet, warm and fuzzy feelings end, and the “love song” takes a very dark turn indeed.

Apparently, the vineyard produced bad grapes instead of the good grapes that were expected. But that wasn’t the most tragic part. The song goes on to describe how the vintner reacts to the bad grapes. It’s not good. The vintner removes the hedges and walls of protection, and then abandons it—leaving it to the wilderness. Oh, and for added measure, commands the clouds not to rain on it, thereby starving it to a very slow death.

Maybe Isaiah should have been a horror filmmaker instead of trying his hand at love songs! I’m wondering if Isaiah had ever even heard a love song before! My guess is no. Now, even though it doesn’t say explicitly who the vintner is, we are lead by Isaiah to believe that it’s God. And I think that’s a safe assumption. What I think is not a safe assumption is Isaiah’s interpretation of events, namely, that this is really how God operates.

But before we get into that, the song ends with Isaiah singing, “God expected justice, but there was bloodshed; righteousness, but all God heard were cries of suffering.” The good grapes that God was expecting from God’s people were justice and righteousness. And we don’t have to guess what Isaiah is referring to by “justice and righteousness.” Those are clearly laid out throughout the whole of the Hebrew scriptures. They include feeding the poor, caring for orphans, refugees, and widows, welcoming immigrants, attending to the sick.

Again, not a lot has changed over the centuries. People are people no matter the time and place.  And it was this reality that caused Isaiah to take such a harsh stance against God’s people. Because Isaiah knew that if people would only strive for justice and righteousness the way that God had been calling them to for centuries, these world issues would not be issues. Even Isaiah and Hosea knew that there was enough food to go around for everyone, that caring for widows, orphans, immigrants, and the sick was within the realm of possibility if people cared enough. But people are people, no matter the time or place, and so Isaiah, like Hosea, was at his wits end. And so his harshness is understandable even if we don’t necessarily agree with it. So let’s address that now.

A drought? Who else controls the rain but God? They didn’t know about weather patterns and meteorology! So God caused droughts and since God is holy, God must have had a good reason to do it. We must have been really bad, they thought. Lose a battle? Who else could give them victory but God? So, every loss was chalked up to something they must have done wrong. How else could you explain God abandoning us on the battlefield?

These examples might seem kind of silly to our ears but this is the way they believed. You only have to take one ancient history or anthropology class to learn this. Every ancient religion began this way, including our own. What I continue to remind people is that just because we started that way doesn’t mean we have to stay that way! Because if I believed that God caused pain and suffering in the world through things like famine and plagues and war and, as in this case, the overthrow of a government, I wouldn’t be standing here as a pastor right now.

My faith just does not have room for a God like that. So, when I hear a prophet like Isaiah blame God for a calamity that has befallen them I just think to myself, well of course he did! He was a product of his era. But we are not. Today we know things like: plagues spread from unsanitary conditions, and droughts are caused by weather patterns, or pollution induced global warming but we don’t need to go there today, and battles are lost due to poor strategizing. We don’t need God to inflict these things on us. We do just fine on our own.

So, why do I continue to remind people of this? Because that type of ancient theology is still present today. Here’s an example: I was on internship in Alabama and my wife Sara was working for a hospice center. She had a family whose child had just died and when they were asked if they’d like a pastor they said yes. Only to have that pastor tell them that it was their lack of faith that caused their child to die.

When Sara heard this she was devastated for them, as well as angry, but when she apologized and asked if they’d like to see a different pastor, thinking me this time, they understandably refused. If that’s the kind of theology that the church is going to spread out into the world, then it’s no wonder that people are giving up on faith throughout the country! People aren’t stupid! They can see right through that bad theology, to the rotten grapes within. And it’s a misinterpretation of bible passages like today’s that perpetuate that bad theology, and quite frankly, destroys people’s spiritual lives. 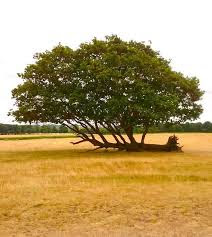 However, Isaiah is the most quoted prophet by New Testament authors, and for good reason. We may not agree with all of Isaiah’s theology but one of the reasons why Isaiah was quoted so often is because of the many seeds of hope that he planted that were allowed to sprout and bloom and flourish in our Christian scriptures. Today we read from two chapters, we’ve talked about the doom and gloom chapter, but the reading from the other chapter is much more hopeful. Isaiah writes about a stump, a stump with roots. Normally when you think of a stump you think death! But Isaiah’s stump, in spite of its death, sprouts a shoot from that stump! And the authors of our Christian scriptures identified that shoot as referring to Jesus. 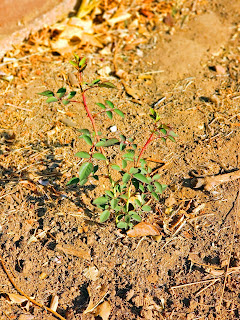 In spite of all that had befallen God’s people, and all that was about to happen to them, Isaiah knew, in his heart of hearts, that all was not lost. That even God could help them overcome death. And I couldn’t help but think of those darn rose bushes that we dug up in my new backyard/wilderness. They were not easy to dig up, and we tried to get as much of the roots up as we could. And all was good for a while, all except for this one rose bush. It has come back twice so far. It just does not want to die.

And who does? All it wants to do is live, and grow, and flower. I almost feel sorry for it. Almost. Third times the charm. The next hymn we will sing is Lo, How a Rose E’re Blooming. I did not pick it which made its selection all the more serendipitous. It was first printed in 1599 in Germany but the original author is unknown. As you will see in a moment the author clearly had this passage from Isaiah about a sprout from a stump in mind but why it’s interpreted as a rose I have no idea. I’ll give extra credit points to anyone who can find that out!

Whatever the reason may be, I know firsthand how difficult it is to kill a rose bush. And so, when you sing this song, my prayer for you is this; that you remember just how difficult it is to destroy God’s love for you, that no matter your circumstances God will never abandon you, that no matter how much pain and suffering you may endure, none of it comes from God, that no matter how hopeless things may be, God will always get the last word, and that word, will be life to you, in abundance. Thanks be to God. Amen.