Last week you read the story of Moses getting the Ten Commandments and today we read about Ruth. There are a few things that happened between those two stories. After Moses gets the Ten Commandments the rest of the book of Deuteronomy goes into all the other laws and regulations that they were expected to keep, because they didn’t stop at just ten! There was lots of fine print at the bottom of those first Ten Commandments! About another twenty chapters worth! Anyway, they wander the desert for a while and Moses dies without crossing into the Promised Land, that land that was promised to Abraham long, long before, or, for us about a month ago when we read that story.

With Moses dead, Joshua is appointed their new leader. He is the one to finally take them back to their homeland. And that’s putting it lightly, because what ensues throughout the book of Joshua is story after story of their conquest of this land because, surprise, people are living there now, it’s been a while since they’ve been home. So, what we get are basically a dozen violent chapters of them brutally taking back this land by force, and then ten chapters of how they divided it up among the twelve tribes. The book of Joshua is not exactly full of children’s bedtime stories. So, they have their land, they’ve become a fairly good-sized nation with a powerful enough army.

Now, you’d think the next logical step would be to crown a king but they consider God to be their king and instead they raise up these temporary leaders whenever there is a crisis, and these leaders are called Judges, which is what the book of Judges is all about, where we get are some fascinating stories with characters like Deborah, Gideon, and Samson and Delilah. And this is the time period that we also get this little house on the prairie story of Ruth, who gets a whole book dedicated to her, a short book but a whole book just for her. And she deserves it. But the context that this story falls in is just as important as she is, and here’s why. I believe, that God’s people during this period had lost their way once again.

Because that’s what we do right? We lose our way, God finds us once again, points us in the right direction, and before we know it, God finds us in a ditch somewhere in Donner Pass to bail us out yet again. But the reason why that context that I shared is so important is because they had just conquered this new land, and were now trying to keep it, and were so focused on claiming territory, and keeping outsiders out, that they forgot who they were, children of God. How do we know this? One, because of their behavior, and two, because they blamed their behavior on God. When I mentioned that they violently took their homeland, I wasn’t kidding. They were downright genocidal. And what did they say, God made us do it. Convenient.

Did you notice how I, all of a sudden, started talking about God’s people in the third person? Right around the genocide comment. As I was writing this the other day I noticed that I did that without even thinking about it, but the reality is, I should be saying we, not they, because this is our story too, a story that we, unfortunately, continue to play out, again and again. But, we know that God would not command acts of genocide, right? Please tell me that we can all agree on that. So, when we read stuff like that in scripture, we immediately know, that something else is going on here. Something is amiss.

And so, in the midst of all this violence and land grabbing, we get this little story, about a little family of farmers, and a little lady named Ruth, who has a great big lesson to teach her people, us. And this story, I believe, is a corrective to the narrative that is happening all around her, this narrative of us and them, of insider and outsiders, this narrative of those people vs my people that is being spread throughout the land. And Ruth comes along with a different narrative, that is just as counter-cultural today as it was then. So let’s dig in a little deeper. Like many great stories, this one begins in tragedy. Ruth’s family goes through hell. So much death in such a short amount of time. Something I know many of you know something about. All the men in her family die, and in that culture that could easily be a death sentence. 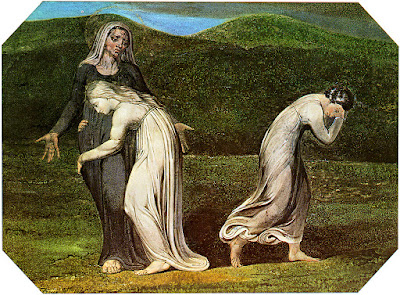 Naomi, the matriarch of the family, decides that this could not be the fate of her daughters-in-law. Not only were they still young but they had family back home in their native land that they could return to. Naomi had no one. Why should they suffer needlessly? Not only that but she was in the throes of grief. And what do so many of us do in times like that? We say things like, “I’m fine.” When we’re anything but. Or, “I’ll be ok.” When we have no idea if we will be. Or, “Don’t worry about me.” When we can barely dress ourselves, let alone get out of bed. We distance ourselves because we don’t want to bring others down with us. And that’s where Naomi was. So she tries to convince her daughters-in-law to leave her and make a new life of their own, to go restart back in their homeland.

She convinces one of them but Ruth wouldn’t budge. Ruth has a solid case to leave Naomi behind, guilt-free. Naomi is making it so easy for her to do so! Ruth wouldn’t budge. No one would judge her for walking away, it was the expected thing to do, that was the way of things! Ruth wouldn’t budge. As soon as she is done weeping in Naomi’s arms, she utters what may be the most endearing, loyal, loving, words of commitment that the world may have ever heard before, and maybe since. “Wherever you go, I will go; and wherever you stay, I will stay. Your people will be my people, and your God will be my God. Wherever you die, I will die, and there I will be buried.” I can’t imagine more powerful words of commitment. And I honestly don’t know why we don’t use those words as wedding vows.

In those words, Ruth completely redefines the phrase “my people.” She completely turns that concept on its head. By the world’s standards, Naomi wasn’t her people. Naomi’s God wasn’t her god. Naomi’s family was not of her blood. Naomi’s culture, Naomi’s food, Naomi’s clothing, Naomi’s dialect, Naomi’s politics, not of those things were Ruth’s! All the things that we take for granted, that give us a sense of home, of safety, of the familiar, of comfort, Ruth was willing to sacrifice for the one thing that none of those things could offer—love, and not just any kind of love, but faithful love, covenantal love, in Hebrew it’s called “hesed.” It’s difficult to translate into English. It’s the kind of love that causes you to redefine who you consider to be “your people.”

That’s some powerful love. We’re not talking about your everyday, run of the mill, sugary sweet, warm fuzzy kinda love. No this kind of love changes you, changes you, to your very core! Changes the very fabric of what makes you who you are! It changes you to the point that you may be unrecognizable, unrecognizable to the people who you once thought were “your people” but now realize that you had a whole family outside! That is the kind of love that causes Ruth to unlearn everything that she had learned about how the world works, how love works, especially the nationalism that Naomi’s people were currently engaged in. And here comes this outsider, Ruth, to remind God’s people of who they were. Imagine that!

But let me be clear about this kind of love, it’s not gonna be very popular, it’s not gonna win you a bunch of new friends, people aren’t gonna bust the doors down to get in here and hear about this kind of love. In fact, it’s gonna lose you some people, but I don’t need to tell you all that. This kind of love that Ruth teaches us is just too powerful for some to handle. And to be fair, Ruth didn’t even know how powerful this stuff was! Let me read you the opening verses of the Gospel of Matthew, “A record of the ancestors of Jesus Christ, son of David, son of Abraham:

Matthew goes on through Jesus' family line, which without Ruth, would not exist. This is what made up the savior of the world. And when Jesus story was told and they heard the name Ruth, you better believe that remembered hesed, the faithful love of this once immigrant farm girl, who reminded God’s people of who they were, of whose they were, with a love so faithful, it changed her and those around her, all the way down her family line to Jesus. That’s the stuff that he was made of. That’s the stuff that we are made of. Thanks be to God. Amen.