“The greatest lesson of this chapter, the lesson that kept hitting me, as I read it over and over again, was the stupidity of fighting God. God has made a universe that reflects His nature and is built on His law, and a man is a fool to live against the grain of that nature and that law. For a man to live in war against his Creator is stupidity.”

I hope most of you know me well enough by now to know that I did not write that! That was from a sermon back in 1973 by a guy by the name of John MacArthur. Had I been there that day, as an adult, because I hadn’t even been born yet, but if I had, he would have lost me immediately. I mean, I don’t need to come to church and be called stupid, I might as well just stay home if that’s what I want! And before you judge my family for that, keep in mind, you have not seen me at home! Seriously though, that sermon I quoted from is everything that is wrong with the church, both then and now. And it’s not just a handful of bad pastors to blame but churches too.

Our whole religion has had a bad habit of presenting ourselves to the world as if we have all the answers, that we know everything about God and faith, so much so, that a pastor can feel justified in calling a church full of people stupid. Because here’s the thing, who doesn’t struggle, struggle with faith, struggle with the faithful, struggle with the Bible, struggle with themselves, struggle with God? I hope you didn’t call me to be your pastor because you thought I don’t struggle with God and that I have this whole faith business all figured out! If so, I might as well hand in my resignation now! But I think I know you well enough by now to know that wasn’t the case, that you called me to walk with you, no matter where it may lead, even down a path that struggles with God.

There are a lot of things that I wish I was an expert in, there’s a lot of things that people assume I’m an expert in but am not, but one thing I can unequivocally claim to be an expert in is struggling with God! If you need an expert in that, I’m your guy! If they gave degrees in it, I’d have a PhD! This is why I love this story of Jacob and the wrestler. But first, how did we get to this point in the story from last week’s story of Sarah’s laughter? After Sarah had her son Isaac, she and Abraham had quite a few adventures. Sodom and Gomorrah, kicking out Abraham’s other son Ishmael and his mom Hagar, Isaac almost got himself roasted on an altar by his dad before God intervened and saved the boy, and Sarah eventually died first, at the ripe old age of 127.

Meanwhile, Abraham found Isaac the woman of Isaac’s dreams in Rebekah and blesses their marriage before he dies at the age of 175. Then Isaac and Rebekah have their firstborn, a set of twins by the name of Jacob and Esau. Jacob literally begins his life struggles right out of the gate. When he and his brother are born, Jacob comes out with one of his hands tightly grasping his brother’s heel, as if he was trying to be the firstborn even within his mother’s womb, but that was not meant to be.

And because of all that, they named him “heel.” That’s what Jacob means, “heel.” Can you imagine going through your whole life with a name like that? It certainly makes you wonder about the whole nature vs. nurture dichotomy, because Jacob struggled his whole life, but did they cause that or was that inevitable? But we can talk about that some other time. Point is, Jacob struggled, his whole life.

He was a momma’s boy to begin with, and we all know how unpopular that makes a boy among his peers unfortunately. His brother Esau was just the opposite. Not only was he his father’s son but he was big and strong and a hunter! The author goes so far as to point out just how hairy he was, even makes his hairiness a plot point in the story! Esau is painted in such a way by the author that you can practically imagine the testosterone dripping off of him!

He’s everything the stereotypical father could want in a son. Jacob, little Heel over there, not so much. He was small, smooth-skinned, was a great cook, and he loved his momma. Too bad he wasn’t born in the twenty-first century, lots of people are looking for a guy like that to make him their significant other! But alas, he was born in a backward time, like many of us were.

All this is to paint a picture for you of a man who just couldn’t catch a break. Life dealt him a hand that led to a struggle of some kind at every turn. And as such, he felt that he needed to take matters into his own hands if he was gonna have any kind of success in life, even if that meant cheating his way through. And that’s exactly what he and his momma did. In what is a very strange plot twist, lil’ Heel and his momma trick Esau into selling him his birthright, meaning that Jacob now gets all the rights and privileges of being the firstborn.

Now, that doesn’t mean much in our society but in theirs, that meant you got the entire inheritance! As the holder of the birthright, everything your dad owned upon his death would then be yours, no questions asked. So, when Esau finds out that he was fooled, he’s furious! So, Jacob runs away.

Then, in what is yet another strange storyline, Jacob marries Leah, so that he could marry the real love of his life, Rachel, I’m not even gonna get into that, you can read that one for yourself, but what I can tell you is that Jacob’s struggles continue to follow him. They end up having a huge family, and in spite of all his struggles, they do pretty darn well for themselves. And that’s when Jacob decides to go home, and that means facing his brother.

And that’s where we jump into the story. Jacob prepares to meet his brother like a spouse trying to make up with their spouse by bringing home flowers. I don’t buy my wife flowers nearly as much as I should but when I do it’s always an interesting experience. Have you ever seen someone standing in line at the grocery store with flowers in hand and wondered, “I wonder how bad they screwed up at home?”

I’ve actually been asked that! But you can tell by the kind of flowers, right? If they have a bunch of carnations, well, apart from not knowing how to buy flowers, you know they didn’t screw up that bad. But if they got roses! You know it was bad! And if they got more than a dozen? Whew! You better say a little prayer for them! That’s basically what lil’ Heel is doing at the beginning of our story. He sends his brother Esau a gift, a huge gift, to try and soften things up a bit before he gets there. Meanwhile, Jacob finds himself alone, not a minor detail, and we have a scene that is really at the heart of not only Jacob’s story, but all of God’s people. He encounters a wrestler, out of the blue, without any segue into this scene. He wrestles with this stranger all night 'til dawn. 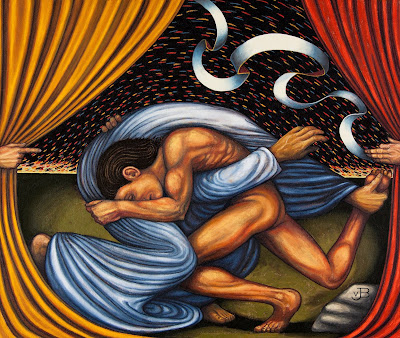 We’re never really given a clear answer as to the identity of this stranger. Over the past few millennia, scholars have said it was God, some have said it was an angel, some have said that it was his brother Esau, I myself wonder if it wasn’t himself that he was wrestling with. I think any and all of those possibilities are full of fruitful paths to travel down. I wouldn’t tell anyone they were wrong for believing any of those to be true. However, the one that I personally hope is the right one, is that Jacob’s mysterious wrestler was God, and here’s why. During this encounter, the wrestler changes Jacob’s name, Heel, a name that has been a thorn in his side his whole life. And what is it changed to? Israel, and the root of the name Israel is, you guessed it, “struggle.”

He goes from lil’ Heel, to lil’ Struggle! But instead of it being a sign of disgrace, it’s a badge of honor, as the mysterious wrestler said, because Jacob has “struggled with God and with mortals and won!” This new name, not only becomes Jacob’s new name, but becomes the name that God’s people will go by to this very day, Israel, the ones that God struggles with. And again, it’s not a source of shame, but a badge of honor. Whereas the god’s of their neighbors wouldn’t bother to waste their time wrestling with foolish mortals, Israel’s God, our God, will take the time to wrestle with us, even 'til dawn, if it means we’re gonna come out on the other side of that match, better, closer, maybe even more mature for the struggle.

Struggling with God is a sign that things are right with God, not wrong! Struggling with God is healthy, and faith-strengthening for us, not detrimental, not a sign of weakness! And it most assuredly is not a sign of stupidity! But rather, maturity. It’s like having that first fight with one of your best friends. If you two can get through it, past that first fight…friends for life right! That’s when a friendship ascends to a whole new level doesn’t it? Why would it be any different with God?

So, I think, as we talked about the other night at Faith & Froth, that this is one of the places that Christian churches have really faltered in years past. We have egotistically presented ourselves as people who have all the answers, never struggle with our faith, know everything there is to know about God, and when people have wrongly assumed that we are also “better behaved” than they are, we don’t correct them, we just let them believe that.

But what if, we were just open and honest with people, right out of the gate, about our flaws, about our struggles, about our divine wrestling matches, about our infighting, about everything? Why not? They’re gonna find out these things anyway if they spend more than a day with us! Why not be as transparent as Jacob’s name, Heel, as Israel’s name, Struggle. What if, instead of naming our churches names like Faith, or Bethlehem, or St. So and So, we gave them names like, Please Don’t Make Us Change Lutheran Church, or Our Budget Could Really Use Your Wallet Lutheran Church, or St. Struggles-A-Lot Lutheran Church.

Aside from turning a lot of heads, I think transparency like that has the potential to be a refreshing word of grace for so many people who avoid church like the plague for fear of being judged by us. So, hear me when I say, whether this is your first time here or you’ve lost count how many times you’ve been here, if you struggle, with faith, with scripture, with God…it’s OK! That’s the way it’s supposed to work! Nothing’s wrong with you or the church or with God. My hope and prayer for the church is that we can be open and honest about that with others and wear it like a badge of honor, as if it was our name. Thanks be to God. Amen.