So, I was on Facebook and I was reading what other pastors were saying about our story for today. They were going on and on, as pastors do, all about Abraham. They were debating things like, “Was Abraham being authentically generous here to these travelers, or did he know that they were divine all along?” On and on they debated questions like this. Abraham this and Abraham that! I almost chimed in and then I remembered how futile it usually is to debate with someone online, especially a pastor. They’re the worst! But here’s my problem with all their arguing and debating. I think they’re focusing on all the wrong things! Or should I say, the wrong person, because I think, the real star of this story is, Sarah. Not Abraham! But before we get into all that let me catch us up a bit.

As some of you will remember from last year, the Narrative Lectionary gives us the highlights, and as such it skips a few stories along the way. This is a birds eye view of the Bible. So last week we read the second creation story and this week we’re reading about Sarah. That means that we skipped fifteen chapters worth of stories. Some of those we read last year, and some we will read in years three and four and some we will just skip altogether because again, this is a birds eye view.

But, every week I will attempt to give you a quick synopsis of how we got to this point in the story from the previous week’s story. So, since the creation story, humankind fell into sin and got kicked out of the Garden of Eden, which quickly led to The Flood and destruction of most of the Earth. Then there was the Tower of Babel story before briskly moving to the story of Sarah and Abraham.

They are basically the first First Family, our original faith ancestors that began this journey with God. And they began as outsiders of the Promised Land, from a land called Ur, until God promised them a land of their own, also known as Canaan. And not only were they promised land but they were promised descendants. This promise really hit home for Sarah, as she had been unable to have children. And this is what makes our story for today so profound, and, as you’ll see, quite comical. They had other experiences too in between this initial promise and today’s story, like escaping a famine by moving to Egypt for a while where Abraham lied and told them Sarah was his sister causing a plague on the land, not to mention Abraham taking matters into his own hands and having a baby with one of their servants!

So, a lot has already happened in their life together, and by this point in the story where we jump in, not only was Sarah still unable to have a child of her own but they were both around a hundred years old! Which is partly where the humor comes into this story. They have been holding on to this promise for a long time now, so long that they had probably forgotten about it! I mean, if you were a hundred years old you would be completely justified in thinking, “Well, maybe I misunderstood the promise.” or “Maybe God was being metaphorical.” Whatever you might be thinking, no one, including God, would blame you for giving up on it. Little did they know however, that God had not forgotten the promise that God made to them so many years before. And that’s where we jump in.

I’m not going to go into who exactly these travelers were, we can talk about that in the Fireside room after worship if you’d like to join us, but Sarah and Abraham encounter a most unusual trio of travelers. It’s unclear whether Abraham recognizes who they really are but that really doesn’t matter because the way that it reads in Hebrew, God came with a message. After Sarah and Abraham finish showing them their generous hospitality, God not only tells them that the promise hasn’t been forgotten but even gives them an update on the timeline. God says that this time next year God will return and Sarah will have a baby boy. And that’s when Sarah, who was in the background this whole time, does the unthinkable…she laughs at God!

Now, over the past few millennia, theologians have shamed Sarah for this, describing her as being disrespectful, as doubtful, as unbelieving, and worse. However, in just the chapter before, God reminds Abraham of this promise and what is Abraham’s response? The author writes that he, and I quote, “fell on his face and laughed.” He literally was ROTFL! Who knows what ROTFL stands for? That’s right, rolling on the floor laughing! That’s the shorthand that you can use online when you want to share just how funny you think something is! It’s the shorthand for the emoji that you have on the cover of your bulletin. And God’s response to Abraham’s laughter was the same as God’s response to Sarah’s laughter. There was no judgement, no condemnation, no scolding, not even a slap on the wrist!

I imagine Abraham with a confused look on his face as he watches these two go back and forth, while he switches places with Sarah and moves to the background of this story. Here’s why I love this story so much. I think we have an unhealthy relationship between our faith and our humor. For Christians in particular, there seems to be this divide between laughter and playfulness, and our relationship with God, and I’m not sure where that comes from, because it’s not the case in other religions. 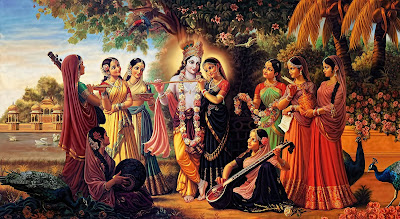 One of my favorite Gods, other than our own of course, is the Hindu God Krishna. Talk about some fascinating reading! Look him up online sometime and you will be in for a plethora of amazing stories, and also an insight into how that faith sees God and humans interacting. And my favorite story from their scriptures is a story about Krishna stealing the clothes from some gopikas, or the local young milkmaids.

So the story goes that Krishna was an extremely playful, outgoing young boy who caught the eye of every young girl in the land. They were infatuated by him but they also recognized his divinity as well, a fact that he was well aware of and even took advantage at times. Like this one time when he noticed that they had all took their clothes off to bathe in the river. So what does Krishna do? Takes their clothes, climbs a tree, and puts their clothes in the branches!

They notice and are horrified! They beg him to give them their clothes back but he refuses because he thinks it’s hilarious! Now, to our western ears we might think of this as sexual harassment but that’s not what this was at all as Krishna was still a young boy. So, the interpretation of this story goes something like this. Krishna knew that the gopikas suffered from a debilitating shyness. They were very spiritual but the one thing that kept them from being enlightened, a Hindu’s version of salvation, was this shyness. And so, this was Krishna’s way of getting them to come out of their shell. Of the two hundred gopikas that he stole clothes from that day, seven of them came out of the water and as soon as they did, they were instantly enlightened. That was Krishna’s gift to them. But they first had to play along with this game of his.

Now, why did I tell you this story and why is it one of my favorites? Because the Hindu religion has something that I am envious of. Their faith allows for playfulness, allows for teasing, allows for laughter with, and at, the divine. The closest thing we have come to this are those little statues of Jesus playing soccer!  I mean, come on! They have an element to their relationship with God that I find very lacking in our own.

Fast forward a year and Sarah is nursing a new baby boy whom they name Isaac, which means, “he will laugh.” She was literally nursing laughter. Our reading ends with some very profound words from Sarah. She says, “God has given me laughter. Everyone who hears about it will laugh with me.” My friends, our God’s promises are sometimes laughable, absurd even! Maybe they’re absurd to God too!

No matter, God invites you to laugh at them. God’s promise to love you no matter what? Laughable! No matter what you’ve done or said, or what you haven’t done or said, God loves you anyway? Laughable! You go right on ahead and laugh! As long as you make others laugh at those promises too. Laugh and spread that laughter until the whole world is laughing at God’s promises! As long as those promises are getting spread. Laugh! Amen.